“To be rooted is perhaps one of the most important and least recognized needs of the human soul.” -Simon Weil (1987:41)

Rootedness in one’s cultural heritage adds up to one’s sense of self-worth, identity, dignity, and healing. During this extended Covid19 pandemic lockdown, I had the chance to document the intricate processes of “diwin” or traditional pottery-making among the Kankanaey tribe, a group belonging to the Bila Pottery Industry Association (BPIA). The BPIA’s officers and members have a workstation in an old, rundown building on an acquired property by the association in Napakey, Bila, Bauko, Mountain Province.

According to Vice President Lourdes Binocyad, “han diwin et imparabor Apo Kabunyan ken datako” (pottery-making is a gift to us by our Supreme Being). “Tawid iman ay initdon di aalapo ed nabaon”.(It is a tangible cultural wealth passed on to us by our ancestors) remarked Esperanza Dayangadang, the BPIA President. In the past, potters bartered their earthenware with the residents of neighboring provinces like Benguet Province, and Cervantes, Ilocos Sur in exchange for sugar, legumes, meat, and other basic goods. Diwin has served to sustain life in the natural world. Now, patrons and supporters order and buy in cash, said Concepcion Felix, the PRO of the organization. 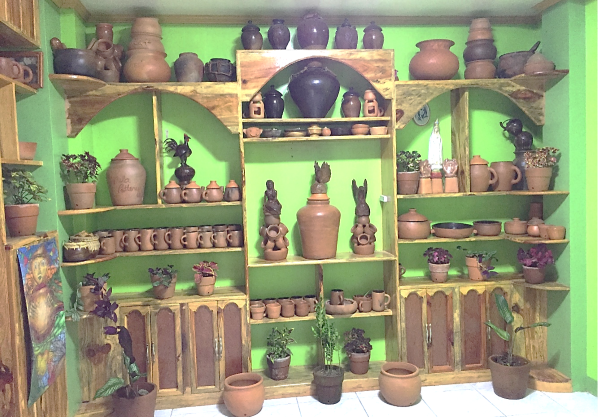 The Bila potters and patrons are grateful and proud of their ancestors’ generosity for passing on the tradition of earthenware making, recognized as part of Filipino Indigenous Knowledge, Skills, Spirituality (way-of-life), and Practices (IKSSP).

The Preparatory Stage: Getting up early for the morning walk to haul the clay

Our potters had been given the gift of knowing where to source the suitable kinds of soil for the clay pots: “boga” (75% of the clay mixture) which can be obtained in Kebasan, Bila, and the “kammagang” (25%) which are sourced in Alimit, Alipodopod, Otucan Norte, or in Balatian, Bila. The “Kammagang” is a very important component of “diwin” (pottery-making), serving as an adhesive/glue to the clay mixture for the earthenware.

Preparatory Stage: Menseka-screening, collecting, and hauling of clay from the mountain to the workstation 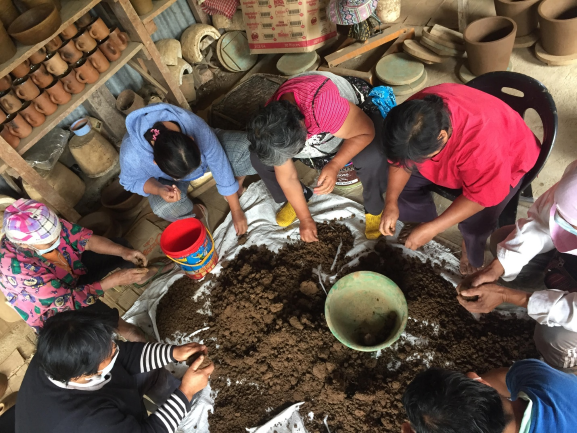 Clay Seasoning and Kneading — a process of sorting out small stones, grass, or tree-roots from the clay, then mashing and kneading it to achieve purity, smoothness and consistency. For these women, “menpispisil” the kneading process allows their hands and upper extremities to be flexed and soothed — a healthy and beneficial exercise for them. Photo credit: Reynante Ballada 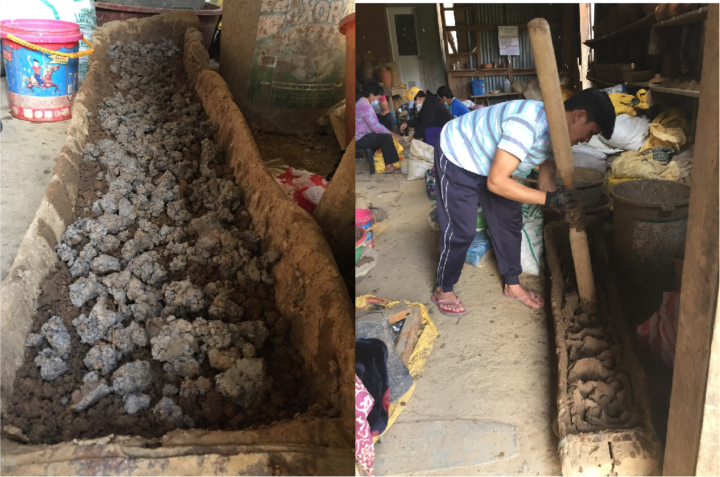 The Production Proper entails a lot of patience

The clay is placed on top of a round wooden tray called “bayangan” in Kankanaey or potter’s wheel. The “ligaligan” is another round tray that supports the “bayangan” as you can see below. The clay mixture is molded slowly by the hand, moving it upward, raising it to its desired height and shape. Then the mouth or lip of the pot is shaped using a piece of folded cloth called “damas” while turning the potter’s wheel slowly. The molded pot is air-dried before forming the bottom or base using a “pak-pak,” a wooden spatula, then air-dried again. Sun-drying follows right after. Using a “kaos” or a galvanized iron scraper, the potter starts scraping and removing the excess mold inside and outside to standardize the pot’s thickness. After which, the potter rubs the inner part of the pot using “madamad” and “gasagas” for the outer part. Both are a piece of cloth soaked in water used to feel if there are still small stones not removed during the mashing and kneading process. The pot is then air-dried again. The intricate process of “idi-id” (rubbing or smoothening) of the surface with a special polishing stone follows. Then the pot is dried under the sun to eliminate any moisture left. The value of patience is practiced in this intricate and slow process of pottery-making. I have observed that these potters go through the journey and the process effusively and deliberately rather than rushing to achieve a particular result. Without patience, these beautiful, natural creations will not materialize. 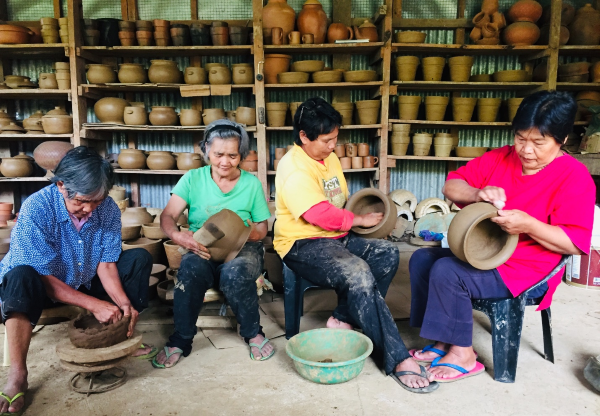 L-R: 1) Menbayang – setting in motion the earthenware molding. 2) Menpakpak – shaping the base or bottom from the flat surface of the potter’s wheel called “bayangan” on top of a “ligaligan.”3) Menkaos – scraping and removing the excess mold to standardize thickness. And 4) Men-idi-id – smoothening the surface with a special polishing stone.

Firing the Kiln and Glazing the Clay Products with “Libo”: The final stage

When the kiln used has reached its lifespan, it must be replaced with the construction of a new kiln, considering the size and shape of new products and innovation. “Bolibo” (dried twigs) and “agad” (dried grasses), or old scraps of woods are used for the firing of the kiln. When the pots are cooked at a relatively high temperature, they are then coated with a glaze called “libo.” The “libo” which smells like incense is sourced from the Almaciga tree found in either Zambales or Kalinga. The “libo” or glaze is a combination of black -brownish-grayish-green- yellowish glaze applied in liquid form to the hot vessel. This completes the process of pot-making before they are ready to be sold to buyers.

Evolving Innovation and Creativity among Potters 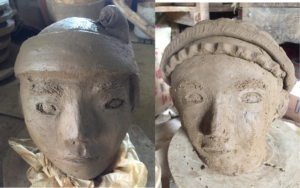 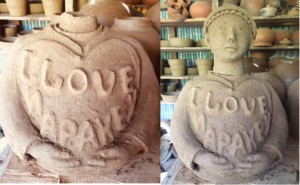 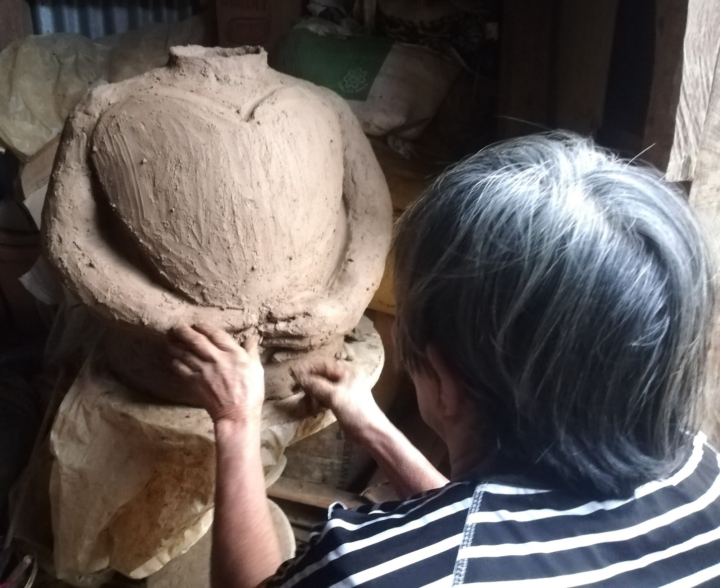 Despite the difficulty of getting multi-stakeholders’ support, and the challenges of postmodern day living, these potters are admired for their strong collaboration, concern for each other, and their openness to innovate while expressing evolving creativity. They view the tradition as a classroom where they use their experiences with the local government unit, and other entities as catalysts for change, decision-making in matters that directly affect them, and self-realization. During the interview, Virginia Balang, the BPIA secretary and lead artist of the group, Esperanza Dayangadan, President, with the help of the group were creating a life-size Igorot woman with the message “I Love Napakey,” and an Igorot man bearing the message “Thank You, Come Again.” After these new products have undergone firing in the kiln, they will paint the heart with a red color, the letterings with white color and display these life-size clay artworks as part of their community beautification effort.

Every December 27, the barrio of Bila celebrates the ‘Diwin Festival’ or pottery-making festival aimed to appreciate the contribution of the traditional potters in the promotion of the Northern Kankanaey cultural heritage and the flourishing of the identity of the Bila people. 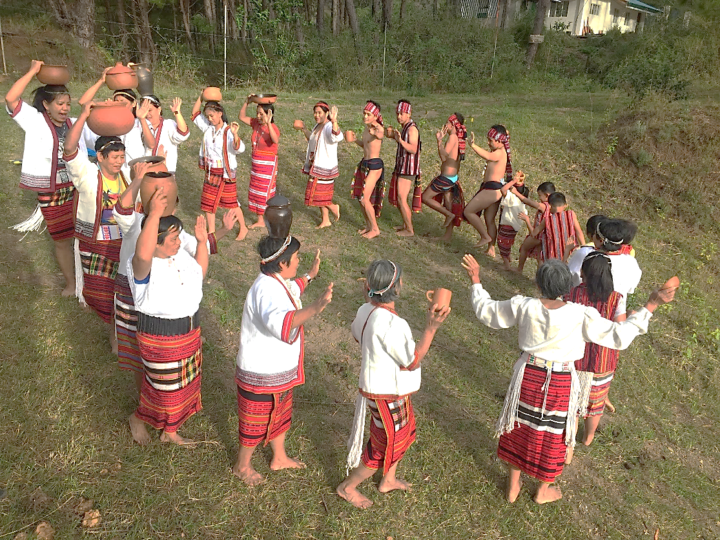 Well, these local potters will continue to survive if there are loyal patrons and buyers who will continue to purchase their pots for multiple usages: as decorative pieces, plant ornamentation, cooking wares, drinking water containers, and vessels for fruits, vegetables, and delicacies. 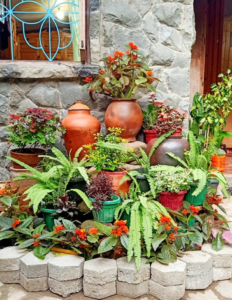 These potters have a special message to impart, mabiag tako ay naragsak, ya matago-tago tako ngam-in (may we live joyous, long, and healthy lives)!

Genevieve Balance Kupang (Genie) is an anthropologist, consultant, researcher, and advisor to individuals and organizations engaged in working for good governance, genuine leadership, justice, integrity of creation, peace, the indigenous peoples, preservation of cultures, and societal transformation processes. She is a peace educator, author, an inter-religious dialogue practitioner, and resource person with a career in the academe and NGO.