International Women’s Day celebrated on March 8 has become a day of marches for women’s rights and equality throughout the world. Although COVID-19 dampened participation in many countries, women still raised their voices on the streets on different continents, especially as the pandemic has worsened inequalities faced by women in terms of labor, household chores, and gender violence. In 2021, women and LGBTQ+ people marched against political and gender violence and for reproductive and sexual health. Here is a wrap-up from Latin America, the Middle East, Asia, and Europe on March 8, 2021, based on tweets and contributors’ photos.

Latin America and the Caribbean

In Buenos Aires, as well as other cities in Argentina, women and trans people gathered to protest against gender violence and the state’s failure to prevent femicides, despite reports previously made by the victims. 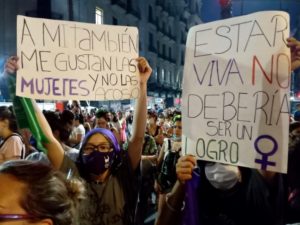 Left: ‘I, too, like women, but I don’t harass them.’ Right: ‘Being alive should not be an accomplishment.’ Photo by co-author Romina Navarro.

In El Salvador, women marched on March 7 for women’s rights and abortion rights. They performed the song and dance of the Chilean feminist song “The Rapist is You.”

“And the fault was not mine,
Nor where I was
Nor how I was dressed”

In Ecuador, Blanca Chancosa, a leader of the indigenous movement of Ecuador, performed an ancestral ceremony before the National Electoral Council of Ecuador in Quito. Amazonian women issued a collective statement and various communities and organizations marched in several cities of the country.

In Mexico, women turned the fences around the National Palace, placed days before International Women’s Day, into a monument to the victims of femicide throughout the country.

#RightNow
The slogans #MexicoGuiltyofFemicide, #LegalAbortionNow and #ARapistWillNotBeGovernor dressed the National Palace the night before #8M. The walls that protect the buildings were plastered with names of femicide victims from all over the country.

Young feminists, unable to take to the streets on International Women’s Day, protested and staged a sit-in at the Central American University (UCA) in Nicaragua. They protested against gender violence and for the liberation of political prisoners. 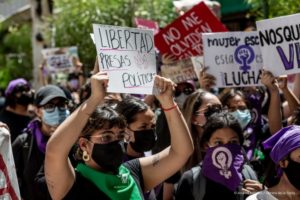 In Venezuela, women’s rights are deemed to have been left behind in the Bolivarian revolution, so several feminist groups on either side of the current authoritarian rule of Chavismo, have come together to demand action. Femicides and impunity around them have increased in the past year, along with poverty. 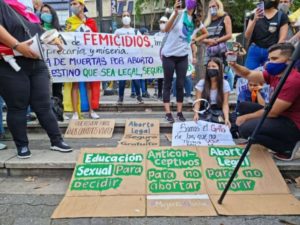 Israeli occupation forces raided an exhibition under the name of " Our Heritage is Our Identity " which organizered by Palestinian women in the #InternationalWomensDay pic.twitter.com/MwBOP3ONAk

Women fighters from the YPJ celebrated International Women's Day on 8 March in the Al-Hasakah province of North and East #Syria.https://t.co/pElhxMYTst pic.twitter.com/tcPSUqm4Wm

In Algeria, a rally of women protested the country’s Family Code, which is seen to treat women as second-class citizens, took place in Algiers to mark International Women’s Day.

“The Family Code belongs in the trash” At Didouche Mourad street

In Pakistan, the Aurat March (Women’s March) took place in various cities of the country as the third wave of COVID-19 hit the country. The tweet below was filmed in Lahore, and the shirts depict the ages of rape victims as well as the relationship they had with their abuser. The Aurat March also presented a feminist health manifesto this year to raise awareness about women’s health.

In Kabul, Afghanistan, Rada Akbar, an Afghan artist and activist, began her 2021 “Abarzanan” exhibition to celebrate the achievements of Afghan women by giving a tribute to those lost to violence in Afghanistan. Also, Afghans gathered for a street art exhibition at Rebel Art Cafe on March 8.

When we started @abarzanan 3 years ago I had never imagined we would go through this, holding the exhibition for the deceased but I think everything impossible is possible here; in the absence of justice, in the absence of peace. #IWD2021 pic.twitter.com/AuSKfMCznf

In Kyrgyzstan, the gathering paid tribute to women who have fought for gender equality.

It was unbelievable. Here’s how the marches in Bishkek and Osh went, read it here
Photo: @LexTitova

As Myanmar goes through a military coup, women used variations of the hashtag #htamineResistance (SarongResistance), alluding to the fact that the civil disobedience movement protestors hang women’s sarongs to block the military, as it is believed that men would lose their spirituality if they touch the sarong. Women have also been on the frontlines of the protests.

“HtaMain” Resistance, Yangon and Mandalay March 4, People are hanging women sarongs at the front lines of strikes to delay and deter the military junta security forces from entering. It is a wide spread superstition that walking under the HtaMain will loose men’s power/influence. pic.twitter.com/RngTSdj8KO

In Jakarta, Indonesia, women and non-binary people gathered under the rain to head towards the Presidential Palace. Yet, they could not reach their destination as the police blocked the main road and people got arrested.

Meanwhile, in Jayapura, West Papua, indigenous women initiated a rally. This march was also stopped by the police.

In Istanbul, Turkey, thousands of women came together for the traditional March 8 Feminist Night Walk. They chanted, “We are not silent, we are not afraid, we do not obey,” and demanded the implementation of the Istanbul Convention. The next day, 18 women were taken from their homes at night by the police and detained for participating in the march along with anti-presidential slogans; they have later been released on bail. 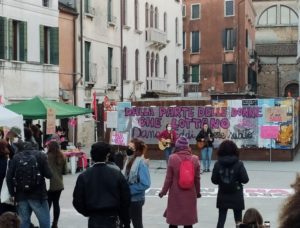 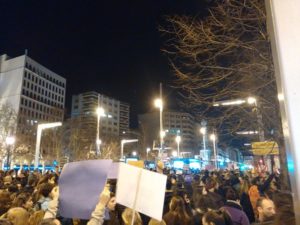 Demonstration at Women’s Day in Zaragoza / This file is licensed under the Creative Commons Attribution-Share Alike 4.0 International

In Paris, France, there were no physical demonstrations. However, a giant artwork portraying a clitoris was put in front of the Eiffel tower by feminist activists, entitled “Gang du Clito” (clitoris gang).

We put up a huge clitories in front of the Eiffel Tower with @gangduclito! #InternationalWomensRightsDay