A chaotic situation in Myanmar ensuing from the geopolitical struggle would have serious consequences for the security of India’s North Eastern region.

The Indian government has done the right thing by sending an advisory to the four northeastern states — Mizoram, Nagaland, Manipur and Arunachal Pradesh — to be vigilant about preventing large scale influx of people from across the border with Myanmar where the internal situation is deteriorating.

Authorities in Myanmar extended martial law in more areas of the main city of Yangon Monday amid reports of more killings of protesters at the hands of security forces. Authorities had earlier imposed martial law in a suburb of the city after several Chinese-owned factories were set on fire and about 2,000 people had stopped fire engines from reaching them.

The Chinese Communist Party daily Global Times has alleged in an editorial that “The violent attacks were apparently well organised and planned”. The editorial hinted that the protests in Myanmar and the arson against Chinese establishments are being coordinated from abroad. Beijing traced the twitter account of Founder and Executive Director of Burma Human Rights Network, operating out of London since 2015, for inciting the unrest in Myanmar.

The BHRN is known to be linked to the British intelligence. An established pattern of colour revolution stirred up through the social media is repeating — as had happened in Hong Kong, Thailand and Belarus recently. For the past several weeks, BBC, Radio Free Asia (US-funded), Voice of America, etc. have been on overdrive regarding Myanmar closely coordinating with the young revolutionaries in Yangon.

The Global Times disclosed that the US asked China to condemn the Myanmar military and impose sanctions against it. But, “China will certainly not accept it. Actually, none of ASEAN members has the same attitude as the US and the West. Myanmar’s neighbouring countries have coincidently held the same stance with profound, realistic reasons. This is in line with the moral principles of independence and autonomy of each country. The West has no right to point an accusing finger at them.”

The Russian assessment is also that the West’s motivation in stirring up the Myanmar situation is “cynical” — with a view to “make problems for China.” A commentary in the Sputnik said, “Western powers sense they have China over a barrel with Myanmar due to its strategic economic interests. If China doesn’t condemn, then the anger of Myanmar protesters can be directed at ripping up infrastructure. If China does condemn, then it is being put in to sour relations with Myanmar’s military rulers. The Western powers appear to be ratcheting up the vice-like position.”

“The Biden administration has made it abundantly clear that it is ramping up the geopolitical rivalry with China even more than the previous Trump administration. Washington wants to clamp down on China’s rise as a global power. By targeting Myanmar, the United States and its Western allies calculate that they can damage a key node in China’s new Silk Routes for its lucrative global trade and economic expansion.”

Chaos in Myanmar, which has a strategic location on China’s periphery, suits the West. It will block China’s access to the Indian Ocean from Yunnan via Bay of Bengal. Creating instability in the peripheries of Russia and China is a template of the US’ containment strategy. The intention is to stir up colour revolution, instal pro-US regimes via local proxies and encircle Russia and China in an arc of hostility. The colour revolutions in Georgia and Ukraine met with success. The attempts by the western intelligence to create turbulent conditions to undermine the established order in Hong Kong and Belarus failed. Thailand and Myanmar are work in progress.

However, from the Indian perspective, what matters most is not the geopolitics of Myanmar but that this is all about a neighbouring country with which it has a 1600 km border. A chaotic situation in Myanmar ensuing from the geopolitical struggle would have serious consequences for the security of India’s northeastern region, which has historical, cultural and ethnic links with the tribes inhabiting the border regions of Myanmar.

A large scale influx of these tribes into India due to the chaos in Myanmar and the breakdown of state power, is becoming a high probability. It must be prevented at all costs. Global Times was spot on in forewarning that “Various ethnic groups live in Myanmar, resulting in complex contradictions within the country. An active interference in Myanmar’s domestic affairs will bring unbearable consequences.” 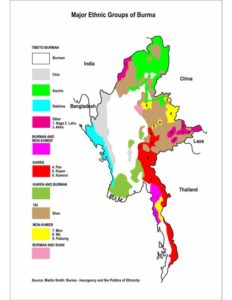 Alas, outsiders are largely unaware of the complex inter-ethnic equations in Myanmar. Broadly, there are more than 20 different ethnic armed formations in Myanmar who are estimated to have around 70000 fighters operating mostly in remote jungle mountain areas where some of them control territory which is notionally under the central govt, while others are waging guerrilla war for decades.

Any notion that these non-Burman ethnic groups could team up with the protestors (Burmans) in Yangon or Mandalay and form a unified force is pretty fanciful. In fact, the Burman politicians drawn from the central region (Aung Saan Suu Kyi’s NLD) have hardly any moorings in the peripheral regions.

For good reasons, today, these non-Burman ethnic groups are not receptive to the appeal by the NLD for unity to confront the military. They harbour a strong sense of disillusionment / resentment that the “benefits” of democratic rule under the NLD headed by Suu Kyi through the past decade never really percolated to them. In fact, in a lot of those ethnic areas, the conflict actually increased and more human rights violations took place during the past 10 years than before. Suu Kyi and her government were also silent about these human rights violations. They didn’t condemn them or try to stop them. They even branded some of the ethnic groups as terrorist organisations.

Herein lies the paradox. The heart of the matter is that the NLD is a staunchly (Burman) nationalist party. Now, Suu Kyi’s father had founded the Burmese military as a symbol of Burman nationalism — and the military became the bulwark for the newly created state after independence with the Burman as its ethnic base. Suu Kyi herself has been mindful that the military as an institution must remain as the “steel frame” without which Myanmar, a mosaic of over 135 ethnic groups, would disintegrate into countless fiefdoms locked in warlordism or civil war.

Inevitably, India’s northeastern region will be sucked into the tribal wars and ethnic strife inside a chaotic Myanmar. The population in India’s northeastern region have a strong sense of kinship with the ethnic groups across the border. Christianity is the second largest religion in Myanmar, making up close to 10% of the population already. It was no coincidence that in 2017, the Pope undertook an evangelical mission to Myanmar.

Newsclick
Newsclick is a New Delhi-based independent media organization that focuses on covering people's movements, struggles and a host of issues that corporate media chooses to ignore.