The United Arab Emirates made history on Tuesday by becoming the first Arab nation, and the fifth worldwide, to send a probe to Mars.

Officials have lauded the symbolic importance of the mission, which they say will inspire a new generation of Emirati and Arab youth to begin careers in the sciences.

Yousef Al Otaiba, the country’s ambassador to the US, even called it “the Arab world’s version of President John F Kennedy’s moon shot”.

But what led the gulf state to make the decision in 2013 to devote resources to such an ambitious program? 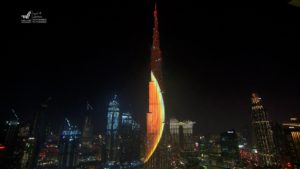 View of the Burj Khalifa as the UAE waits for its Hope probe to enter Mars’ orbit. (File photo)

Although, like many of the UAE’s achievements, the Hope mission was supported by the expertise of foreign specialists, a clearly stated aim of the program was to develop Emirati capabilities in the field.

The UAE government told the project team that simply purchasing the necessary equipment was not good enough. The probe had to be built by Emirati engineers.

More than 200 of the country’s brightest engineering minds worked on the development of Hope, both men and women. It was largely built in the University of Colorado’s Laboratory for Atmospheric and Space Physics (LASP), with significant work also taking place at the Mohammed bin Rashid Space Center in Dubai.

LASP engineer Brett Landin said in an interview with the BBC that after developing the probe, the UAE’s engineers are now in a good place to build spacecraft independently.

The Hope probe was launched from Japan’s Tanegashima spaceport on July 20, 2020 after two scheduled launches had to be canceled due to bad weather.

It is equipped with three state-of-the-art scientific instruments intended to collect data about conditions on the red planet.

The first is EXI, the Emirates Exploration Imager, which will study Mars’ lower atmosphere using visible light, much like a conventional camera. It will produce high-resolution images of the planet’s surface and measure the depth of ice using optical technology.

EMIRS, the Emirates Mars Infrared Spectrometer, will use infrared technology to measure the distribution of dust, ice clouds, water vapors, and different temperatures throughout the planet’s lower atmosphere.

EMUS is Hope’s Emirates Mars Ultraviolet Spectrometer, which uses ultraviolet light to examine levels of carbon monoxide and oxygen in the atmosphere, and will study how these levels change over certain periods of time. 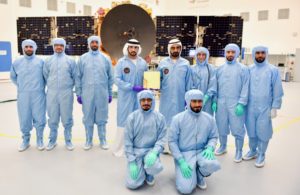 In the rhetoric surrounding the historic mission, leaders have been keen to stress the importance of inspiring a young generation of Emiratis to realize a passion for the sciences.

A country that has geared much of its industry towards diversifying from an oil-rich economy, the UAE’s Mars mission was a project that clearly intended to display a bright future for the emirates.

Crown Prince Sheikh Mohamed bin Zayed said on Tuesday that “the Emirati youth will be the ones leading our development for the next 50 years with their acquired knowledge and skills.