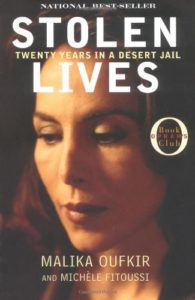 I read Stolen Lives twice. The first time, I couldn’t put it down because it was just shocking. The second time I read it, (for this review), I found new things to be shocked by. Talk about shock overload.

Malika Oufkir lived in the palace of the King of Morocco from age five to 10, before she returned to live with her own family. The Oufkirs was initially placed under house arrest from 1973 to 1977 in a faraway home that they didn’t own. They were punished because of a failed coup d’etat, by their father. General Oufkir was killed. In prison, the family:

Over time, their weaknesses became a formidable force, leading them to plan and successfully escape. However, they were recaptured and placed under house arrest in 1987. They were released with three other political prisoners in 1991.

When they were first arrested (in 1972), Malika was the eldest at 20 years old, followed by her brother Raouf, 18, younger sisters, 9, and Soukaina, 8. The youngest, Abdellatif, was 3 years old. Her mother, Fatima, was 35. Malika wrote Stolen Lives, published in 1999. Since then she has written a new book, Freedom. But it is largely agreed that to appreciate the second book, you have to read the first.

Malika’s life before the family was arrested

Princess Lalla Mina shared her bedroom with Malika. The Princess had every single toy she ever wanted. Lalla Mina also loved horses, and Malika, who hated horses, was forced to learn to become an equestrian. It seemed to be a charmed life, but it was a cloistered life, almost like a prison.

Malika returns to her family at age 15

When King Muhammad V died, there was a suspicion that his son and heir, Hassan II, had a hand in it, the New York Times reported. Still, life remained the same for Lalla Mina (Hassan II’s youngest sister from another woman in the harem) and Malika.

Muhammad V’s harem remained, but Hassan II built a new complex in the Palace grounds for his own harem. Hassan II had nude parties in the pool with his entire harem. Malika, then nine years old, joined these swimming parties. She refused to take off her underwear, causing King Hassan II to tear it off her.

At age 15, Malika asked to return to her family. This is because the King had planned to either add her to his harem (which she didn’t want to do) or marry her to the son of a general. Since she went home, neither happened, and she finally experienced freedom and a life of sophistication far different from the cloistered Palace life.

Her mother often brought her to Paris to go shopping at the most expensive stores and she went to bars with her friends and met the crème de la crème. Everything changed when her father, General Mohammed Oufkir, attempted a failed coup d’etat. Oufkir was killed at the palace, and his family was jailed.

The Oufkir family in jail 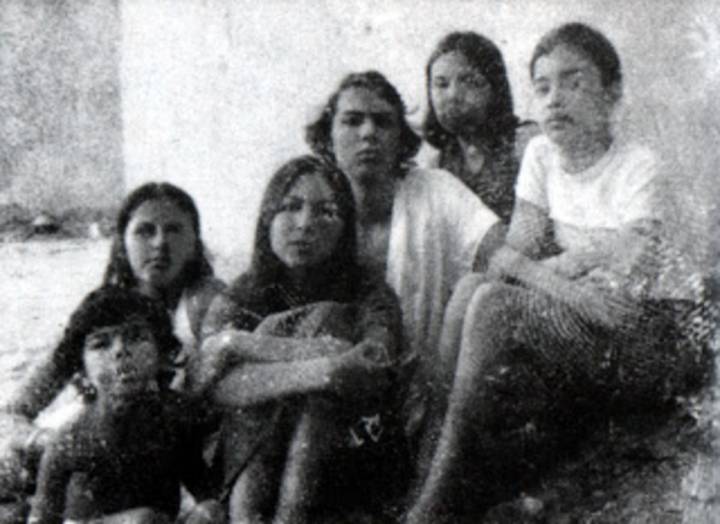 From Failed Suicides to a Daring Escape

They lived in filthy surroundings, had very little food, often fell ill but were not given medical treatment. Miryam, the middle sister, was epileptic. Initially, they lived in a broken-down, filthy home but they were together, had access to newspapers, books, and radios. They were also given medicine for Miryam.

But over time they were moved from prison to prison, each worse than the last, until their final one where they could not see each other and the rooms were locked. Fatima, the mother, shared her room with Abdellatif, the youngest son. Malika shared her room with Soukaina and Miryam. Raouf was alone in his room.

Their spirits were so low that they went on a hunger strike. When Raouf fell down in the garden on his daily walk time, he was left there in a half coma. He overheard the guards say that they were meant to die there. At that point, he forced himself up and back to his room.

The family had devised a communication method, through which Raouf revealed the police’ conversation that he overheard. They decided then to escape. They had a spoon and the cut top tin of a can of sardines and their hands. Raouf told them to dig down until they hit clay, then to dig horizontally.

Every day they had to hide their hole from the police who regularly checked their rooms and their things. Eventually, they managed to dig beyond the area of the prison, and Raouf, Malika, Soukaina and Adellatif escaped together.

More shocking stories followed. The very good friends of the Oufkirs refused to know them or to help them. A stranger, however, let them stay overnight and gave them food. When Malika took off her shoe it was stuck to her foot, and her dress was stuck to her leg. They were given new clothes.

The irony of the story of the Oufkirs, as I see it, is that despite all of the pains they went through in prison, including seasonal pests – frogs, scorpions, mice, rats, cockroaches that were so plentiful they just crawled on their faces – they all outlived their captor, King Hassan II, who died on July 23, 1999.

Where are the Oufkirs now?

When the Oufkirs were free to leave Morocco, they all went to Paris in the 1990s, according to Oprah.com. But what are they doing now?

Fatima, mother of Malika and her siblings, remained a Muslim. She spent her life trying to recover the family wealth in Morocco until she died on December 15, 2013, in Casablanca. She never got to recover anything. On December 17, prayers were said for Fatima in a mosque in a small town (Sidi Allal El Bahraoui), followed by her burial in the cemetery Sidi Mohamed Ben Abdellah in Morocco. No press coverage was allowed despite appeals by Soukaina, Malika and Raouf, three of her six children, according to Le 360.

All of Fatima’s children have converted to Roman Catholicism.

Malika, as of this writing, is 67 years old. In October 1998 Malika, then 45,  married Architect Eric Bordreuil. They adopted the 2 ½-year-old daughter of her sister Myriam.

According to a December 2001 issue of The Australian Woman’s Weekly, Malika had contemplated suicide for two years. Then she became an international celebrity upon the publication of her book, Stolen Lives: Twenty Years in a Desert Jail. Her New York Times bestseller landed her an episode of the American news show, 60 Minutes special, and US Cosmopolitan named her Woman of the Year. But she completely stopped thinking of suicide when Oprah Winfrey told her on her show, “I wanted you [here] so I could say in front of millions of people, ‘You are my hero.’”

That same article said that Malika still lives in fear, spending most of her time in her small and dark bedroom, (like a cell), because she’s afraid to go outside. She sleeps to the sound of the television, a contrast to the suppressive silence of jail. Malika wrote a second book, Freedom: The Story of My Second Life.

In 2003 Malika and her husband moved to Miami, Florida. By 2006 the couple’s adopted daughter was 10 years old. For seven years they tried to conceive, but doctors told her that unattended illnesses can cause irreparable damage. In sum, her time in jail left her infertile. She then entered “her third life”, adopting a boy from Morocco, according to Miami New Times. They were hoping to get a visa for the child so that he could live with them in the United States.

Soukaina, as of this writing, is 58 years old. She wrote her autobiography, La Vie Devant Moi, which describes her family’s prison experience. After her family was freed, Soukaina finished high school with merit at age 36. She pursues art and is a painter, according to Oprah.com. A 2012 article on rfi said she was also pursuing a singing career. Her songs include Il Y A Toi, and Cours. She composes her own songs, and has had a few concerts. According to a 2009 article in Le Monde, ever since Soukaina came to France, she had awakened every day surprised to be alive. Musicologist Martin Guerpin said, “Her great strength is to succeed in making people forget who she is. We listen to her for her personality, the beauty of her music, the extreme poetry of her lyrics, not for the names of Oufkir.”

Abdellatif is 52 years old. When the family moved to Paris, Abdellatif stayed close to his mother. We don’t know how his life changed after his mother died. What is known is that he wanted to be a pilot but lacked the money for training. He plays soccer and has a passion for the sport, according to oufkir01.  A 2001 article mentioned that Abdellatif  lived alone in a Paris studio, “without friends or prospects.” He also avoided family get-togethers, as they reminded him of their life in prison.

Raouf is a journalist for a Berber paper and travels between Paris and Rabat, according to Oprah.com. He also wrote the books, Life Before Me, The Guests: 20 Years in the Prisons of Hassan II, and Why Fundamentalism Threatens Us. He has two French books, namely, Kahena, la reine guerrière (Romans historiques) (French Edition)  and Kahena, la princesse sauvage: L’IMPERATRICE DES SONGES T.1 (Romans historiques) (French Edition).

Myriam lived in Paris with her husband, according to Oufkir01. She was working on a collection of photos that will illustrate her own poems. She also has a license in educational psychology, specializing in children with difficulty. She has a daughter who was adopted by her sister Malika because of her epilepsy and continued trauma as a result of the family’s imprisonment. These may sometimes keep her in bed for days. She later divorced her husband, and moved to  California, according to Oprah.com.

I really learned a lot from this book, and have read it more than once.  I hope you will get a copy of the book and read it as well.