Five months on from the devastating port explosion that killed over 200 people, and injured thousands more, the UN has invited Beirut residents to share their hopes and fears for the future of the city, and for Lebanon, which remains in crisis.

“This explosion burnt our hearts”, says 40-year-old Farah. She is one of the Beirut citizens who agreed to be interviewed by a UN video team, on one of the streets most damaged by the explosion, and reflect on the disaster that befell the city on 4 August. 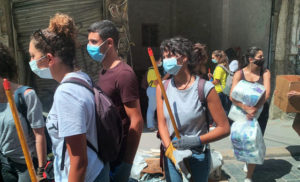 Youth volunteers help to clear the rubble clean-up in Mar-Mikhael, one of the areas worst hit by the blast., by OCHA

Even before the explosion, Lebanon was facing grave difficulties, struggling with civil unrest, increasing poverty and unemployment, as well as soaring numbers of COVID-19 cases.