In his wide-ranging annual media conference held Dec 17, Russian President Vladimir Putin expects the newly elected U.S. President Joe Biden and his administration to build back better relations with Russia and further to cooperate in resolving a number of pressing regional problems around the world. 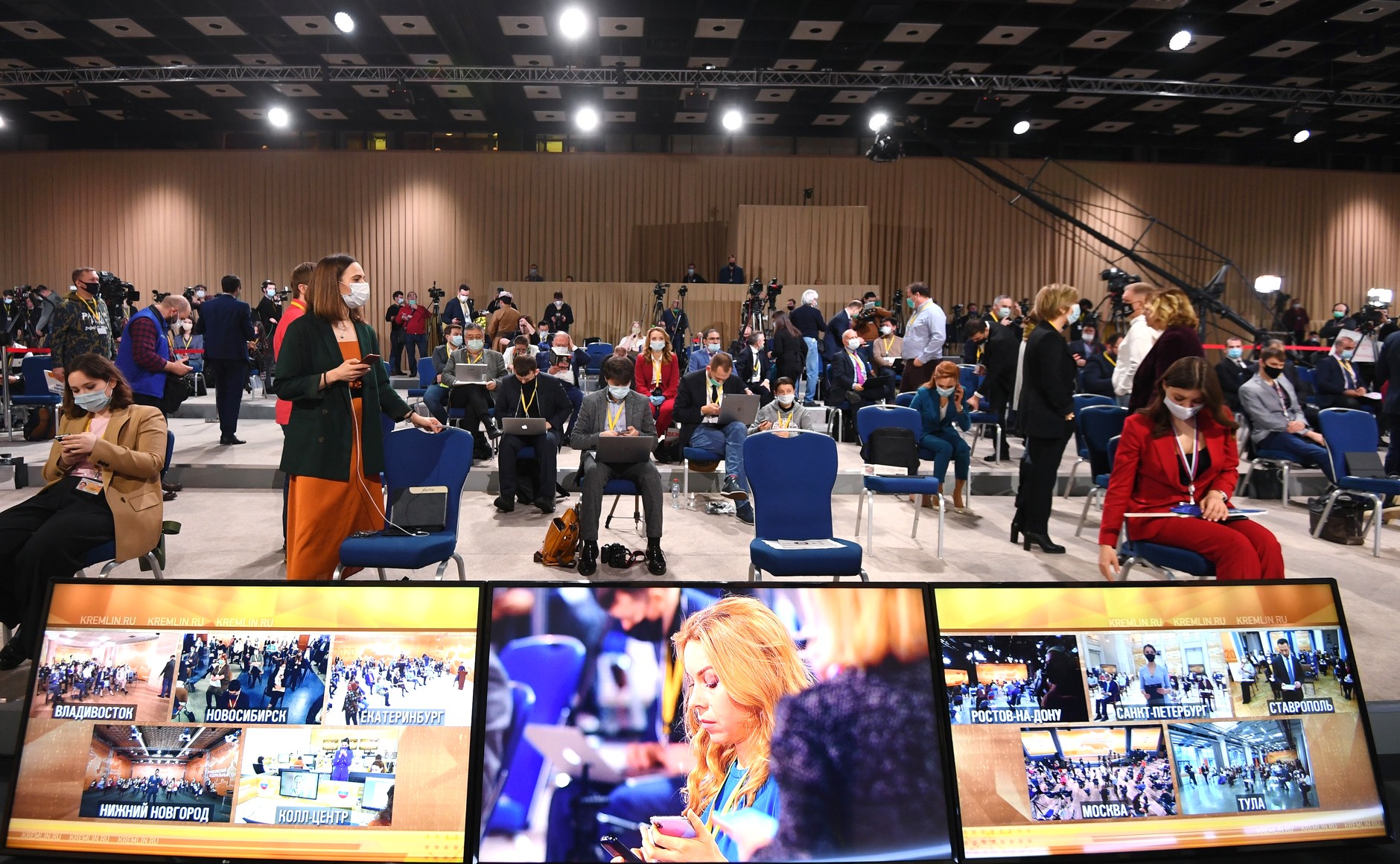 “The Russian-U.S. relations have become a hostage of the U.S. domestic policy. In my opinion, it’s bad for them but it’s their choice, let them do what they want. We believe the U.S. president-elect will sort things out due to his domestic and foreign policy experience and hope that all arising problems, if not all then at least some of them, will be resolved during the tenure of the next administration,” Putin said at his annual press conference.

For example, speaking about new arms race, the president made it clear that this race has been going on for a long time – since the US withdrew from the ABM Treaty in 2002. The only arms control agreement that is still in effect is the New START Treaty, and even that, according to Putin, will end in February 2021. That however, Moscow is ready for dialogue on this topic with the new US administration.

The other issues of international relations focused on Belarus, Nagorno-Karabakh, Moldova and Kyrgyzstan. Touching on the steps by the Ukrainian leadership to resolve the conflict in Donbass, Putin noted that Russia will not only continue, but will bolster its support for Donbass. As for Nagorno-Karabakh, Putin said that the situation there erupted not as a result of outside interference.

Referring to interference in each other affairs, Putin explicitly pointed in his comments at the conference attended by both local and foreign reporters that Russian hackers did not help the Donald Trump campaign and did not interfere in the U.S. electoral process.

During the conference that lasted for about four and half hours, and intended to round up or summarized activities of the year, Putin also discussed at length various important questions both internal and external, particularly the economy and health central to Russians. Some of the domestic issues are discussed as follows.

On the current situation with coronavirus, Putin reminded efforts that are being taken inside Russia, called to global cooperation in the fight against the pandemic. While Russia claims to be the first in the race for vaccine, Putin said that cooperation between the Gamaleya Research Institute of Epidemiology and Microbiology, and that of AstraZeneca on a coronavirus vaccine is particularly important for the whole world.

“There are a lot of rumors indeed, but I wouldn’t like to talk about this to the whole country and the whole world, especially considering that we don’t see any evidence confirming the accusations leveled at anyone. We should focus on something else, not look for culprits but combine efforts to fight the problem, and this would be the right line of our cooperation,” he said

The Anglo-Swedish AstraZeneca is ready to work with Russia, and is in the process of signing a corresponding agreement. This is very good especially top-notch specialists – this is a large and good company with a global reputation – join forces, including with their Russian partners.

“Thank God, our foreign colleagues turned their faces towards us too and are ready for cooperation, they’re struggling with something, and the AstraZeneca company is ready to work with us, a relevant agreement is signed now. It is excellent, I am happy when experts of such a high level, – and it’s a good major company that’s internationally renowned – when they join efforts with Russian partners among others, I am sure the results will be a very good thing not only for our citizens, but the whole world,” he said.

Putin explained that as the pandemic ranges on, millions of coronavirus vaccine doses will have be produced in Russia at the beginning of next year. The primary objective is to vaccinate the Russian population. “Production of this vaccine requires relevant plants, enterprises, and hardware – all that will be scaled up. I expect all of these plans to be fulfilled and production of millions of vaccine doses to be ensured next year, at the beginning of the year,” he said.

With regard to cooperation with other countries, it will boost the technological capabilities, enterprises to produce the vaccine, foreign countries will invest their own money into expanding their production capacities and purchasing the corresponding equipment.

Foreign countries will be investing in these projects: the enlargement of production facilities and the purchase of equipment. “As for cooperation with foreign countries: nothing is stopping us from manufacturing vaccine components at facilities in other countries precisely because we need time to enhance technological capacities of our vaccine manufacturing enterprises. This does not hinder vaccination in the Russian Federation in any way,” he said.

He spoke extensively about domestic economy and measures that are needed to improve the situation. “We all know that this was a challenging year, to an extent that I can hardly find the right words to describe it. It is a matter of concern for all of us: the coronavirus pandemic. However, not only Russia, but also the entire world has been hit by this scourge,” he stressed.

What is a pandemic? It means lockdowns, curbed production, declining passenger and cargo traffic and all that goes with it. Unfortunately, it also means fewer jobs, and lower incomes. This has all become a reality.

“As I have said at the outset, this is a challenging situation. When I said that the pandemic caused the shutdown of several manufacturers, rising unemployment and a decline in disposable incomes, these were not empty words, and not something that can be overlooked. This means that we see and understand what is going on,” he said.

Unemployment rate in Russian was 4.7 percent at the beginning of 2020; now, as you know, it has grown to 6.3 percent, he pointed out, and added, “Everything we do to support the economy, to support the affected industries, is aimed at maintaining employment. We have [unemployment at] 6.3 percent now, but I hope that over the next year, we will be able to bring it down to the earlier figures. A positive trade balance be considered as a good indicator. It creates conditions for good macroeconomic development.”

Of course, there is a plan, according Putin. Reducing the number of people below the poverty line is one of our key priorities. First, here is the plan: by 2030, the need to bring down the share of the population living in poverty from the current 13.5 percent to 6.5 percent. Having 6.5 percent of the population earning less than the subsistence level is still not good, but the need to be realistic. This is a far-reaching, but feasible goal, according Putin.

He, however, offered an elaboration on what should be done. “But the main point, is that we need to develop the economy, reach the national development goals and implement national projects that contain these goals, create new jobs, raise the economy to a new level meeting the latest requirements, as well as develop artificial intelligence, digitization and modern production lines that would allow people to have interesting jobs and receive decent incomes. The entire package of our measures envisaged by the national projects aimed at reaching these goals.”

Putin used the platform to promote Russia’s domestic tourism. He urged the media, those who work online to support the development of domestic tourism, show and talk more often about the opportunities that the country and its various regions offer for Russian citizens and guests from abroad. In general, it would be great if Russian nationals explore domestic tourism opportunities more. They can benefit from the related government support measures and go to St Petersburg. There is no need to open borders for this.

Air travel has been among the affected sectors. “In this sense, it is definitely important to enable airlines to serve Russian destinations and for our companies to operate overseas routes. We have 32 million people flying abroad every year. Let’s redirect this passenger flow to St Petersburg. These people spend $35 billion abroad every year. If we can attract them to domestic destinations and thus promote domestic tourism, this would be great. St Petersburg deserves it. I am certain that we will succeed. It will happen as soon as it becomes possible,” he said about domestic tourism.

“The government should provide the necessary support, of course, infrastructural primarily. We will allocate appropriate funds for this; money has been earmarked. As I have said, we will support business in general, including regional businesses, and an agency is being created that is responsible for domestic tourism exclusively,” he informed the conference participants.

Putin’s first news conference in 2001 was also the shortest one lasted for one hour and 35 minutes. In 2019, Putin spent 4 hours and 18 minutes on the podium in front of the audience to answer questions from 57 mass media outlets.

As usual, the news conference was broadcast live by Rossiya 1, Rossiya 24, Channel One, NTV and MIR television channels, as well as Mayak, Vesti FM and Radio Rossii radio stations. According the official document, a total of 774 journalists were accredited at the news conference, including 237 at the International Trade Center.

Due to the current coronavirus pandemic, there were special platforms set up in all federal districts (Tula, St. Petersburg, Rostov-on-Don, Stavropol, Nizhny Novgorod, Yekaterinburg, Novosibirsk and Vladivostok), where representatives of regional media participated and asked questions, while some representatives of federal and foreign media representatives worked at the World Trade Center in Moscow.

Kester Kenn Klomegah
Kester Kenn Klomegah, who previously worked for the Inter Press Service (IPS), is an observer of socio-economic and political development issues in former Soviet republics, particularly in the Russian Federation and Eurasia. He enjoys travelling and visiting historical places in Eastern and Central Europe. Klomegah is a frequent and passionate contributor to Pressenza Media.