A UK citizen who has been living in France for 36 years has brought a case to the Court of Justice of the European Union that could have profound implications for British people living in European countries after Brexit. The woman is hoping to retain some citizenship rights after she ceases to be a European citizen.

British people arguably lost their EU citizenship on January 31 when the UK ceased to be a member state. This changes their rights when it comes to living and working in EU countries – and even in travelling freely in the EU. When the Brexit transition period ends on December 31 2020, a period of major uncertainty begins.

The law is never simple. When the rules on citizens’ rights were drawn up, it wasn’t with a view to working out what to do if a member state ever left the EU. Before Brexit, EU citizens would only ever have been in danger of losing their EU citizenship if their national citizenship of an EU member state was withdrawn. This only relates to people who are not EU citizens by birth and have either gained their citizenship through fraud or are jeopardising it because they committed a crime.

There have been efforts to bring the issue of the loss of UK-EU citizenry to the attention of the European court before but they have failed. These cases have mostly based their argument on what is called the fundamental status of EU citizenship. This is the idea that EU citizenship is a right that cannot be arbitrarily withdrawn. This is something the European Court introduced and then developed in its past decision making ever since the case of a French student who fought to be given access to government benefits in Belgium. In this case the Court introduced the idea that “union citizenship is destined to be the fundamental status of nationals of the member states, enabling those who find themselves in the same situation to enjoy the same treatment in law irrespective of their nationality, subject to such exceptions as are expressly provided for”.

In the context of Brexit, the argument is that British EU citizens have done nothing to warrant losing their rights, even if the UK is leaving the union. No one has successfully argued this case in court, however. Cases need to be brought to the European court by domestic courts, which hear cases and then forward questions to the EU level where needed. Claimants have never convinced a national court questions in their case should be sent to the EU judicator – until now.

In this French case, a UK citizen residing in France argues she should not have been struck off the electoral roll for the French municipal elections held in March 2020. Voting and standing in regional and communal elections are rights inherent to EU citizenship. The French court is therefore asking the European court, among other things, to clarify whether the Brexit withdrawal agreement, together with Article 50 has to be understood to result in the loss of EU citizenship for all former British EU citizens. 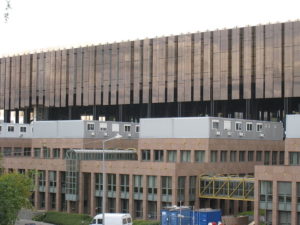 European Court of Justice / This file is licensed under the Creative Commons Attribution 2.0 Generic

The reference to the European court also includes a question on the status of EU citizenship for a specific group of UK citizens – those who have made use of their right to free movement before the end of the Brexit transition period and have been settled in an EU member state for over 15 years. The timeframe is important, as it is after 15 years that UK citizens lose their right to vote in UK elections.. If, as in this French case, these citizens are now losing their voting rights in their host country, they become politically disenfranchised.

EU citizenship : It’s not the end. It’s not even the beginning of the end, but, it may be the end of the beginning! https://t.co/LcvgTbCVSM

The outcome will be particularly interesting for the estimated 1.3 million UK citizens living in the EU. Many will hope that Brexit does not have to mean an end to their rights.

The case argues that UK citizens who have settled in an EU member state had the legitimate expectation that they would be able to stay there indefinitely. They legitimately assumed when they decided to emigrate from the UK that the rights they had when they first settled would continue to exist.

In the best-case scenario, the CJEU will provide a clear answer to the question regarding the loss of EU citizenship for UK residents abroad with a resounding “no”.

But short of that, even just some clarification about what will and won’t happen to these people after Brexit would be welcome. A positive decision by this court would clarify their status, provide them with secure residency, equal treatment and political rights, that would otherwise depend on the state they chose as their new home.

It could be years before the CJEU reaches a decision on this case, so it’s important for UK citizens living in the EU to get their hopes up. At the same time, they are living without any legal certainty at all. The Brexit withdrawal agreement signed by the UK and EU says that member states need to ensure any UK citizens living in their territory can register for a new right to remain. But in most cases, this new status does not compare to the fundamental status of EU citizenship. The rights it confers are minimal and do not automatically include access to healthcare. It’s up to each member state to decide what they want to offer, under which conditions and for how long.

That’s why it’s worth keeping an eye on this case as it travels to the CJEU. It could offer far greater legal certainty for UK nationals affected by Brexit.