If the plan works, at least 1,600 children in need of protection can be offered a new life. EU Commissioner Ylva Johansson has called on all EU countries to join the plan and assume their responsibilities. Eleven EU countries have made those commitments. Finland is prepared to receive 100 children. Portugal recently promised to receive as many as 500.

But Sweden is not among them. The government has so far refused to accept any of the children. The government would certainly agree that no child should be left without care in a refugee camp. But this has been the case for many years, when hundreds of children who have left their home countries because of violence, armed conflict, discrimination and poverty have had to try to survive in inhumane conditions on the Greek islands.

Hundreds of unaccompanied children are trapped on the islands. A small fraction are in so-called safe areas, crammed into portable containers that often lack locks, much less decent living conditions. But the vast majority are trapped in inhumane and degrading living conditions in informal settlement areas extending far beyond the perimeter of official facilities in the camps. Many sleep rough, sometimes in the open. They struggle to access education, food, water, toilets, and showers. Among them are children who suffer from complex and chronic medical conditions that they cannot receive treatment for on the islands. They are vulnerable and at heightened risk of Covid-19 infection.

Their fate is the result of a collective failure to address the situation of asylum seekers and migrants trapped on the Greek islands since 2016. EU member states need to agree on a permanent and long-term sustainable system for asylum seekers to move to other EU countries, and this is urgent. Until such a system is in place, temporary, urgent efforts are needed to save unaccompanied children, many desperately in need of medical care and a healthy living situation, from the terrible conditions in which they now live. 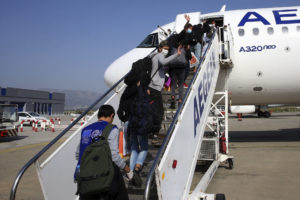 Unaccompanied children refugees from the overcrowded migrant camps on the north Aegean Sea islands, Greece, board a plane at the Eleftherios Venizelos International Airport in Athens to travel to Luxembourg, on Wednesday, April 15, 2020. Orestis Panagiotou/AP

Accepting responsibility for a modest number of these desperate children after years of humanitarian disaster in the islands not only shows solidarity with Greece and other EU countries, it also ensures that the children are provided the protection they are entitled to. If each EU country pledged to take care of a few dozen children, it would mean a significant change for most unaccompanied children trapped on the islands. Several other countries have shown that this is politically and legally possible. Sweden should too.

Finally, it is about safeguarding the fundamental rights of children, enshrined in international agreements such as the UN Convention on the Rights of the Child and the EU Charter of Rights. Among other things, children have the right to the highest attainable standard of health, as well as the protection and care needed for their welfare — rights that are violated every day in the camps.

In all measures concerning children, the best interests of the child must be put first. The situation on the islands is the result of a common failure at EU level, so member countries need to take a shared responsibility and ensure that children’s rights come first.

Sweden should choose the right path and join the countries that have promised to welcome children from the camps in Greece.