THE DOOMSDAY CLOCK
(Courtesy of The Globe and Mail) 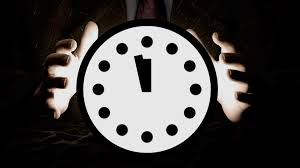 Never before this year 2020 has the world-famous Doomsday Clock registered only “100 seconds-to-midnight.” According to the Science & Security Board, Bulletin of the Atomic Scientists, since WWII, the world has never been so perilous.

Alas, it’s been a long journey (73 yrs) all the way up to 100 seconds to midnight versus the original 1947 setting of seven minutes to midnight. The safest setting was at 17 minutes to midnight in 1991 at the end of the Cold War. The wonderfully famous iconic clock is located in the lobby of the Bulletin offices at the University of Chicago.

Unceremoniously, recklessly the Trump administration carries the indisputable title as one of the most dangerous executives in the history of the country with two key issues that determine the clock’s settings: (1) climate change deniers and (2) atomic bomb explosion enthusiasts for simplicity of political gain, nothing else.

The Doomsday Clock is set by a board of scientists and professionals with depth of knowledge about nuclear technology and climate science. They are established professionals that often provide expert advice to governments and international agencies. Impressively, the Bulletins’ Board of Sponsors includes 13 Nobel Laureates.

The Doomsday Clock is internationally recognized as an important SOS of impending catastrophe. University of Chicago scientists that developed the first atomic weapons in the Manhattan Project founded the concept back in 1945. Thereafter, the Bulletin of the Atomic Scientists created the Doomsday Clock two years later.

Accordingly, as of June 2020: “In the view of many, the Trump administration’s proposal to expand spending on nuclear weapons is a sad and dangerous illustration of wildly misplaced federal spending priorities. As it proposed a 19 percent increase for nuclear weapons next year, the White House initially planned to slash the budgets for the Centers for Disease Control by 19 percent and the National Institutes of Health by 7 percent. The Pentagon’s proposal to cut the budget for the Cooperative Threat Reduction program in order to fund weapons modernization amid a global pandemic is shockingly reckless.” (Source: Kingston Reif, Debating US Nuclear Spending in the Age of the Coronavirus, Bulletin of the Atomic Scientists, June 10, 2020.)

In an incredibly mind-boggling act of near lunacy, senior White House officials have discussed conducting the first U.S. nuclear weapon test explosion since 1992, as a multi-billion dollar chest-thumping gesture aimed at Russia and China.

Several organizations have sent letters to Congress demanding prevention of funding for such boldfaced recklessness, and as a consequence, the likely start of a new nuclear arms race.

Eighty members of Congress have called on Trump to drop the insanity of renewed atomic bomb testing, calling it an “awful” and “dangerously provocative” proposal that would likely re-ignite a new nuclear arms race.

According to former Ambassador Thomas Graham, Jr., who led the successful US effort to indefinitely extend the Nuclear Non-Proliferation Treaty, such tests would “undermine 50 years of foundational global agreement that has curbed the spread of nuclear weapons under the Nuclear Non-Proliferation Treaty.” (Source: The Trump Administration’s Nuclear Test Delusions, Just Security, June 10, 2020)

Additionally, Sara Z. Kutchesfahani of the Bulletin of Atomic Scientists said: “A U.S. resumption of nuclear tests would send a bad signal to other countries and prompt them to test and create their own nuclear weapons. Moreover, innocent bystanders could be exposed to the radioactive fallout from a nuclear explosion. Tens of thousands of people have been afflicted by leukemia, thyroid cancer, miscarriages, and severe birth defects as a result of past nuclear testing in the United States alone.” (Source: Andrea Germanos, staff writer, 80 Lawmakers Demand Trump Ditch Any Thought of Resuming ‘Dangerously Provocative’ Nuclear Tests, Limitless Life, June 14, 2020)

Radioactive isotopes kill and/or maim protoplasm, i.e., living cells in people. A relatively new study by Keith A. Meyers, Danish Institute for Advanced Study, traced the effects of US radiation from 1951 to 1963 from above-ground atomic tests in Nevada. Meyers utilized National Cancer Institute records of Iodine 131, a dangerous isotope released in the Nevada tests, found in county-level mortality records, thereby discovering the gruesome fact that US nuclear testing killed hundreds of thousands of people, previously not accounted for. After all, nuclear emissions or radioactive isotopes drift in the atmosphere or otherwise lodge in soil and water, ending up in udders of cows that produce milk, amongst other horrors and misdeeds committed by radioactive isotopes.

As it happened, development of atomic bombs by the US carelessly created a weapon against its own people. This gruesome fact has largely been ignored by politics of all persuasions, but it’s a crime against humanity. Isn’t it?

For example, US atomic bombs dropped on Hiroshima and Nagasaki killed 250,000 people in the immediate aftermath. Whereas, Meyers’ research found the hidden human costs in developing nuclear weapons to be much, much, much larger than ever realized with radioactive fallout responsible for 340,000 to 690,00 American deaths from 1951 to 1973. (Source: US Nuclear Tests Killed Far More Civilians Than We Knew, Quartz, Quarterly Sector Update, December 21, 2017) That’s roughly equivalent to one-half of America’s WWII deaths.

Yet, there remains a missing component to the fallout of radioactivity, as nobody has measured the number of cases of chronic illnesses attributable to America’s nuclear testing in the barren desert. Alas, it is likely impossible to do so. Nevertheless, something anomalous in the environment, maybe radioactive isotopes and/or toxic chemicals in soil and water, or both, are responsible for an outbreak of 150,000,000 cases of chronic illness in the United States (RAND Corporation 2017 study) for example Alzheimer’s, Parkinson’s, arthritis, asthma, cancer, cystic fibrosis, COPD, Crohn’s disease, heart disease, epilepsy, bipolar disorder, multiple sclerosis, and diabetes. Only a toxic environment can be responsible for such large-scale chronic illnesses of nearly 50% of an entire population!

America’s unique experience of radioactive isotopes (the Nevada test site conducted 1,021 nuclear explosions from 1951-1992) combined with thousands of chemicals exposed to the environment since 1950 are likely responsible for a major chunk of America’s sickness epidemic of chronic diseases numbering 150,000,000, and still counting.

On August 5, 1963, President Kennedy, along with the United Kingdom and the Soviet Union, signed the Nuclear Test Ban Treaty, allowing the Doomsday Clock advisory committee to take a deep breath, Whew!

The Doomsday Clock was designed to warn the public about how close we are to destroying our world with dangerous technologies of our own making. The final 100 seconds doesn’t leave much room for error.

Robert Hunziker
MA, economic history DePaul University, awarded membership in Pi Gamma Mu International Academic Honor Society in Social Sciences is a freelance writer and environmental journalist who has over 200 articles published, including several translated into foreign languages, appearing in over 50 journals, magazines, and sites worldwide. He has been interviewed on numerous FM radio programs, as well as television.