For the first time since the beginning of the pandemic, anti-fascist groups linked to organized soccer fans in Brazil took to the streets to demand that President Jair Bolsonaro step down from office, and fight against demonstrations organized by far right supporters, who are attacking the Legislative and Judiciary Power.

In São Paulo, as soccer fan supporters held a pro-democracy demonstration on Avenida Paulista, in the central region of the capital, this Sunday (31), and were repressed by the Military Police. During the demonstration, military policemen started a confrontation against the protesters with moral effect bombs and tear gas.

Pro-Bolsonaro demonstrations against the measures of social isolation decreed by the state governor, Joao Doria, had been occupying Avenida Paulista every Sunday, week after week, without any repression by the Military Police, despite their breach of the state decree prohibiting large gatherings.

The outrage over these acts led soccer fans with historic rivalries to put together a unified act to prevent the Bolsonarist demonstration from taking place.

Meanwhile, in Rio de Janeiro, a protest was held against the black population genocide during police operations in the favelas during the covid-19 pandemic.

During the demonstration, protesters exhibited signs saying “Vidas Negras Importam”, a translation to Brazilian Portuguese of Black Lives Matter, the US campaign. 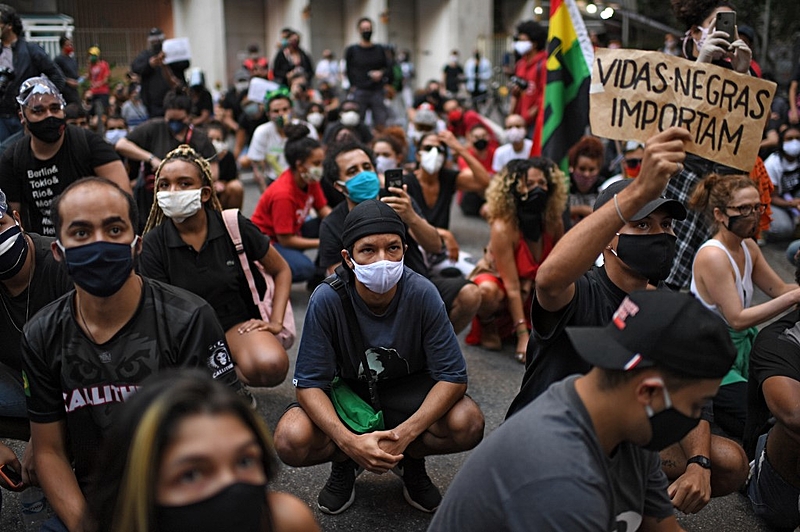 Also in Rio de Janeiro, Flamengo fans also performed a pro-democracy act. There was confrontation between participants and Bolsonaro’s supporters in the both southeastern states in the country.

In São Paulo, two women supporting Jair Bolsonaro walked into the crowd of organized supporters and were vocal against the act. One of them carried a hand weapon. Members of the organized soccer fans reacted to these gestures, and at that moment, the police took the initiative to suppress the act.

Questioned by Brasil de Fato on what led to the tear gas bombs being thrown at protesters by the police, the Secretariat of Public Security responded that “during the demonstration, there was a generalized fight and the Military Police was unable to curb the conflict between both groups”.

Jair Bolsonaro once again honored anti-democratic demonstrations in Brasília. This time, he ordered an official helicopter to fly over the Ministries Esplanade. Then, the Brazilian president greeted protesters, without wearing a mask, as required by the district government to combat covid-19, and rode a horse near the protesters. At the time, banners against the Supreme Federal Court (STF by its Brazilian Portuguese Acronym) and the National Congress were being displayed.

On Twitter, Bolsonaro published a print of a message from Donald Trump, president of the United States, in which the American says he will classify “Antifa” as a terrorist organization. Antifa is short for anti fascist. The term refers to groups that struggle against fascism in the world. Trump faces, after the killing of George Floyd by military police officers, a series of protests against racism and genocide among the black population in the US.

São Paulo remains the state with the most infections, with 109,698 cases. Governor João Doria (PSDB) announced a plan to reopen economic activities starting this Monday (1st). The measure of relaxing social isolation goes against the guidelines of health professionals, who worry about the continued growth in the number of covid-19 cases not only in São Paulo, but in the country as a whole.