The US campaign to award the 2021 Nobel Peace Prize to the Henry Reeve International Medical Brigade will be launched this June 16th, 2020. The campaign has been endorsed by prominent intellectuals, artists, politicians and ordinary citizens from around the world who recognize the outstanding contribution of the Brigade to human health and life. It will be announced during a June 16 webinar with Danny Glover and Cuban Ambassador Jose Cabañas about Cuba and Covid-19.

The Henry Reeve International Medical Brigade honors a US soldier who fought for Cuba during its First War of Independence (1868-1878). The Brigade was formed in 2005 when doctors were desperately needed in Louisiana following Hurricane Katrina. Unfortunately, the Bush administration refused the gesture of solidarity, and the Brigade was instead sent to respond to natural disasters in Guatemala and Pakistan. In 2005, the first group of professionals consisted of 1,500 doctors and medical personnel. In its almost 15 years of history, more than 7,000 health professionals have been part of the Brigade.

The Brigade has received numerous international awards, including the prestigious “Dr Lee Jong-wook Memorial Prize for Public Health” from the World Health Organization (WHO) in 2017.

First proposed by European groups, the campaign has spread globally. Renowned writer and linguist Noam Chomsky said that “Cuba is the only country to have shown genuine internationalism during this coronavirus crisis.”

“I was moved to tears by the sight of the Cubans, at the height of the pandemic, heading off to the most infected part of Italy to help save lives,” said Medea Benjamin, co-director of the peace group CODEPINK who co-chairs the U.S. committee that supports the campaign, along with Alicia Jrapko of the International Committee for Peace, Justice and Dignity. “The heroic effort of the Cuban doctors in this pandemic is not just the medical expertise they are bringing to many parts of the world but also their great solidarity and love for humanity,” Jrapko pointed out.

The campaign will continue to build broad and diverse support among all sectors of society and to encourage more media attention to the Cuban medical program, including lifting up the voices of the doctors who volunteer for these missions and the patients they treat.

The campaign’s Mission Statement summarizes the spirit of this global effort: “We hope Cuba’s example will inspire those of us in other countries to promote policies and actions that are more compassionate and generous in not only combating pandemics but building a more just, peaceful and verdant world.” 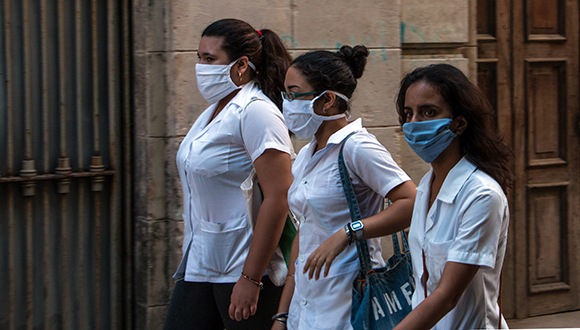 U.S. Campaign co-chairs and other endorsers are available for interviews.