United Nations has designated at least 170 specific days of the year as occasions to mark particular events or topics to promote the objectives of the Organization. 2 This might be considered as yet another sign of a supersaturation caused by the internet revolution. However, it cannot be denied that certain issues need to be globally recognized and amended. UNESCO has declared that the 3rd of May will be a day to remind us that media are in several parts of the world under attack, their independence are denied, critical thinking is considered as a threat and journalists seeking the truth are harassed, threatened, roughed up, or even killed. I would like to add that it is also an opportunity to acknowledge that communication, critical thinking, and imagination are essential parts of human existence and culture, if this is suppressed the entire humanity will suffer.

Journalists are essential contributors to the well-being of our communities. They are communicators and we currently live within an Age of Information, which we definitely entered in the late 20th Century when our civilization underwent a shift from traditional industry to an economy primarily based upon information technology. Even if the transformation has been brusque, its is nevertheless a result of a development which finds its origin more than 500 years back in time. 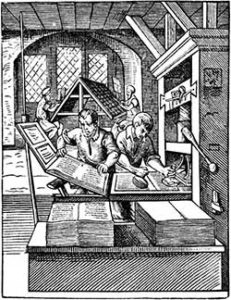 During the 1450s, Johannes Gutenberg devised a method for printing books with movable, reusable types. In three years he completed an edition of nearly 200 bibles, the same amount of time it previously had taken to print a single book of the same size as Gutenberg´s Bible. Soon there were printing presses in all of Europe’s major cities. The printed book became the most useful, versatile and most enduring technology in world history.

For the first time in human existence written texts reached large segments of the population, giving rise to ideas that turned the world upside down. Everything changed and time could not be reversed. Old regimes crumbled and disappeared, science advanced, people exchanged information across borders, across seas and continents. The world opened up, new technologies developed, people demanded rights and justice, supported by the rapid spread of the written world. Priviliged decision makers tried to stop this development; wars were waged, heretics tortured and excecuted, printing presses smashed, newspaper offices burned to the ground, but the unchained word continued to expand, sowing its seeds of transformation. People came to realize that freedom of the press was the linchpin for a just and equal society. In 1823, the German author Heinrich Heine famously wrote “Where they have burned books, they will end in burning human beings.” 3

What happened in the 16th century may be compared to the recent decades’ electronic information explosion, with its avalanche of social media, which just like the invention of printing with movable types is a result of technological innovation. The Canadian philosopher Marshall McLuhan called the global era of the printed book the Gutenberg Galaxy. However, already in 1962 McLuhan saw where humanity was heading, that the time of the Gutenberg Galaxy had begun to be replaced by computer technology: “Instead of tending towards a vast Alexandrinian library the world has become a computer, an electronic brain, exactly as an infantile piece of science fiction. And as our senses have gone outside us, Big Brother goes inside. So, unless aware of this dynamic, we shall at once move into a phase of panic terrors, exactly befitting a small world of tribal drums, total interdependence, and superimposed co-existence.” 4

The advent of the Internet and related social changes has during recent years affected the entire political discourse, making mis-information and deception more prevalent than ever before. Our political culture is increasingly framed by emotional appeals, neglecting and even resisting factual, complicated and multidimensional realities. Influential media outlets depend on their ability to attract viewers to their websites, so they thus might generate lucrative advertising revenues. With the sole purpose of attracting users and advertisers, startling and/or apealling stories are published without any foundations whatsoever. Easy access to online advertisment, increased political polarization and the enormous popularity of social media have all been implicated in the spread of ”fake news”, competing with well researched, responsable, and legitimate journalism. Commercialization of reporting has been an issue ever since the invention of the printing press. In 2014, the German journalist Udo Ulfkotte paid attention to the problem in his book Gekaufte Journalisten, in which he stated that secret services pay journalists to report stories in a certain light, something which also is true when it comes to politicians and decision makers in several nations around the world. 5

Fake news and an unrestrained internet are currently undermining serious media coverage, making it increasingly difficult for serious journalists to cover significant news – newspapers are shut down, journalists lose their jobs and income while reporting become ever more superficial and sensational. Parallell to this development, decision makers are incresingly trying to benefit from the marginalization of critical, professional and investigative journalism. Some, most notably the current president of the United States, have broadened the meaning of ”fake news” to include any reporting negative of their behaviour and leadership.

Totalitarian leadership tries to bask in on notions about the press spreading ”fake news”, i.e. criticism of its politics and is trying to control all media outlets, even appropriating as much reporting as possible. In its annual global survey, the Committee to Protect Journalists (CPJ) found that in 2019 at least 250 journalists had been imprisioned in relation to their work. After China, Turkey, Saudi Arabia, and Egypt, the worst jailers were Eritrea, Vietnam, and Iran. There has in recent years been a rising trend to harass and imprison regime critical journalists, while using numerous pretexts to silence the free press, depicting censorship and concerns of holding on to power as an antidote to terrorism and social unrest. Turkey, China and Egypt accounted for more than half of all journalists jailed globally. 6

Chinese leaders were utterly displeased to learn that their nation by Reporters sans frontières (RSF) had been evaluated as a nation that did not favour any freedom of expression. China was actually at the 177th place out of 180 countries within RSF´s 2020 World Press Freedom Index, barley ahead of Eritrea, Turkmenistan and North Korea. China´s deplorable position was according to RSF due to the fact that its leadership to a high degree was ignoring Article 35 of their nation´s own consitution, which intended to guarantee freedom of the press. I was also pointed out that President Xi Jinping and the Chinese Communist Party in recent years had tightened their control of China’s state and privately-owned media, increased surveillance of social media, and were actively trying to export their oppressive model of media control. It was furthermore stressed that in 2020, China remains ”the worlds biggest jailer of journalists” with more than 109 of them officially behind bars. 7 It is interesting to note that the Chinese Foreign Minstry spokesman, Geng Shuang, accused RSF of spreading ”fake news”.

Egypt´s low ranking in the 2020 World Press Freedom Index is due to the fact that over the past six years, Egyptian media have come to be almost entirely dominated by the State – including its intelligence services and security agencies. The Egyptian state is now in direct or indirect control of most of the newspapers, television and radio stations and can thus directly, or indirectly, censor all reporting. It has furthermore become dangerous to ”provoke” the regime. Not only journalists, but any media producer, run the risk of being put on trial for diffuse crimes, like insulting the judiciary and/or the president. When asked if the wievs of a world leader like Donald Trump had any influence on the freedom of the press in Egypt a journalist answered: ”It sets a tone. I would say it must matter on some level that the president of the United States expresses admiration for repressive governments that crack down on journalists and violate human rights.” 8

President Trump has called Egypt´s leader Abdel Fatah al-Sisis a ”great leader” and even my ”favorite dictator”. Much like Donald Trump and his supporters, Egypt’s leaders have responded to reports about the estimated number of coronavirus infections as though they were a personal attack, rather than a health crisis the entire world is struggling to contain. Opinions mirrored by another regime finding itself among the culprits when it comes to limiting freedom of speech – the Turkish president Recep Erdoğan, who has described journalists as ”throwing up” false information and untruths and thus being more dangerous than the virus itself. He accused media critical of his regime as ”waging a war against their own country” and working ”night and day to break the nation’s morale,” warning them that they would ”drown in their own pools of hatred and intrigues along with terrorist organisations.” 9

Freedom of speech is part of human culture, a tool to confront power abuse, corruption, injustice and violence. To preserve and defend human dignity and well-being we must protect the freedom of the press, if not – the people of the world will follow a road to self-extinction.

Jan Lundius holds a PhD. on History of Religion from Lund University and has served as a development expert, researcher and advisor at SIDA, UNESCO, FAO and other international organisations.