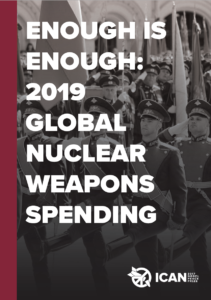 In our research, we also found that the nine nuclear-armed states spent an estimated $14 billion more on their arsenals in 2019 than they did in 2018. And nuclear expenditures are projected to grow substantially in the next decade as these countries continue to develop and build new nuclear weapons systems. Read and share “Enough is Enough: Global Nuclear Weapons spending in 2020 →

So how do we stop these countries from wasting billions of dollars while putting the entire world at risk? With our findings, citizens in nuclear-armed states can take their governments to task for choosing to put these weapons of mass destruction over healthcare, education or combating climate change. You can help us spread the word by reading and sharing the report→

These citizens can encourage their countries to join the rest of the world. In 2017, the majority of the world’s countries rallied behind the UN Treaty on the Prohibition of Nuclear Weapons, sending a clear signal to the nine nuclear-armed-states (and to the banks, universities and other institutions tied to nuclear weapons production) that nuclear weapons are unacceptable and will soon become illegal under international law. With 36 states parties, the treaty is very close to entry into force. It’s time for all countries to show their support for a nuclear-weapons-free-world by joining the treaty. And we will keep pushing until they do.

International Campaign to Abolish Nuclear Weapons
The International Campaign to Abolish Nuclear Weapons (ICAN) is a global campaign coalition working to mobilize people in all countries to inspire, persuade and pressure their governments to initiate negotiations for a treaty banning nuclear weapons. It has 500 partner organizations in 103 countries, and was launched in 2007. www.icanw.org