“Hispanics, who make up 29% of New York’s population, account for 34% of deaths from COVID-19; likewise the black community accounts for 28% of deaths despite representing 22% of the population. This is a clear sign of economic disparity and lack of access to health in a community that has serious chronic health problems and overcrowding,” said Oxiris Barbot. Head of the New York City Health Department.

I am frightened by these numbers. I’m a migrant, part of the working masses in the restaurant line, getting up early at 4:30 AM. I had been doing this economic activity since I arrived in New York and of course, nothing related to the profession of Social Communicator, which I studied in Ecuador.

This has been the activity that allowed me to subsist, until the second week of March, when the Covid-19 pandemic arrived and expanded in the city, forcing the Mayor of New York, Bill de Blasio, to declare a State of Sanitary Emergency. Restaurants, casinos, hotels and bars were ordered to closed and English classes were suspended to prevent the spread of the virus through human contact, leaving only the services of ordering and home delivery. Restaurants reduced their staff by 98% and a large number of them chose to close down.

In fact, in the second week of March, the place where I worked reduced by half its operations and, being located in the Times Square area, the absence of tourists was evident due, among other things, to the ban on flights from Europe adopted by President Donald Trump.  Fear was latent among my colleagues, with concern on their faces.

Two days later, we were notified that the restaurant was being closed. 400 workers of the company, we were left out in the open. Ninety-five percent of them are African-American and Hispanic immigrants with the only option of applying for unemployment insurance and sick days.

Without a job and confined to the room I rent in Corona in the middle of the Coronavirus pandemic — how ironic — I see how the economy is collapsing and uncertainty takes over all the neighbors, mostly Ecuadorians and Colombians. 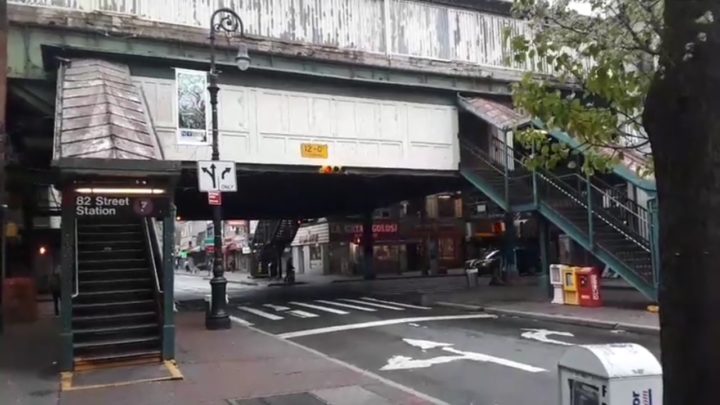 While one of the migrant families contracted the virus, no one knew how to deal with it in the first place. The Elmhurst hospital, located in the area, was collapsing due to the massive arrival of people infected with Covid-19, and the lack of equipment, supplies and medical personnel to counteract the pandemic

Friends, neighbors, family and colleagues contracted the virus, and many unfortunately did not resist and we no longer counted on them; others were admitted until they were stabilized and discharged because the hospital could not keep them there. Some decided not to go to the hospital, and turn to traditional natural medicine because the hospital did not give them immediate attention and they were suspicious of the medical service that could not even test their blood to determine if they were infected.

There are many sick people without family, without food and isolated. Others have lost their loved ones and many are still unidentified in hospital morgues. Families need to pay the funeral expenses, and at least the cremation. But these are very expensive, with the lowest prices reaching $1,700. This is a heartbreaking and cruel human drama for the soul. The mass graves that are being dug are a mirror of social indifference to immigrants, “the others,” “the nobodies,” “the invisible,” “the undocumented,” “the wetbacks,” “those who crossed borders.

Added to this, the immediate concern is how to deal with the economic impact with millions of unemployed among whom I am.  The undocumented immigrant working class, without any economic shelter from the government, continues to pay rent. No law has been adopted to alleviate these payments. There is a proposal to freeze rents for 90 days that has not yet been passed. The only thing that has been approved is a moratorium on evictions, which means that for 90 days the landlord cannot carry out evictions. But after the 90 days, what happens? Most likely many will lose their places to live.

I invite mutual solidarity, and to raise the spirits with a phone call. I also invite you to participate in the census because it is the only weapon we have to assert ourselves in a system that places a higher value on the big corporations of Wall Street and a president who only looks at his re-election without caring about the health of the American people, and less about his immigrants.