It was a protest unlike any of the others Concerned Citizens of St. John has held over the five years they’ve been advocating for the Denka/Dupont neoprene plant to curtail its emissions of chloroprene. Held on Saturday morning in an empty parking lot outside the closed St. John Parish government center, three dozen masked, gloved and socially distancing CCSJ members and allies from ten other advocacy groups took a serious risk during the COVID-19 pandemic to make equally serious demands that prioritize solving life and death needs over corporate profiteering. Primarily, they want chloroprene emissions curtailed to EPA safe levels or the neoprene plant shut down to give people in St. John a fighting chance to stave off the worst effects of COVID-19.

“We all know that Denka/Dupont, with its chloroprene that they’re putting on us, has compromised our systems,” said CCJS’ Robert Taylor, 79, who called the emergency protest less than 24 hours before it began. “That is the reason we are dying at such unholy numbers. Every week we’re losing people, people I’ve known all my life. We can’t even comfort their families.”

Already at the highest risk in the nation for cancer from chloroprene, the parish ranks among the nation’s top ten counties with the highest COVID-19 death rates. The numbers are stark: 38 St. John the Baptist residents are dead from the virus, including both parents of a prominent pastor. Participants at the emergency protest tallied their almost surreal losses.

“It’s like I’m in a Twilight Zone and I keep waking up” said Tish Taylor, Robert’s 56 year-old-daughter, “and it’s just getting worse. This moment is a devastating moment, but it gives us the opportunity to make the world understand that we are at war every day of our lives, that we are being poisoned every day of our lives, and we have no control over it. We have to get the emissions down to the 0.2 EPA safe standard, not 50 times that. We want them to comply.”

“We’re seeing a disproportionate number of Black Americans dying in this pandemic,” said George Handy, a member of CCJS and the NAACP, who has lived in the parish for 46 years and personally knows 10 of those who’ve perished from coronavirus. “Our people are dropping like flies. It has been a very trifling situation around here. I feel hurt and let down by the government; it’s the greed and the power structure that locates these petrochemical plants where mostly Black people live in the first place.”

On Good Friday, Louisiana Governor John Bel Edwards​ ​announced​ the formation of a new Health Equity Task Force to study the state’s statistics: 70 percent of those who’ve died from the virus in Louisiana are African American, which he admits is “deeply disturbing.” No one from CCSJ was contacted or consulted about the task force, even after five years of highly vocal advocacy that has garnered national and international press. 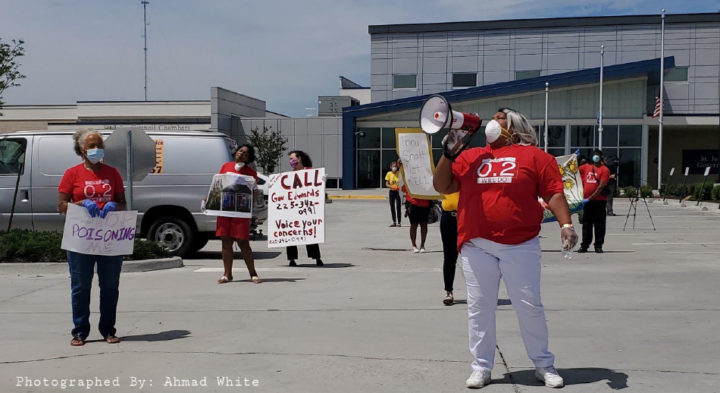 “I’m totally suspect of any good samaritan coming to help us, but don’t even see us, don’t talk to us,” Robert Taylor said. “We’re not visible to them. I challenge their sincerity.”

“That’s nice, but he doesn’t need a task force,” Tish Taylor said echoing her father’s sentiment. “The governor knows what to do. And I guarantee you, we’ll invite them here, and they won’t come. They’ll blow us off. When you tell us it’s underlying causes and we know here what causes the underlying causes is chloroprene in the emissions, I don’t know what else you need to study or have a group find out. The information is out there, it’s documented.”

Yesterday, CCJS signed onto an open letter from the Coalition Against Death Alley, to U.S. Representative Cedric Richmond (printed below but ​embargoed​ until Tuesday, April 14, 10:00 am CST) ) that provides references and links to that documentation. As explained in the letter, CADA felt compelled to take this action because at an April 1 Coronavirus Teleforum in which Richmond answered constituent questions about the federal response to the crisis, four submitted questions about the virus’ correlation with industrial pollution were not asked or answered. From the letter:

“The only question concerning air pollution that you did address was from a caller who asked if it was safe for his son, who has asthma, to play in the yard given their family lives close to a large industrial plant. We were surprised by your resounding yes given the known link between asthma and air pollution exposures.”

Some of the speakers at the emergency protest called the killing of Black people in Death Alley, now compounded by COVID-19, a genocide, defined in Article II of The United Nations Conventions as:

“It feels like a plague,” said Larry Sorapuru, a former parish councilman and CCSJ member whose relatives—a cousin and his wife—are both on ventilators. “Right now we’re burying people, people are dying, the virus is here. Until we get Denka shut down, this community’s going to be on pins and needles. 250 jobs (most don’t live in the parish) versus the lives of over 40,000 people—the math doesn’t work. Nobody’s going to want to reinvest money to stay here for the long haul.”

One of the unknowns in organizing the emergency protest was what the local government’s response might be. “It has not always been favorable,” Robert Taylor said, adding that he’s starting to get offers of support from some parish elected officials.

“This is some reality changing stuff here,” he said. “It’s so lopsided I don’t see how anybody with any sense of normal decency could not say wait a minute, let’s give these people as much protection as possible. At least let’s not bombard them at this moment with anything else while they’re under attack from this pandemic.” 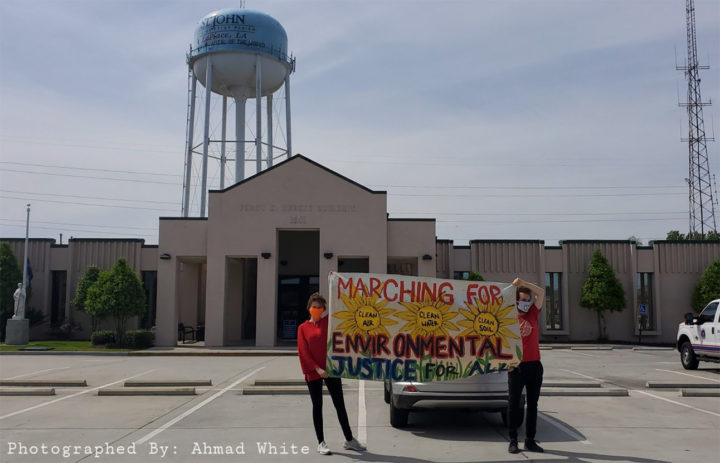 Signatories are still coming on

Thank you for organizing the Coronavirus Tele-forum on 4/1/20 focusing on St. John the Baptist Parish, which currently has the highest death rate from COVID-19 in the nation. Residents of St. John the Baptist Parish have also been identified by EPA as having the highest cancer risk in the country due to industrial toxic air emissions.​ ​The purpose of this letter is to 1) draw your attention to the growing body of scientific research identifying air pollution as a significant COVID-19 risk factor, and 2) respectfully request an additional opportunity to discuss the related questions submitted during the Tele-forum, which were not addressed.

Results of multiple studies have linked exposure to air pollution to higher death rates from outbreaks of coronavirus. Authors of a newly published nationwide study conducted by Harvard University T.H. Chan School of Public Health reported patients in areas with higher levels of fine particulate matter (PM 2.5) air pollution were more likely to die from COVID-19 compared to patients in areas with cleaner air. Specifically, a small increase of only 1 u/m3 in PM 2.5 is associated with a 15% increase in the COVID-19 death rate, which is 20 times higher than observed for PM2.5 and mortality from all causes. Previous research investigating the 2003 SARS outbreak (another type of coronavirus) in China found patients living in areas with moderate levels of air pollution were 84% more likely to die compared to those living in areas with cleaner air.

Race is reportedly linked to excess COVID-19 deaths and exposures to toxic levels of air pollution and related health impacts. In multiple U.S. cities including Chicago, Philadelphia, and Detroit, African Americans are reported to be dying of COVID-19 at much higher rates than Whites. Currently in Louisiana, 70% of residents dying from COVID-19 are African American, while Louisiana’s population is only 33% African American.​ ​Researchers investigating environmental inequalities across the U.S. reported African Americans are consistently exposed to higher concentrations of industrial toxic air pollution compared to Whites. Within Louisiana, cancer risks from toxic air pollution in majority Black industrial corridor neighborhoods are 16% higher than risks in majority white neighborhoods. Relatedly, 10 of 13 Louisiana Parishes included in the 50 U.S. counties with the highest COVID 19 death rates (as of 4/7/20), lie along the Mississippi River industrial corridor where African American communities are disproportionately exposed to industrial pollution.

In addition to race, underlying medical conditions including asthma, chronic lung disease, and serious heart conditions are identified by CDC as COVID-19 risk factors. According to the World Health Organization, fine particulate matter and other ambient air pollution causes or contributes to all of the CDC-identified underlying medical conditions. Available data suggests residents of St. John and other Cancer Alley river parishes suffer disproportionately from these conditions. According to the East Jefferson General Hospital’s 2015 Community Health Needs Assessment, rates of asthma among youths living in neighborhoods within St. John and St. Charles parishes are more than twice the national, state, and other service area parish rates. Asthma hospitalizations among children in St. John Parish are significantly higher than rates in other service areas and more than twice the national and state rates. St. John residents also have higher rates of deaths from heart disease, stroke, and cancer compared to national, state, and other service area rates. Attachment 1 includes graphs depicting each of these indicators abstracted from East Jefferson General Hospital Community Health Needs Assessment.

We know of at least four participants of your Tele-forum who submitted questions about exposure to toxic air emissions and high death rate from COVID-19 in St. John and other industrial corridor parishes that were not addressed.

Barbara Washington submitted the following question: “Will the emissions from the chemical plants have an effect on people infected with the corona virus?”

Reverend Gregory T. Manning asked if you would be willing to call for a shutdown of facilities like Denka, which are producing synthetic rubber used for wetsuits, a non-essential item. He also tied the associated pollutants with an increased COVID-19 death rate.

Peter Digre asked what you were going to do about the Denka plant and other polluters as a part of a COVID-19 strategy since chemical and air pollution weaken the respiratory, immune and cardiac systems and thereby make people both more susceptible and more likely to die from COVID-19.

The only question concerning air pollution that you did address was from a caller who asked if it was safe for his son, who has asthma, to play in the yard given their family lives close to a large industrial plant. We were surprised by your resounding yes given the known link between asthma and air pollution exposures.

We are residents of Cancer Alley which we have renamed Death Alley to reflect the high burden of air pollution-related diseases including asthma, cancer, cardiovascular disease, and most recently, disproportionately high death rates from a respiratory virus.

Congressman Richmond, we are kindly asking you to meet with us for a (virtual) town hall to discuss essential actions that you can take or support, which will help protect high-risk communities in Louisiana and reduce the disparities in COVID-19 deaths:

In light of the looming climate crisis, we are asking you to support the long-term goal to phase out fossil fuel over the next decade and support a just transition to renewable energy, healthy and safe jobs, and a sustainable economy.

The mission of Concerned Citizens of St. John is to raise awareness about the high levels of chloroprene in the atmosphere surrounding the Denka/Dupont facility, as well as other issues that have or may result from exposure. We are a private, non-profit organization dedicated to finding solutions to this potential health hazard. https://www.facebook.com/groups/1633932826913757/