The 17 goals agreed by the global community to reduce poverty and create a sustainable planet are the responsibility of all people, wherever they are in the world, according to the United Nations. The Sustainable Development Goals or SDGs represent a boundary-pushing blueprint for the future of the Earth and it’s anticipated they will be realized by 2030. UN News joined the International Labour Organization on a visit to Hawaii where many people are already living aspects of the goals in their everyday work.

Mike Demotta is the Curator of Living Collections at Hawaii’s National Tropical Botanical Garden on the island of Kauai. He is passionate about his speciality, native plants and the important role they play in Hawaiian culture. Ahead of the International Day of Forests, marked annually on 21 March he explained to UN News why saving biodiversity on the Pacific island archipelago is so crucial.

“The majority of the plants that are grown here are native Hawaiian plants and many are federally listed as rare and endangered. One plant that the garden has been working with over decades is called alula in Hawaiian. It’s generally found or was found mostly on the cliffs around the island of Kauai. 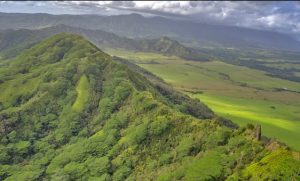 Many native plant species are under threat in the forests of the Hawaiian island of Kauai., by ILO Photo/John Isaac

It looks almost cactus-like, with a very thick stem which is quite bulbous at the base. It produces fibrous roots which are able to penetrate fine cracks and hold itself to steep rocks; it has large flat rounded green leaves and looks almost like a cabbage. I love this plant because it has adapted to live and thrive in the harshest of environments that the islands can throw at it.

However, this plant is under threat due to habitat degradation, loss of pollinators and invasive species, like non-native grasses that choke out seedlings and goats which were brought here in the early 1800s and which eat them.
The last time a survey was done, by helicopter, just one alula plant was found in the wild which was growing out of a cave overlooking the ocean. So, it’s the last Lone Ranger.

We think the alula was pollinated by what is probably now an extinct moth species that had a particularly long proboscis allowing it to feed off the nectar and carry pollen from plant to plant.

Today, if we really want to produce seeds from these plants, we have to hand pollinate and that’s what we do here. Ideally, we work with other conservation organizations to replant native species in the wild as resources become available.

‘Inseparable bond’ between plant and culture

I’m interested in native plants like alula because of the inseparable bond between these plants and early Hawaiian culture.

Our poetry and music use plants as metaphors in storytelling. From a practical perspective, I really feel responsible for doing whatever I can to conserve and perpetuate native plants because they are an important part of the ecosystem.

Plants never seem to be the first thing folks think about; they see an albatross soaring in the sky and or the rare Hawaiian monk seal. Those are charismatic animals which everybody wants to save. However, they probably would not be able to exist if the plants in the ground did not contribute to the ecosystem.

For example, these plants will help to strain rainwater that goes into the ocean eventually as clean water instead of sediment. So, you have to educate people and show them why it’s so important to love plants.

The early Polynesians discovered and colonized these islands over many generations, and they understood the importance of conserving the islands’ ecosystems, as without those ecosystems, they would not be able to survive. Nature was part of their ancient religion and so plants were representations of certain gods or deities which they cared for; this was an innate part of the Hawaiian belief system.

Climate change and the collapse of forest systems

Today, without these plants, we would probably not be able to live here for very long.  If there are too many invasive species, and if our forest systems collapse entirely, the islands could not hold any rainwater: our water supplies would literally evaporate and these islands would become uninhabitable.

Climate change is also a factor in our forest ecosystems. One of the things that we will sadly not see in our lifetimes at this elevation are our native forest songbirds, which are now very rare. We call them the honeycreepers and they’re pretty much all evolved to feed on the nectar of our native plants. They’re only found at the highest elevations now because their native ecosystem lower down has been destroyed.

The other problem is mosquitoes which are not native to Hawaii. They carry avian malaria which none of our native birds have resistance to. The climate has warmed up, so there are mosquitoes at the summits of mountains, the last sanctuary of these native birds. Unless something is done to control mosquitoes, we can foresee the loss of our native honeycreepers in the next couple of decades.

If birds and native insects start to disappear because of climate change, then we will lose pollinators. Plants will no longer produce viable seeds, and that will unleash a domino effect, which will impact biodiversity.

I am still optimistic though; there is no reason why we shouldn’t be growing and replanting these rare plants in the forest. I’m confident that there’s enough resilience for most of the species to survive, and I will not give up my fight to save them.

'Plants are manifestations of Hawaiian gods'. Mike Demotta, curator at @NTBG in Kauai, explains why plants are so important to the culture of the Hawaiian islands. Read more in our First Person story: https://t.co/2e0hp7Eppb pic.twitter.com/823cqrx0Oo