‘Shusenjo’ focuses on the competing historical narratives about the issue

A project by a graduate student intended to explore the issue of sex slavery organized by Japanese forces in Second World War has resulted in a documentary popular in Japan and beyond — and has also ignited a lawsuit, plus ongoing harassment by the Japanese government.

“‘Shusenjo’: The Main Battlefield of the Comfort Women Issue” is a 2018 documentary film by Miki Dezaki. I spoke with him during the film’s exhibition at the Victoria International Film Festival (VIFF) in Canada, on February 15, 2020.

“My film is a reflection of how the ‘comfort women’ issue is being discussed now,” says Dezaki. “I wanted to find out why there are so many people who have devoted so much time and resources towards erasing this issue.”

Approximately 200,000 women from more than ten occupied countries in Asia were conscripted or forced into sexual slavery by the Imperial Japanese Army. These women were euphemistically called “ianfu” (comfort women) by Japanese military authorities. Since the end of the Second World War, the issue has long been a source of political controversy.

“The ‘comfort women’ issue has been the source of the so-called ‘history wars‘ – mainly between  South Korea and China – since the 1990s,” says Sujin Lee, an Assistant Professor in the Department of Pacific and Asian Studies at the University of Victoria, which helped sponsor the “Shusenjo” premiere in Canada, also interviewed by Global Voices at VIFF.

“‘Shusenjo’ […] meticulously documents opposing viewpoints about the history of ‘comfort women’ without making any judgments or taking one side,” says Lee.

Dezaki, a native of the state of Florida in the United States, originally traveled to Japan as part of the government-sponsored Japan Exchange and Teaching (JET) Programme, where university graduates from around the world are placed in schools to teach English.

While participating in the JET Programme, Dezaki launched a YouTube channel under the handle Medama Sensei which in part focused on social issues in Japan. After a two-part video exploration on racism in Japan became a viral hit, Dezaki’s videos attracted unwanted attention from the Japanese far-right. 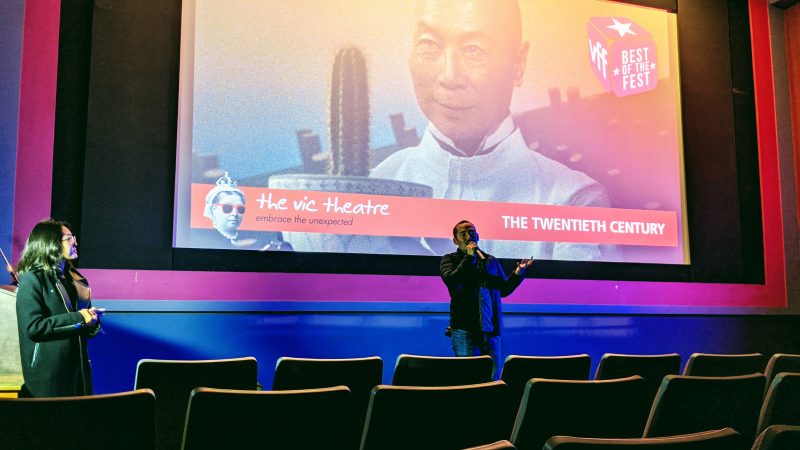 “Shusenjo” director Miki Dezaki answers audience questions following the screening of his documentary at the Victoria International Film Festival on February 15, 2020. Sujin Lee of the University of Victoria stands at left. Photo by Nevin Thompson, CC-BY 3.0

“Internet right-wingers were bashing and threatening me online,” Dezaki says. “They were even calling up my school.”

After leaving Japan, Dezaki spent a year as a monk in a Thai monastery and then returned to Florida to care for a sick parent. Later on, Dezaki returned to Japan, this time as a student in the Graduate Program in Global Studies at Sophia University in Tokyo.

Having honed his video production skills on YouTube, Dezaki decided to create a documentary about the “comfort women” issue as his graduate project.

“How Japanese people and Korean people perceive the issue are very different,” says Dezaki. “I thought that if I made a film that gave more context to the issue it would help the people in both countries stop hating each other.”

“Shusenjo” focuses on the competing historical narratives about the “comfort women” issue, and actually includes very limited testimony from the women themselves.

Instead, Dezaki’s documentary features a surprisingly comprehensive list of interviewees for a graduate school project, including human rights activists and serious historians working in Japan and in South Korea.

“Shusenjo” then juxtaposes this factual commentary with arguments made by a who’s who of prominent and notorious historical “revisionists” who typically deny the Japanese military ever forced women into sexual slavery during the Second World War.

“Korean audiences are fatigued from hearing about the ‘comfort women’, and Japanese audiences don’t actually believe the testimony of the women in the first place,” says Dezaki.

The star-studded rogues gallery of notable so-called revisionists in the documentary include author Kase Hideaki, journalist Sakurai Yoshiko, and Kent Gilbert, a media personality originally made famous in Japan for being able to competently speak Japanese on television but who is now better known as a booster for the country’s far-right.

“I would go to their symposiums or speeches, go up to them, introduce myself as a graduate student, and ask them if they would like to appear in my documentary,” Dezaki says. “They usually agreed.”

By juxtaposing the revisionists, who often appear to be repeating the same talking points, with serious historians and activists who provide nuance and context about the issue, “Shusenjo” makes for a compelling documentary.

“This approach helps the audience understand what is at stake in the ‘comfort women’ debates and carefully judge the issue on their own,” says Sujin Lee at the University of Victoria.

Once the documentary was released, however, some of the revisionists were unhappy with the conclusion of the film and claimed they didn’t know it was going to be a commercialized film, says Dezaki.

“Their opinion is fully in the film,” says Dezaki. “It’s just juxtaposed with other opinions.”

Dezaki says he was always careful to ensure interviewees signed a release before including their remarks in the documentary, and even sent interview segments to interviewees in advance, without receiving a response in protest. Kent Gilbert, the television personality in Japan famous for his Japanese proficiency, claimed he couldn’t understand the release because it was written in Japanese.

“Well, he signed it anyway, […] and his release was actually written in English,” says Dezaki.

Eventually, five of the revisionist interviewees decided to sue Miki Dezaki and his distribution company in Japan. Dezaki says the lawsuit is essentially a “strategic lawsuit against public participation” (SLAPP), a type of lawsuit that is still permitted by Japan’s legal system

“(The plaintiffs) are saying that somehow I deceived them into signing the release, or that they didn’t understand the release form,” says Dezaki. “Their court arguments are very confusing and are clearly meant to waste my time. They have been asked by the court to clarify their claims three times already.”

The lawsuit has also been used to discourage distribution of Dezaki’s documentary. Because of the lawsuit, a film festival in Kawasaki nearly canceled a screening of “Shusenjo” until Hirokazu Kore’eda, a prominent Japanese director, intervened.

The Japanese government has also used the lawsuit to try to shut down screenings of the film around the world.

“Japanese consulates have pressured schools to stop showing my film,” Dezaki says, adding that Japanese consulates in Lyon, in France, Hamburg, in Germany, and in Los Angeles have approached venues to warn them about Dezaki’s documentary.

The ploy rarely works, Dezaki says, although in Japan such lawsuits have a chilling effect on freedom of speech.

“Getting sued is an unpleasant experience,” Dezaki says. “Nobody wants that to happen to them.”

Several of the interviewees are also trying to persuade Sophia University to revoke Dezaki’s graduate degree.

“They said they sent 490 information packets (complaining about the documentary) to every single professor at Sophia University,” Dezaki says.”They’ve actually had a press conference appealing to the Pope, who had come to Sophia University recently.”

In the absence of widespread distribution, to get his documentary in front of audiences and to generate ticket sales, Dezaki currently crisscrosses the globe, showing “Shusenjo” at film festivals. He is currently looking for a distributor in North America.

“‘Shusenjo’ is not anti-Japan,” says Dezaki. “Revisionists want to protect or restore Japan’s honour but instead are doing the exact opposite.”