It is assumed that Evo, like all asylum seekers, must restrict his actions within the regulatory framework of his new status. The former president of Bolivia, along with “thanking the people and the government for allowing us to be close to my beloved Bolivia,” stressed on this point that “I understand my responsibility as a refugee in Argentina and I will comply with what the regulations say,” adding that last Sunday he met with Alberto Fernández and Cristina Kirchner, who emphasized “some recommendations” to him. 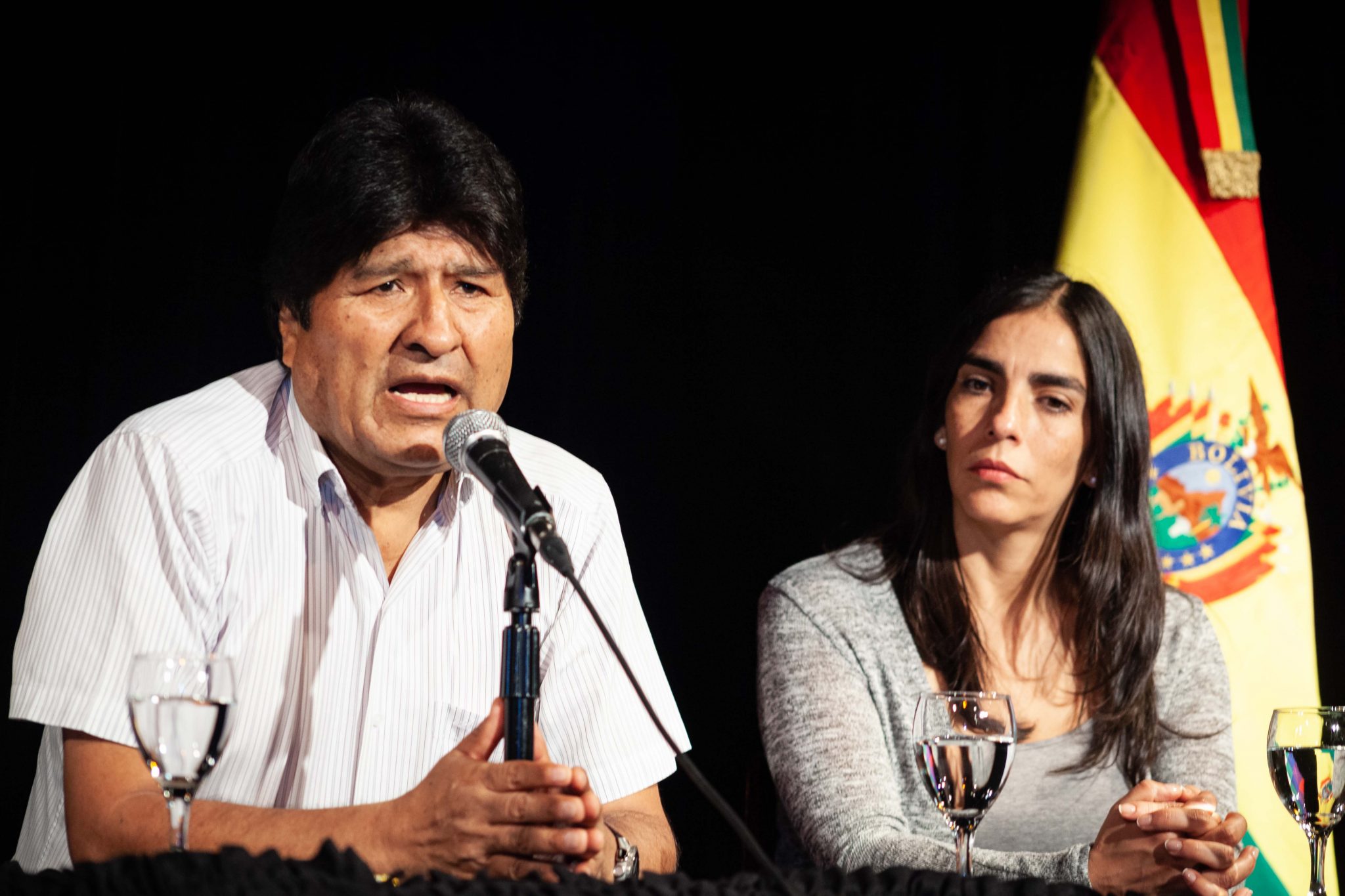 However, Evo Morales was categorical this Tuesday morning, December 17, at the Cultural Centre of Cooperation in Buenos Aires, when he warned that “the UN cannot be trusted,” that “another world is possible without the IMF,” and that the current Bolivian president, self-proclaimed as such after the coup d’état, Jeanine Áñez, is an “usurper”.

Evo made a part by part analysis of his country’s situation, and among his statements he regretted having given more power to the Armed Forces. In that line, he also said that “unfortunately neither the intelligence of the Police nor the Armed Forces warned us that the coup was coming. A woman called me to warn me about the meetings that were held before the coup d’état, and that would happen after the elections”.

Amidst smiling and ironic gestures that expressed an “is the last straw,” Evo Morales said that the prosperous economy that Bolivia has shown in recent years is beginning to go to the trash bin as the new dictatorship is contracting unnecessary debts and selling out to the logic of capital.

In a determined way, the former president, proudly an Indigenous person, questioned “how long are they going to govern us from above and from outside? We are not a colony to decide the president from above or from outside,” framing the fact that he was always the target of the empire’s attack because he was not a lackey president of the empire.

Evo insisted that they won “in the first round constitutionally,” accusing that “for the OAS, winning by more than 70% is fraud. The OAS is a coup plotter. 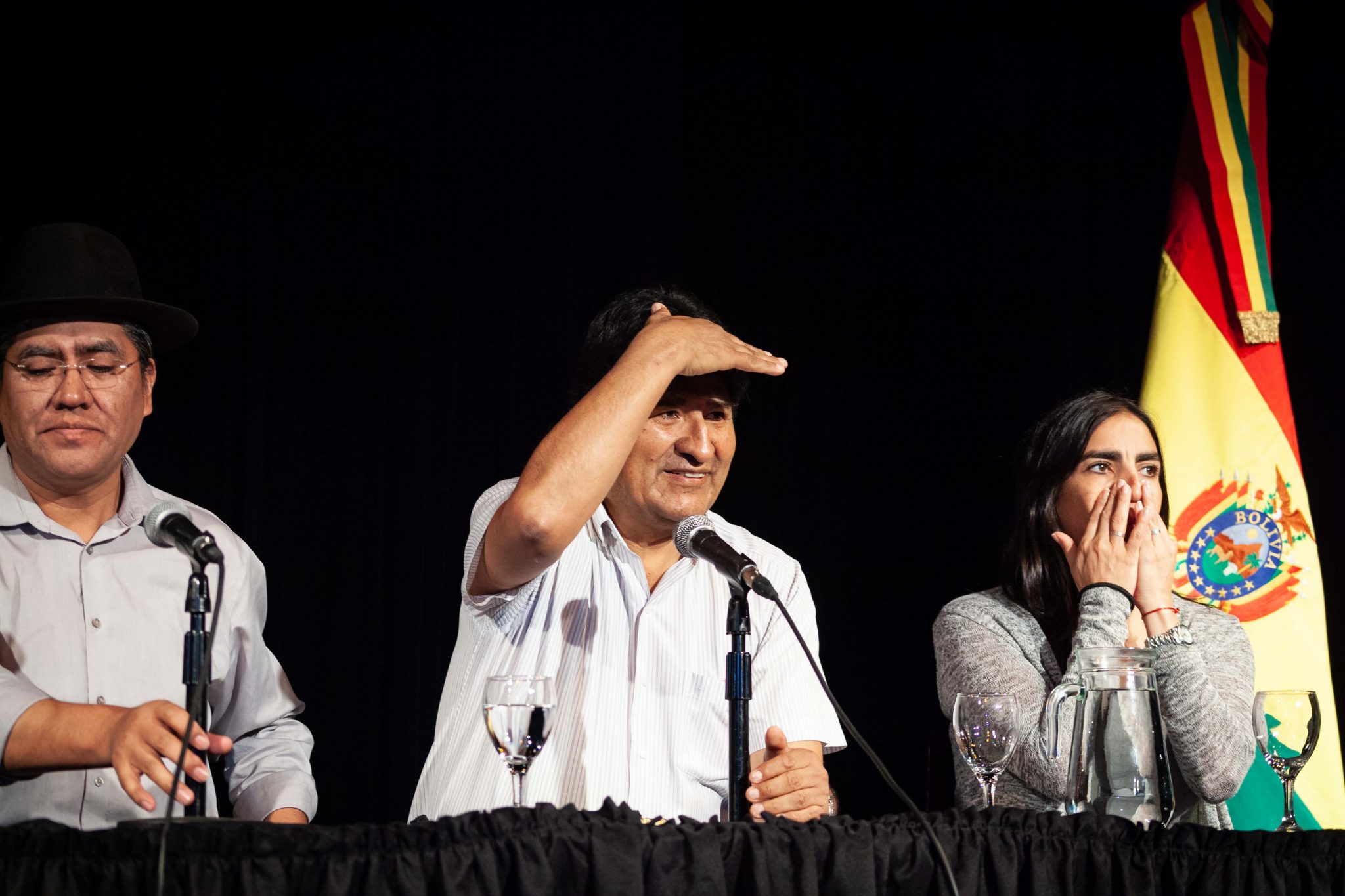 Alarmed by the escalation of human rights violations in Bolivia since the coup d’état, and together with painfully denouncing the deaths by gunfire and the persecution of his people to the point of breaking into tears in the middle of the interview, Evo spoke of peace for Bolivia and assured that this will not be possible “if there is no social justice” nor is it guaranteed “with military controls”.

“I am convinced that the right to life is more important than any right, we have endured so much. In our administration there were no deaths by bullet, today there are 36,” lamented Morales. In this context, he stressed that he became president “with the union struggle, thinking about the country and not about money,” clarifying that “I am not an enemy of the rich, I am a friend of the poor.”

The leader, who was accompanied by his former chancellor and was encouraged, applauded and reinforced with cheers by some members of the press in the moments in which he related dramatic passages of this process that has him in exile today, affirmed that “I overcame all the trauma that we have faced and while I have life I will do politics.”

“If they propose free elections that end political persecution and let me enter Bolivia, I have the right to do politics,” he emphasized. However, along with assuring that he will not be a “candidate” in the next Bolivian elections, Evo Morales says he is “convinced that we are going to win the national elections again and we are going to recover the power of the indigenous peoples in Bolivia democratically,” emphasizing that what he hopes is that “there will be free, healthy and transparent elections, but for that there cannot be political persecution or political detainees.”

When he left, which was quick after responding to only five previously agreed questions from the media, a group of people, Bolivians, journalists and passers-by, who were in favour of a free Bolivia, shouted and sang slogans, among which the most important was “La Whipala se respeta, carajo! (The Whipala [Pluirnational Bolivian flag] damn well deserves respect!)

The photos are by Paula Acunzo