“It is Orwellian for Congress to hand over billions of dollars worth of weapons and bombs to a president waging a horrific, unconstitutional war in Yemen—and call that progressive.”

“Every member of Congress who voted to give the most corrupt, unhinged, and unstable president in history $738 billion to fight endless wars…must never tell us that we cannot afford Medicare for All or a Green New Deal.”
—Warren Gunnels, Sanders senior adviser

Just 48 members of the House, including 41 Democrats, voted against the 2020 National Defense Authorization Act (NDAA), which increases the Pentagon budget by $22 billion. The final vote was 377-48.

“This NDAA is atrocious, and it’s very depressing that only 48 members of congress voted against it,” tweeted anti-war group CodePink.

In a floor speech ahead of Wednesday’s vote, Rep. Ro Khanna (D-Calif.), the most vocal opponent of the NDAA in the House, said “there are many things you can call the bill, but it’s Orwellian to call it progressive.” Khanna was standing across the aisle from Rep. Adam Smith (D-Wash.), who hailed the measure as “the most progressive defense bill we have passed in decades.” 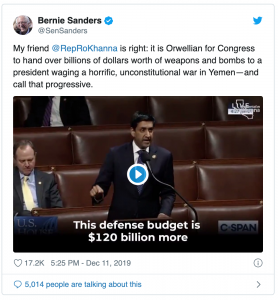 According to the New York Times, Smith—chairman of the House Armed Services Committee—negotiated several provisions of the NDAA directly with Jared Kushner, Trump’s son-in-law and senior adviser.

“It was Mr. Kushner who helped broker a deal to create the Space Force, a chief priority of the president’s, in exchange for the paid parental leave [for federal employees],” the Times reported Wednesday. “It was also Mr. Kushner who intervened on measures targeting Saudi Arabia that would have prohibited arms sales or military assistance to the Saudi-led intervention in Yemen. He said they were nonstarters for the White House.” 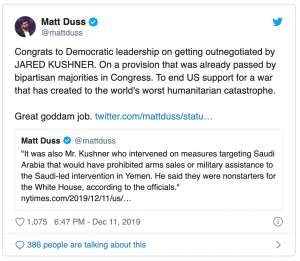 Rep. Barbara Lee (D-Calif.), who voted against the NDAA, noted in a statement that the final version also stripped out her House-passed amendment that would have repealed the 2002 Iraq Authorization for Use of Military Force (AUMF).

“With the release of the Afghanistan Papers, it is especially imperative that we take a hard look at our military spending and authorizations,” said Lee, the only member of Congress to vote against the war in Afghanistan in 2001. “I can tell you: it is an appalling, but not shocking read for those of us who have been working to stop endless war. It’s past time to end the longest war in United States history, withdraw our troops, and bring our servicemembers home.”

The 2020 NDAA now heads to the Republican-controlled Senate, where it is expected to pass. In a tweet ahead of the House vote on Wednesday, Trump praised the bill and said he would sign it into law “immediately.”

“New rule: Every member of Congress who voted to give the most corrupt, unhinged, and unstable president in history $738 billion to fight endless wars, fund a bogus space force, and put our troops at risk must never tell us that we cannot afford Medicare for All or a Green New Deal,” Warren Gunnels, Sanders’ senior adviser, tweeted Wednesday night. “Ever.”