On Tuesday October 29, the House passed a resolution acknowledging the Armenian Genocide of 1915. Many Armenian Americans celebrated, but I didn’t. Don’t get me wrong – as the granddaughter of a genocide survivor, I know how little has been done to atone for this crime against humanity. It’s just that Armenian Americans have been working for decades to pass such measures, while the U.S. has largely refused for fear of upsetting Turkey, a key NATO ally in the Middle East. For the House to pass a resolution now when it is politically expedient, as retaliation against Turkey, makes me once again feel like a historical pawn. The timing weakens the resolution’s meaning and dishonors the memory of the survivors and martyrs like my grandmother.

For those unfamiliar with the history: In 1915, Armenians were victims of a brutal attack on their existence and culture, commonly known as the Armenian genocide, in which an estimated 1.5 million Armenians were killed by the hands of the Ottoman Empire. As  Armenians, then second class citizens living on their ancestral homeland, were increasingly agitating for equal rights and greater self determination, the Ottomans felt threatened, first waging pogroms that killed hundreds of thousands of Armenians in 1895, and again as the Empire was losing land and shifting to the Republic of Turkey. Under the cover of World War I, they systematically exterminated Armenian citizens, first rounding up and killing the leaders of the Armenian community on April 24th, then either gathering men to dig their own graves before shooting them or forcing them to work in harsh labor battalions till they dropped to their deaths. Then they rounded up everyone else, the women, children, and elderly, and “deported” them to Syria. Armenian land, businesses, and belongings were usurped by Turkey, and this criminal act has never, to this day, been acknowledged by the Turkish government. In fact, it’s a crime to even speak it’s name in Turkey.

Many countries, including France, Germany, and Canada, forty-nine states, and the Pope have passed resolutions or made statements to condemn this history and call it what it is – genocide. If enough countries honor and acknowledge the suffering of the Armenians, then international peer pressure will force the Turkish government to fess up and atone for their crimes – at least, this has been the theory. The recognition of the U.S. to confirm this history has long been seen as the crest of the tidal wave of such pressure.

Unfortunately, the U.S. has disappointed us again and again with dribs and drabs. Every year for as long as I can remember in my adult life (at least for the nineteen years that Adam Schiff has been involved), Armenian lobbying groups have worked with members of Congress to introduce a resolution to acknowledge the genocide. Over the years, I have frequently called my representatives in Congress to ask them to support it. Every year it fares differently, depending on relations with Turkey, but never meeting expectations.

Why the reluctance to call out the truth? Turkey is a key ally to the U.S. with a military base from which missions in the Middle East are carried out. There’s always been a lot of tip-toeing around Turkey since they attempt to retaliate after genocide recognition – for example, when France passed their resolution, the Turks canceled a military contract. But now, after Trump sold out the Kurds to the Turks, a decision that nearly everyone in the U.S. Congress is against, the bill has passed by an enormous margin. Turkey has finally strayed so far from agreements with the U.S. that it is safe for the House to pass the bill, a card to play to strike back at President Recep Tayyip Erdoğan. How much more meaning would this resolution have if it had been passed on our commemoration day, April 24th? But in the U.S., justice is served when convenient.

I understand that the timing of the resolution could instead be seen as a positive act in solidarity with the Kurds. On Tuesday Congress also voted for a resolution to impose sanctions on Turkey, in an attempt to mitigate Trump’s disastrous decision to remove troops from the Syrian-Turkish border. Turkey is now doing to the Kurds what they did to the Armenians. As Kurds have long said, “the Turks had Armenians for breakfast. Now they are having the Kurds for lunch.” But I wonder how the resolution can delay the completion of the meal – and if the Turks will have the United States’ moral authority for dinner.

As a ten year old child, my grandmother lost her father when he was taken away by authorities, never to be seen again; then she survived a deportation march of hundreds of miles through the desert to Syria while witnessing her mother, grandmother and sister die along the way. Personally, watching Turkey invade northern Syria to attack Kurdish civilians has been triggering to say the least.  To see the Kurds betrayed by the U.S. withdrawal, after all they have sacrificed, it’s hard to understand how a resolution will support them. Why aren’t we concerned if the bill will bring Erdogan’s wrath? He has already dismissed the resolution for what it is – a political act. Bringing U.S. troops back to the area would be a solution to right our wrong. Otherwise, we will have to wait another 100 some odd years for the U.S. to apologize to the Kurds when it’s politically expedient.

Before the vote, Stephen Kurkjian and Samantha Power both wrote op-eds (in The Boston Globe and The New York Times, respectively) suggesting the resolution be supported by Trump. How does a president who institutes a Muslim ban, insists on a border wall, and fills concentration camps on the border with children separated from their families have any authority to recognize the Armenian genocide?

There are better ways to to honor and acknowledge history. Armenian Americans and all Americans should do all they can to stand by the Kurds, to give humanitarian aid, to call our representatives to reverse the pullout of U.S. troops. In order to maintain their moral authority, the U.S. Congress should pass human rights resolutions because they are the right thing to do, not just when it’s politically convenient. 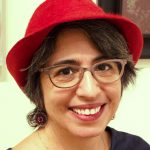 Nancy Agabian is a writer, teacher, and literary organizer. She is the author of Princess Freak, a collection of poems, and Me as her again, a memoir of her Armenian American family history. Her novel manuscript, The Fear of Large and Small Nations, was a finalist for the Pen Bellwether Prize for Socially Engaged Fiction. She has taught creative writing at NYU and the New School.