Yesterday (23) the Chamber of Deputies of Chile held a special session with the presence of the Minister of Interior and Public Security, Andrés Chadwick, who presented a report on the measures taken by the government in response to the crisis situation in the country.

After the minister’s presentation, Tomás Hirsch (Humanist deputy of the Frente Amplio) was among those who responded. Counting on a brief time for his intervention, and before the evident disinterest of the official for what was said, in a moment of his intervention Hirsch demanded to the President of the session: “Will I be able to stop, President, while the minister entertains himself or are they entertaining him?

Indeed, as one who tries to get a distracted student to attend and understand what is being explained to him, Hirsch insisted on claims he had already made in previous sessions.

On October 20, faced with the announcement that the increase in transport fares was being cancelled, Tomás Hirsch said in the Chamber of Deputies:

“A week ago, President Piñera said that Chile was an oasis in Latin America. Yes, but curiously, it is the only oasis in the world full of military on the street. They don’t understand anything! This is not about the metro. This is about decades of abuse, of mistreatment… (…) There is a lot of accumulated anger and it will not be resolved by cancelling the rise of the metro…”.

The street mobilizations that continued to increase would prove him right.

In yesterday’s session, and faced with the announcement of other palliative measures by the government that the minister tried to justify, Hirsch insisted:

“…the country has been abused and mistreated for decades. And how does the government respond? First, without understanding anything -because we were in an oasis- and then with measures that today -faced with the current situation-, are crumbs. They are crumbs!

We have said “stop the AFP”. They didn’t want to listen because their pockets were getting bigger. We have told them to “stop with their health business, with the theft of water, with handing over the fish to the senator’s friends…”, and they have never wanted to listen. They didn’t want to listen. And here we have finally come to this situation in which a people wakes up, gets up and mobilizes.” 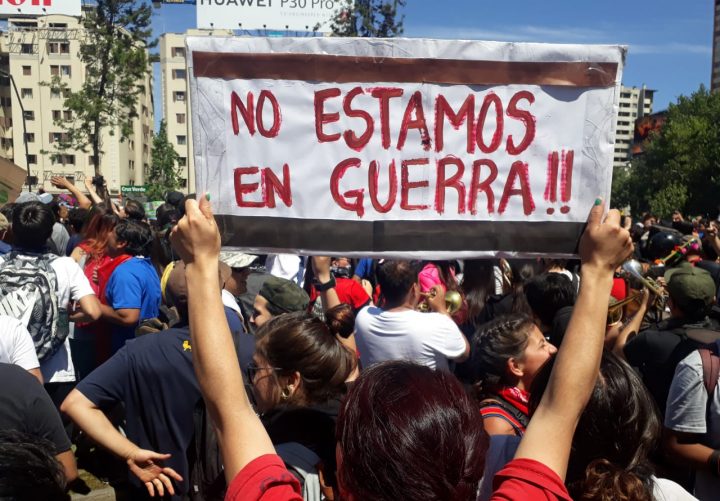 Photo by Sergio Bastías Picture translation “We are not at war”

How to deactivate violence

At the 20th session the Deputy Hirsch had said: Violence is the inequality that exists in Chile. (…) Do you want to deactivate the accumulated violence? Then you have to stop mistreating people, you have to stop abusing people. Do you want to deactivate violence? Then they should immediately present (…) a bill to lower the shameful salaries of parliamentarians and high authorities. Immediately present a serious bill to raise the basic pillar of solidarity. Present a bill to increase the minimum wage decently and to allow any family to overcome the poverty line.”

However, three days later, faced with a popular demand that continues to grow, in his presentation before the deputies the minister would say that “the actions of violence are concerted and seek to generate conditions of crisis in the functioning of the country. That is why Hirsch questioned him:

“And where have you looked? In those who are looting, and have taken the military to the streets and have put all their energy into the most brutal repression. I know you have it in your memory, well, it was part of the dictatorship! It seemed normal to you in those days as well… but today we are supposed to be in democracy! What you are doing is unthinkable cruelty. You are killing the people and you come here to give an explanation…! (…)

Look Minister: no social crisis, none in history, has been solved with tanks in the street. That doesn’t work. It is resolved with changes in line with the demands, not by taking the military out into the street. It is resolved with a new pact, with a new social pact. But what do we have today? Dead without a name, without a clear cause, without those responsible. Impossibility of supporting those who are being detained. Denunciations of the installation of torture centers in more than one metro station (there are videos, there are videos!).

Finally, and to the proposals for immediate actions, the deputy added that of a constitutional reform:

“Chile needs a new Constitution generated in democracy and today we call for us, once and for all, to move forward to give ourselves that new Constitution that will allow us to get out of this trap that has been going on for too long.