«On August 19, a civil coup d’état took place with the appointment of administrators in our municipalities. Sezai Temelli [pictured], co-chairman of the Halklarin Demokratik Partisi (HDP), the People’s Democratic Party, declared [1] after the decision of the Turkish Ministry of Interior to remove the elected mayors of the city of Van [2], Diyarbakir and Mardin, a place with a strong Kurdish presence administered precisely by the HDP.

Instead, as extraordinary commissioners, the provincial governors of the same city have been appointed. Exactly as happened, at the hands of the same government, in 2016 when 94 mayors were removed. The Ankara government would accuse the three mayors of having links with the Kurdistan Workers Party (PKK), a Kurdish paramilitary organisation declared “terrorist”.

The matter, to outside observers, may seem absurd if only reference is made to the extraordinary nature of the provision that does not follow any investigation or judicial procedure. But it is not something fallen from the sky!

Already on August 12, as soon as the Eid al-Adha (the “sacrificial feast”), an important Muslim feast, ended, Governor Mehmet Emin Bilmez had issued an ordinance [3] prohibiting, for fifteen days, in the province of Van, all kinds of processions, meetings, meetings and even the issuing of press releases. The obviously anti-freedom provision was justified with the aim of “guaranteeing national security, protecting public order”.

The same Turkish president, Recep Tayyip Erdogan, in a speech last February, announced the repetition of the 2016 provisions if, in March, mayors had been elected who in his opinion were “linked to terrorist organizations”.

Opposition: Take to the streets; police make hundreds of arrests

“We do not accept this attack against the will of the people,” Temelli said. The politician then announced that “we will be stubbornly on the streets every day.

In response to the sender that the government accuses, Temelli instead explicitly accused the government of corruption: “What they do to Diyarbakır, Van and Mardin is obvious. The theft is obvious. They draw resources from subcontractors. The political project of Halklarin Demokratik Partisi (HDP) – concluded the co-chairman of the party – is to seek democracy and “peace for the people of Turkey, for the Syrian people and for the Iraqi people”.

However, the police reacted to the protests in the squares with several operations that led hundreds of people to temporary detention. Among them, also numerous councillors and municipal advisors.

Faik Öztrak, vice-president and spokesman of the other opposition party, the historian and secular CHP, Cumhuriyet Halk Partisi, or the People’s Party of the Republic, spoke of a “coup d’état“. Öztrak has accused President Erdogan of violating “the boundaries between the party in power and the state” and of instrumentalising terrorism to violate the national will. 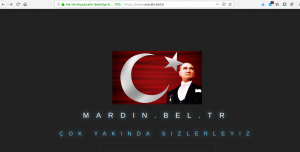 The three mayors had been elected, almost by plebiscite, on 31 March.

In Van, a city of 360 000 inhabitants in eastern Anatolia, Bedia Özgökçe Ertan was elected with 54% of the preferences.

However, in Mardin, a city of 87,000 inhabitants in southern Anatolia that dominates the Syrian border, Mayor Ahmet Türk had obtained 56%. Today little is known about what is happening in this area. The municipal website is “hidden” [4] .

Just north of the latter city is Diyarbakir, a city of 597,000 inhabitants, the so-called “capital of Kurdistan”. Here the mayor Adnan Selçuk Mızraklı was elected with 63% of the votes.

Pro-Erdogan parties stir up the threat of terrorism

“Democracy is not represented only by polls,” tried to explain [5] Mahir Ünal, vice president of Adalet ve Kalkınma Partisi, the Justice and Development Party (AKP) or President Erdogan’s party. Ünal reiterated the accusations, addressed to the removed mayors, about “helping and defending the terrorist organisation”. Position strongly supported [6] by Omer Celik, interior minister and spokesman of the AKP. Celik argued that, in the municipal commissions, the structures of the municipality were used to provide services to terrorists and persons associated with terrorism were employed in the institutions. “The fight against terrorism is the first condition for the defense of democracy,” he concluded.

The Milliyetçi Hareket Partisi (MHP), or the Nationalist Movement Party, an extremist nationalist political formation and Erdogan’s ally, issued a statement through Vice President Semih Yalcin. He assured [7] that the MHP “will continue to support the government’s just efforts in the fight against terrorism”. Accusing the HDP of being the “political wing of the PKK”. 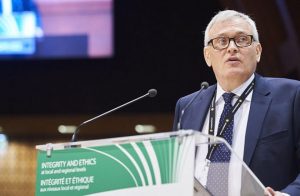 Anders Knape
Clearly aligned against the willingness of the government, albeit with the normal moderation that distinguishes political statements, the first international comments.

“Deep concern” about “practices that seriously undermine the implementation of local democracy,” expressed [9] Anders Knape, President of the Congress of Local and Regional Authorities of the European Union.

Maja Kocijancic, spokesperson for the EU’s foreign and security policy, stated [10] that the issue “raises serious concerns as it calls into question respect for the democratic results of the 31 March elections”.

Kati Piri, on behalf of the Group of Socialists and Social Democrats (S&D) in the European Parliament of which she is Vice-President, has asked [11] “the government to annul this unjust decision”.

For Erdogan, however, these statements are completely irrelevant.

Translation from Spanish by Pressenza London