With surging unemployment rates and high rents, Palestinian refugees who fled the Syrian war for Gaza are struggling to climb out of poverty. Like many Gazans, they hope to leave the strip in search of a better life.

In mid-2012, Egyptian police arrested Omar Odeh for violating the conditions of his residence permit and overstaying his visa. After realizing he was a Palestinian refugee from Syria, they deported him to Gaza. Today he is one of hundreds of Palestinian refugees from Syria who fled the civil war there only to find hardly-endurable living conditions in the strip.

Odeh, 63, is originally from the destroyed Palestinian village of Majdal, near present-day Ashkelon. Today he lives in Biet Lahia, a town in northern Gaza, with his family of six, who joined him after his deportation. Alongside a group of Palestinian refugees from Syria, he helped established the Follow-Up Committee for Palestinians from Syria in Gaza, which works with governmental and non-governmental organizations, the Palestinian Liberation Organization, and international groups to secure a dignified life for them in Gaza.

When Palestinian refugees from Syria began returning to Palestine, the Palestinian leaderships in the West Bank and Gaza promised to help them in their resettlement process. The Palestinian Authority and Hamas, however, have yet to deliver on their promises, said Odeh.

According to him, Hamas promised the refugees from Syria financial aid to help them secure shelter and jobs. But with surging unemployment and high rents, many are struggling to climb out of poverty.

Palestinian refugees in Syria knew that Gaza was under blockade by the Israeli army and that living conditions were challenging. They resettled in Gaza thinking they would be better integrated into Palestinian society than elsewhere.

“No one looks at us as refugees from Palestine,” said Odeh. “When we were in Syria, we worked in economics, sports and art, we were part of building Syria. Now, in Gaza, we are strangers. We can’t live a dignified life and we don’t feel we are in our home. All the Palestinian refugees from Syria are trying to leave Gaza and I am one of them, but they can’t.”

‘We saw death before our eyes’

According to the Euro-Mediterranean Human Rights Monitor, since the Syrian war erupted in March 2011, 160,000 Palestinian refugees fled the camps in Syria to neighboring or European countries. Around half of them were granted asylum in Europe. More than 57,000 resettled in Lebanon, Turkey and Jordan, and around 7,000 went to Gaza and Egypt.

Most Palestinian refugees from Syria arrived in Gaza between mid-2011 and 2013. At the time, the Rafah crossing between Gaza and Egypt was open regularly, and refugees could enter on a humanitarian basis without a visa or inspection.

When Amina Ahmed’s family reached Gaza, they only had $200. They escaped the Yarmouk refugee camp in Damascus in search of safety following the 2012 escalation in the Syrian war. They chose to go back home to Palestine where they had relatives, thinking that Gaza would be safer. Seven years later, they have a different idea of life in Gaza, and the five-member family now dreams of emigrating.

Ahmed’s father, Jamal, originally from Jaffa, fled to Gaza during the Nakba. After the 1967 war, Israel exiled him to Jordan for participating in the fighting. He later moved to the Yarmouk where he lived until his death in 2008.

When Ahmed returned to Gaza, she found severe poverty. There are no job opportunities for her or for her university-graduate children, Samir and Samar. “Most days, we’d have one meal,” she said. “We were horrified during the Israeli war on Gaza in 2014. We left our homes in al-Shuja’iyya neighborhood to [find shelter at] UNRWA schools. We saw death before our eyes.”

She tried to emigrate using international human rights organizations, but could not due to limited freedom of movement in Gaza and the fact that she doesn’t have a Palestinian identity card or passport. Israel’s control of the Palestinian Population Registry, compounded by the internal political divides between Hamas in Gaza and Fatah in the West Bank, has severely delayed the process of obtaining identification cards for Palestinians in the strip.

Seeking a way out

Mohammed Yousef, 30, spent six years in Gaza. After realizing it would be difficult to find opportunities there, he found a way to be smuggled out through Turkey then Greece, to Sweden. He filed for asylum, and in November 2018 became a permanent resident there.

Yousef said he didn’t feel safe in his own homeland. Originally from Haifa, he was raised on loving Palestine, but was shocked by the political split in the Palestinian government, and particularly among the factions in the Gaza Strip. He was terrified, he said, especially after the home his family rents in the west Gaza neighborhood of al-Naser was partially destroyed by Israel in the 2014 war. 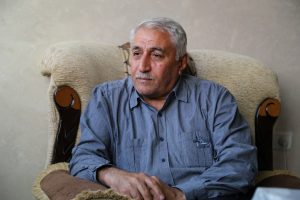 “The people of Gaza are kind but the politicians are not honest. There is no safety in Gaza, as Israel can bomb Gaza at any moment. Sweden is my homeland after the Arab regimes and Israel destroyed my home.”

Eyad Abo Hamad, 32, was jailed in Gaza four times for outstanding debts after borrowing money to purchase food for his family. He arrived to Brussels in February, where he got permanent residence after applying for asylum. He, too, said he doesn’t feel safe in Gaza or any Arab country.

“I have two grown-up kids in Gaza facing hunger,” said Abo Hamad, “besides, they are terrified by the sounds of bombs dropped by Israeli airplanes targeting Gaza.” Abo Hamad admits he was contemplating suicide during the 2014 war, when conditions were especially difficult, and safety was nowhere in sight. He, his wife, and their two daughters almost died while crossing the ocean through Turkey and Greece, “all for the sake of finding safety.”

According to Odeh, of the 360 refugee families that arrived in Gaza between 2011 and 2014, nearly 130 remain. All of them are poor, many residing in rental houses around the refugee camps, far away from the city center and the main roads where housing is more affordable. Some were jailed for accumulated debts and unpaid rent, added Odeh.

“We returned to Gaza as war refugees, not by a political agreement or our choice. We escaped into a region thinking that it’s safer while we witnessed two Israeli wars on Gaza, in 2012 and 2014,” said Atef el-Emawi, who heads the Follow-Up Committee for Palestinians from Syria in Gaza.

Amjad Yaghi is a journalist from Gaza.