While I write, the dramatic developments regarding the migrants that were rescued by Sea Watch and have been stuck in open see for almost two weeks have not yet reached a conclusion. Having followed this story with passion, I want to highlight a number of elements which go beyond the continually evolving news.

The criminalisation of solidarity towards migrants has been going on for more than two years – not only in Italy. After every new episode one has the impression of having touched rock bottom – and yet something else keeps happening which is even more unthinkable and horrifying. It is not just the facts – thousands of people tortured, raped and sold in Libya and those that manage to escape from that hell are left to drown in the Mediterranean, thousands more are amassed in refugee camps along the Balkan route, not to speak of those that perish attempting to cross the heavily militarised border between Mexico and the US. It is also the words that are used, the increasingly delirious, sexist, vulgar and violent speeches and the brazen, endless lies.

The far right politician Giorgia Meloni proposes to “sink” the Sea Watch, Salvini calls it a “pirate ship” and dismisses its captain, Carola Rakete, as a “bragger who plays politics with migrants’ lives” (and he isn’t?). He invokes the “sacred defence of the borders of the fatherland”, as if we were at war, declares that the situation is “busting his balls” and repeats obsessively his absurdities about NGOs being complicit with people traffickers. His bellicose proclamation that “they will never disembark” sounds more like the boast of a commander addressing his troupes than a realistic declaration (in the end the migrants always disembark, but after a cruel and useless wait).

The contrast couldn’t be bigger between the language unworthy of a minister (luckily, Meloni isn’t one) and the calm and courageous statements made by the captain of Sea Watch: where Salvini acts tough with the weak, saying he is ready to “mobilise the police” against vulnerable and exhausted people, Carola Rakete simply states that: “I know what I’m risking, but the 42 survivors are on their last legs. I’m taking them in”. The risk is big. Following the “security decree” that was recently passed by the Italian government, Sea Watch is threatened with a fine up to 50’000 euro, the requisition of the ship and charges for supporting illegal immigration. And yet, like all the Just ones starting from Antigone who over the course of history have chosen to disobey unjust laws, in her words one can hear the consistency of those who place the safety of other human beings above everything, even at great personal danger.

It is this which ultimately fuels hope: those who help and save migrants represent today the vanguard of a humanity that doesn’t want to surrender to this brutal situation. Many others are joining in what is still a minority – it’s true, no point denying it – but that won’t remain a minority for long. In this context, the purpose of “truth and justice” that animates activists, journalists and those like me who feel a bit of both is essential.

Drawing by Francesco Piobbichi, activist of Mediterranean Hope and member of the Forum Lampedusa Solidale. 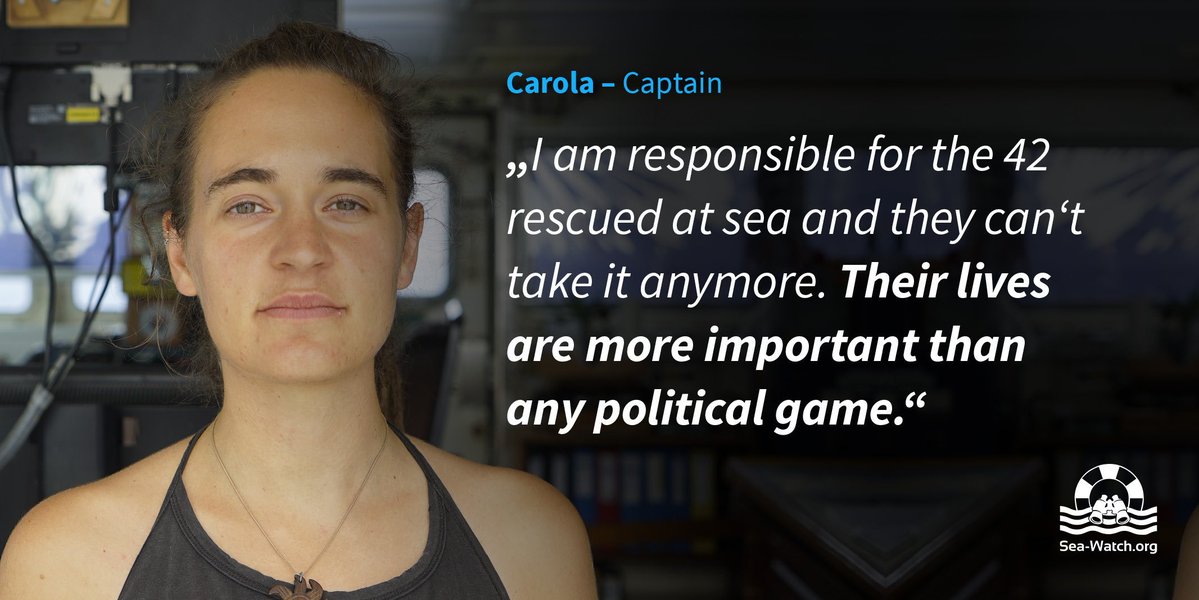