As the world keeps increasing its carbon emissions and exports,rising in 2018 to a record 33.1 billion ton per year, the atmospheric greenhouse gas level has now exceeded 560 ppm CO2–equivalent when methane and nitrous oxide are included, intersecting the stability threshold of the Greenland and Antarctic ice sheets. The term “climate change“ is no longer appropriate since, what is happening in the atmosphere-ocean system, accelerating over the last 70 years or so, is an abrupt calamity on a geological dimension, threatening nature and human civilization. Ignoring what the science says, the powers to be are presiding over the sixth mass extinction of species, including humans.

As conveyed by leading scientists: “Climate change is now reaching the end-game, where very soon humanity must choose between taking unprecedented action, or accepting that it has been left too late and bear the consequences”Prof. Hans Joachim Schellnhuber.“We’ve reached a point where we have a crisis, an emergency, but people don’t know that … There’s a big gap between what’s understood about global warming by the scientific community and what is known by the public and policymakers” Prof. James Hansen;

By May 2019 CO2 levels measured at Mouna Loa, Hawaii, reached 414.66 ppm, growing at a rate of 3.42 ppm/year, the highest rate recorded for the last 65 million years when the dinosaurs went extinct. The total CO2, methane (CH4) and Nitric oxide (N2O) expressed as CO2-equivalents has reached 56o.3 ppm(Table 1), the highest concentration since the Oligocene (33.9 to 23 Million years ago) when atmospheric CO2ranged between 400-500 ppm. 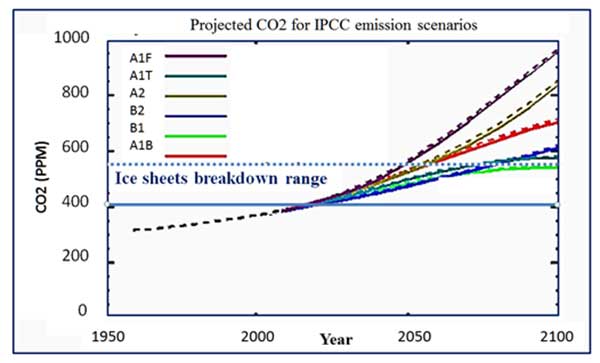 The current rise of total GHG to about 560 ppm CO2-equivalent implies that, for a climate sensitivity of 3 degrees Celsius per doubling of atmospheric CO2, global warming has potentially reached 3oC. This level is almost 3 times the 2018 global land-ocean temperature of 0.8oC above pre-industrial levels as reported by NASAA rise of about 1.5oC in land temperatures is reported by the Berkeley Earth institute.Considering the albedo effects of aerosols, including sulphur dioxide, dust, nitrate and organic carbon, the mean rise of land temperature exceeds 1.5oC.

The threshold for collapse of the Greenland ice sheet is estimated in the range of 400-560 ppmCO2and approximately 2.0 – 2.5 degrees Celsius above pre-industrial temperatures. The threshold for the breakdown of the West Antarctic ice sheet is similar. The temperature conditions under which the East Antarctic ice sheet formed in the late Eocene – early Oligoceneabrupt cooling period (34.1 to 33.6 Ma) are in the range of ~800–2000 ppm and 4 to 6 degrees Celsius above pre-industrial temperatures. Based mainly on satellite gravity data there are signs the East Antarctic ice sheet is beginning to melt in places (Jones, 2019), with ice loss rates of 40 ± 9 Gt/y (Gigaton ice/year) in 1979–1990 and up to to 252 ± 26 Gt/y in 2009–2017 (Rignot et al., 2019). 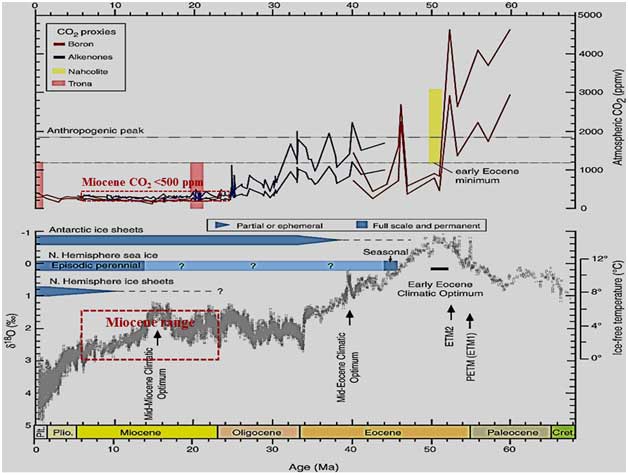 As the glacial sheets disintegrate cold ice melt water flowing into the ocean lead to the formation of large cold water pools, as indicated by interglacial records of the last 450 kyr, including a growth of cold pools in the northern Atlantic Oceansouth of Greenlandand in the southern Ocean fringingAntarctica (Figures 3, 4). Warming of the Arctic driven by the ice-water albedo flipand the weakening of the North Atlantic Thermohaline Circulation lead toweakening of the jet stream and the Arctic boundary.Penetration of Arctic-derived cold air masses southward through the weakened boundary ensues in extreme weather events in North America, Europe and northern Asia.

Warming of 3 to 4 degrees Celsius above pre-industrial levels leading to enhanced ice-sheet melt would raise sea level by 2 to 5 meterstoward the end of the century,and likely by 25 meters in the longer term, a level consistent with Pliocene global temperatures of +2 to 3oC.Golledge et al. (2019) show meltwater from Greenland will lead to substantial slowing of the Atlantic overturning circulation, whilemeltwater from Antarctica will trap warm water below the sea surface, creating a positive feedback that increases Antarctic ice loss. Howeverthe effects of ice-melt waterson the oceans were hardlyincluded in IPCC models.Depending on the amplifying feedbacks, prolonged Greenland and Antarctic melting(Figures 3 and 4) and a long term stadial freeze event may ensue, lasting perhaps as long as  two to three centuries as in the8200 years-oldLaurentian melt event, and even as long as the Younger dryas12.9-11.7 Kyr. 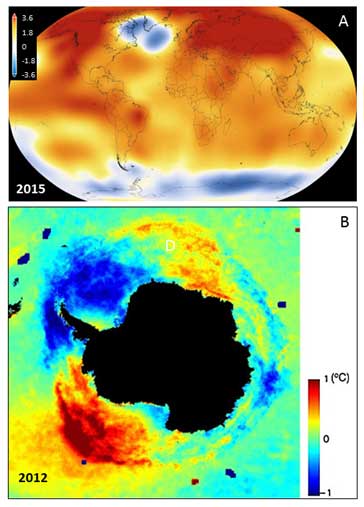 Modelling of climate trends for the 21st to 23rd centuries by the IPCC AR5 Synthesis Report, 2014portrayspredominantly linear models for greenhouse gas rise, global temperatures and sea levels.These models however appear to take little account of amplifying feedbacks from land and ocean and of the effects of cold ice-melt water on the oceans. According to Steffen et al. (2018) “self-reinforcing feedbacks could push the Earth System toward a planetary threshold” and “would lead to a much higher global average temperature than any interglacial in the past 1.2 million years and to sea levels significantly higher than at any time in the Holocene”.

Amplifying feedbacks of global warming include:

A. The albedo-flip in melting sea ice and ice sheets, increasing the water surface area and thereby the sequestration of CO2. Hudson (2011) estimates a rise in radiative forcing due to removal of Arctic summer sea ice as 0.7Watt/m2, which is a value close to the total of methane release since 1750 (~0.5Watt/m2).

B. Reduced ocean’s CO2intake due to lesser solubility of the gas at higher temperatures.

C. Vegetation desiccation and loss in some regions, and thereby reduced evaporation with its cooling effect. This factor and the increase of precipitations in other regions lead to a differential feedbacks from vegetation as the globe warms (Notaro et al. 2007).

E. Release of methane from permafrost, bogs and sediments and other factors.

Linear temperature models do not appear to take into account the effects on the oceansof ice melt water derived from the large ice sheets, including the possibility of a major stadial event such as already started in oceanic tracts fringing Greenland and Antarctica (Figure 3). In the shorter term sea level rises include the Greenland ice sheet (6-7 meter sea level rise) and West Antarctic ice sheet melt (4.8 meter sea level rise). Referring to major past stadial events, including the 8200 years-old Laurentian melt event and the 12.7-11.9 younger dryas event, a prolonged breakdown of parts of the Antarctic ice sheet could result in major sea level rise and extensive cooling of northern and southern latitudes, parallel with warming of tropical and mid-latitudes(Figure 4) (Hansen et al.. 2016).The clashes between polar-derived cold weather fronts and tropical air masses are bound to lead to extreme weather events, echoed in Storms my grandchildren (Hansen, 2010). 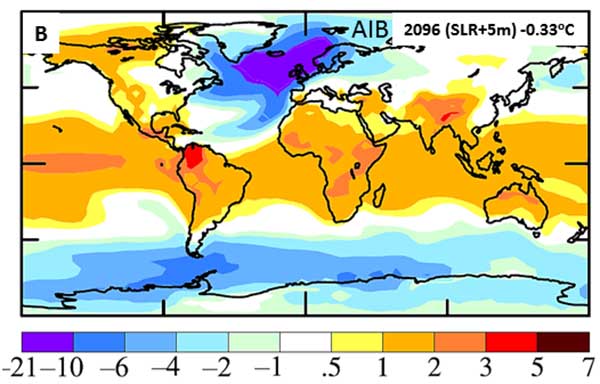 Hansen et al 2016.The projection betrays major cooling of the North Atlantic Ocean, cooling of the circum-Antarctic Oceanand further warming in the tropics, subtropics and the interior of continents, including Siberia and Canada.