“To be honest, I do not understand the United States,” said New Zealand Prime Minister Jacinda Ardern

The White House announced Wednesday it will not join a global initiative, launched in the wake of a massacre in New Zealand two months ago, to tackle racist and extremist online content.

“By not standing alongside other world leaders to fight hate,” said the Southern Poverty Law Center in response, “President Trump has shown once again that he doesn’t understand the importance of white supremacy in fueling terrorism.”

The Christchurch Call—which has the backing of 17 countries plus the European Commission and eight major tech companies including Twitter, Google, and Facebook—was launched Wednesday by New Zealand Prime Minister Jacinda Ardern and French President Emmanuel Macron. 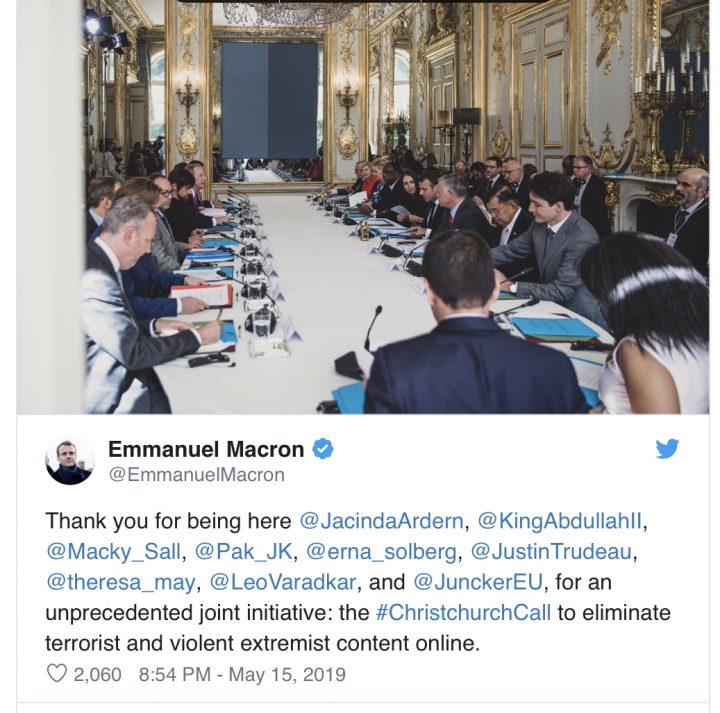 The initiative comes exactly two months after the terrorist attack on worshipers at mosques in Christchurch, New Zealand, in which a gunman who professed racist hatred against Muslims and immigrants livestreamed his slaughter of  51 people.

“This attack was part of a horrifying new trend that seems to be spreading around the world,” Ardern wrote in an op-ed at the New York Times last week. “It was designed to be broadcast on the internet.”

She denounced the “staggering” scale of the video’s reach:

Original footage of the livestream was viewed some 4,000 times before being removed from Facebook. Within the first 24 hours, 1.5 million copies of the video had been taken down from the platform. There was one upload per second to YouTube in the first 24 hours.”

The right to free expression, she wrote, “does not include the freedom to broadcast mass murder.”

Ending that threat, she added, necessitates collaboration—thus the Christchurch Call.

It calls on “governments and private corporations to prevent the posting of terrorist content online, to remove it quickly when it does appear, and to prevent the use of live-streaming to broadcast violence,” as the Irish Times reported.

The Trump administration gave the initiative a hard pass.

While saying it supported the call’s “overall goals,” the White House’s Office of Science and Technology Policy said in a release that “the best tool to defeat terrorist speech is productive speech, and thus we emphasize the importance of promoting credible, alternative narratives as the primary means by which we can defeat terrorist messaging.”

“Sandy Hook happened six years ago and we can’t even get the Senate to hold a vote on universal background checks w/ #HR8,” the freshman congresswoman tweeted at the time. “Christchurch happened, and within days New Zealand acted to get weapons of war out of the consumer market.”

The inaction has Ardern scratching her head.

Speaking to CNN‘s Christiane Amanpour, Ardern said this week: “Australia experienced a massacre and changed their laws. New Zealand had its experience and changed its laws. To be honest, I do not understand the United States.”