Kandhroli, India. Last May 4, 2019, a celebration was held at the Kandhroli Park of Study and Reflection to mark the 50th year anniversary of New or Universalist Humanism. 50 years ago, at the foot of Mount Aconcagua in the Andes Mountains, in a desolate spot called Punta de Vacas, the Argentine thinker-writer called Silo, gave a speech entitled “The Healing of Suffering” in front of a few hundred listeners. The ideas he expressed during that historic “arenga” gave birth to the Humanist Movement that spread across all five continents, a movement of volunteers from different walks of life, classes and creed, who came together with a common vision and a shared aspiration of building a better world, one where the human being is given the highest value, a world of diversity without violence and discrimination, a movement whose project is to humanize the earth.

Here is a report of what transpired during the celebration from Professor Parimal Merchant, a volunteer member of the National Co-ordination team at the World Center for Humanist Studies, one of the organisms of the  Humanist Movement.

“Welcome to the Parks of Study and Reflection – Kandhroli

Thank you for joining in the 50th Years celebration at the Parks of Study and Reflection–  the place to work on deep internal studies – open to all without any discrimination. 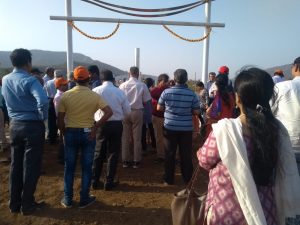 We entered the park through the gate – a boundary separating two spaces: space of external noise with space of internal silence. The space of daily life and that of seclusion and reflection. 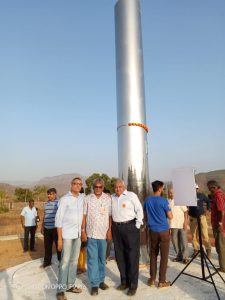 We approached the Monolith – the kind of architectural structure that we find through history in all parts of the world. In other times, such connectives between “heaven” and “earth” were sometimes referred to as ‘axis’ of the world. 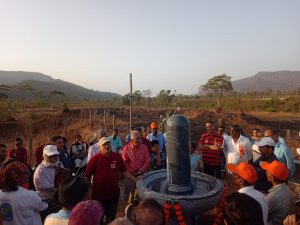 Then we moved to the Fountain – In all creation myths, water is the source of life, with its infinite attributes of nourishing, giving life, purifying, etc. That is why in ancient civilizations, water is the symbol of the sacred. In ancient India, the “linga” was a column of fire that joined the heavens and the earth dividing them and bringing them together at the same time. 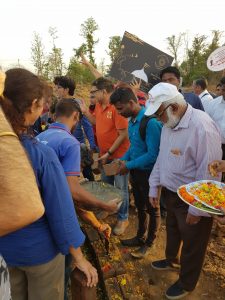 Next, we did the ground-breaking ceremony of the meditation hall. The proposed structure, to be built like the great Stupa, will be hemispherical and touch the sky with the tip of its cupola. Within this structure, all people, believers or non-believers, can feel at home and focus on their internal world. Inside of the proposed hall, people arrange themselves in circles – a symbol of equality of all human beings. 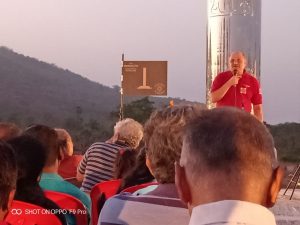 After the groundbreaking, we gathered at the Monolith and did the ceremony of Service. It involved imagining a transparent and luminous sphere descending to us, resting in our heart and expanding in the form of a growing sensation all over our body. It ended up with feeling the force and its internal brilliance – the force that gives energy to our body and our mind. 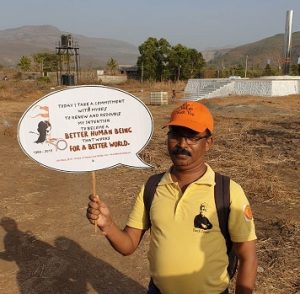 It was also the time for us to renew our resolution – to become better human beings and to contribute to building a better world. 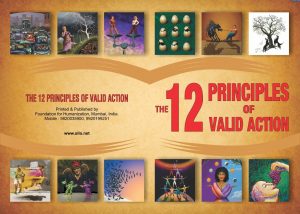 We also launched the booklet of Hindi translations on the elaborations of The Principles –laws of behavior that will not be governed by external dictates but by internal experience. They are descriptions of how forces will function and whether the action will bring happiness or suffering within the individual. 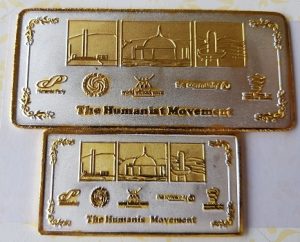 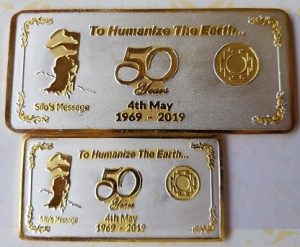 To commemorate the 50 years of completion of the first historic talk by Silo, we launched silver plates in two sizes with wordings in gold.

Finally, in a high spirit of celebration, we formed a peace symbol with all present joining hands together and forming two huge circles – one inside and one outside warmly wishing each other Peace, Force and Joy.