This article is a transcription extracted from a conference at Rothko Chapel. 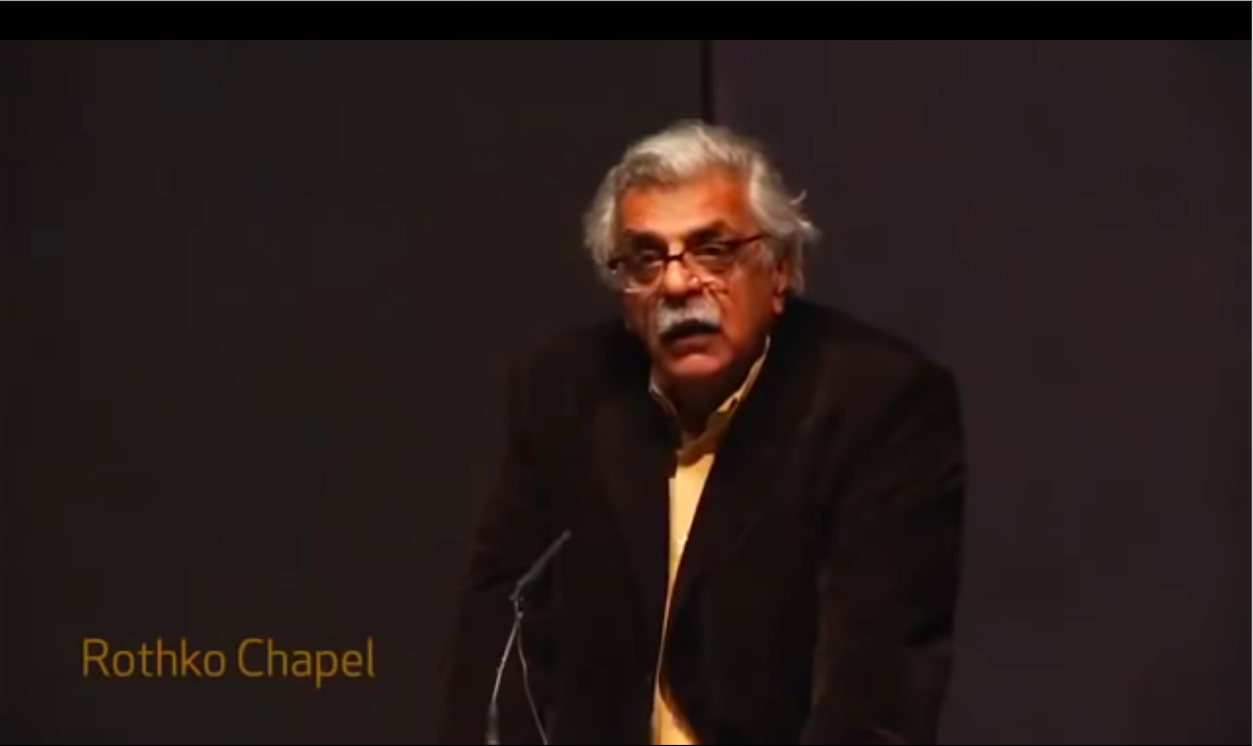 “…
In order to create a myth to justify the existence of the state (Israel), the Zionist leaders of Israel had two arguments:
– one, that these were biblical lands historically belonging to the Jewish people;
– and secondly, these lands were concentrated in what is now Palestine.

Therefore the occupation of Palestine and the creation of Israel in this particular territory was absolutely essential.

Now, you know, many of us argued against, and they would say they argue too, but… we don’t matter.
What is interesting now is that a very distinguished Jewish historian, or I should say an Israeli historian because that is: he prefers being referred to as an Israeli historian, Shlomo Sand at the University of Tel Aviv, wrote a very interesting book which created a storm. And his book, which was written initially in Hebrew, became a best-seller in Israel, just took the country by storm. It took some time before it was published in the West but it finally was, first in France and then in Britain and the United States. It created a big debate and what was very interesting was that Shlomo Sand essentially deconstructed all the myths of Zionism, quite calmly, and he said: “look, we shouldn’t use these myths to justify the existence of Israel”.
Israel is here to stay. I think all the citizens of Israel, whether they’re Jews or Palestinians, Arabs, Christians, Muslims, should have the same rights. And we should stop the right that, if you’re a Jew, you can come back to this land. It’s crazy, he said, why should we do this anymore? But in order to put this argument forward he really did a lot of historical and anthropological work, and he argued that, after the destruction of the temple in AD 70, contrary to mythology there were no expulsions of Jews from the region. He pointed out correctly that the Romans were not in the habit of expelling populations from lands that they conquered, because they were very intelligent and they needed cultivators and people working the areas, because the Roman legions didn’t do that.

And he (Shlomo) said not only were there no expulsions but, at the same time, there were Jewish communities numbering 4 million people, which is a huge amount for those times, in Persia, Egypt, Asia Minor and elsewhere, who stayed out.

And he then argued that the notion that the Jewish faith, after the separation of the reform movement known as Christianity from it, didn’t believe in proselytization is totally false: they did (proselitism), many people were converted; some converted themselves, and the Ashkenazi Jews in particular grew out of the mass conversions on the edge of the Caspian Sea, between the seventh and tenth centuries, off the khazars, who finally adopted Hebrew and converted to Judaism wholesale, and these are the Ashkenazi Jews who peopled Europe, and the ghettos of Europe, and who suffered under the Holocaust and all that.

These are those people descending from the khazars so he (Shlomo) said they in particular, who formed the bulk of the Zionist movement, had absolutely no connection with the Arab lands at all. Then he went even further so he said: if Palestine is not the unique ancestral homeland of the Jews, what happened to all the Jews in these countries? And here he comes up with a devastating explanation: he says by and large in their majority they converted to Islam, they converted to Islam, most of them not all of them, as many other people did in that region at the time.

And he says that the Palestinians whom we have been expelling and oppressing are the direct descendants of the Jews who used to live, actually live in this land. It’s a remarkable book, and it has created a huge debate, and the debate, he says, is not in Israel. And it’s interesting this: most Israeli historians accept that this is accurate, but they say their response to science is to say: well, you know, every nation creates its own mythology so what’s the big deal? But you know this is also true, by the way, but this mythology is very potent, and very powerful because this thing that is unleashed is still going on.

I mean, no one would mind the mythology if everything had been settled and some agreement had been reached, but because it hasn’t, it becomes a very disruptive force. And Shlomo Sand himself is by no means a radical figure. He says: I’m not a hardcore Zionist but I believe in Israel, except that I think all citizens should have equal rights and you can’t say to the Palestinians: “don’t come back to lands that were taken away from you”, as long as you keep saying to Jews, wherever they may be in whichever part of the world: “you can come back whenever you want”. And he said that’s why he wrote the book: to fight for equality. And the big attacks on the book have come from the Diaspora. I mean the New York Times ran a big, big review of it, which created a huge controversy. And in France and in Britain there was no controversy at all, by and large it was accepted that what he argued was true. I mean all the historians who reviewed the book said it’s accurate, you know, you can’t sort of catch him out of history, because we accept this. But the Diaspora was angry that this had even been said, to which Sand replied very very sharply: “well, if you’re so keen to say that I’m wrong and what I’m doing is harming Israel, why don’t you put your money where your mouth is, and leave the diaspora and come and settle in Israel?”.

He said: “if you’re that keen on the country, why don’t you come and live here, we live here and we know how we live”. And he said that: “how we live is not good, either for us or for the non-jews in that part of the world, and that is why I’ve written my book”.

Now, he’s a very courageous guy, by the way he’s not the only one: many Israeli historians have written books of this sort but do they have any impact on the rulers of the world or the rulers of Israel?
And here I think the answer is no.

And one of the interesting thing Shlomo Sand quotes in his book is a statement from David ben Gurion, one of the founding fathers of Israel, in 1918, where ben Gurion writes: “you know, people ask what happened to the Jews who lived in this region. They were loyal to the land and in order to stay in this land, he says, most of the Jews became Muslims”. So he knew it, and they knew it, the leaders of Israel, that this mythology that was being created on the basis of quotations from the Old Testament was largely mythology, not based on any historical reality at all.

So here you have an example of history being abused, but at the same time the abuse triggering off a huge and very creative debate, but of course debates alone and books, even as strong and powerful as the one written by this Israeli historian, do not sway the minds of politicians or rulers because ultimately they do not rule on the basis of the myths. The myths are to keep people in line, they rule for other reasons: to keep themselves in power, to keep control of the society as it is, and this doesn’t just apply to Israel, it applies to most of the rulers of different parts of the world, of the world today.
…”

1 Tariq Ali is a BritishPakistani writer, journalist, historian, filmmaker, political activist, and public intellectual. He is a member of the editorial committee of the New Left Review and Sin Permiso, and contributes to The Guardian, CounterPunch, and theLondon Review of Books. He reads PPE at Exeter College, Oxford.
He is the author of several books, including Pakistan: Military Rule or People’s Power (1970), Can Pakistan Survive? The Death of a State (1983), Clash of Fundamentalisms: Crusades, Jihads and Modernity (2002), Bush in Babylon (2003), Conversations with Edward Said (2005), Pirates Of The Caribbean: Axis Of Hope (2006), A Banker for All Seasons (2007), The Duel (2008), The Obama Syndrome (2010) and The Extreme Centre: A Warning (2015).