Tamara Carrasco campaigns for an independent Catalonia. She was arrested and has been in house arrest for months

In the morning of April 10, 2018, the 35-year-old social worker Tamara Carrasco García is woken by loud knocking on the front door. When she opens, there are a dozen Spanish paramilitary Guardia Civil in camouflage uniforms with machine guns. They have a search warrant against her and a warrant as a suspect of rebellion, sedition and belonging to a terrorist organization. Tamara is not aware of being guilty of anything: “I never risked more than a speeding ticket or an accusation for disobedience,” she says, sitting in a small library in the centre of her home town of Viladecans, a city not far from the Catalan metropolis of Barcelona.

The Guardia Civil searches the 70 square metre apartment for four hours. The officers confiscate a yellow whistle, a poster labelled “Freedom and Democracy,” a photo of the jailed president of the cultural association Òmnium Cultural, Jordi Cuixart, a broken cell phone, and a memory stick. Tamara stands by the window and hears the media in front of her house reporting on her. “The journalists were there at the same time as the police and knew more details than I did.” Like most Spaniards of her age, Tamara grew up watching the arrests of suspected ETA terrorists. When the Guardia Civil asks her if she wants to cover her face when leaving the house, she refuses. She does not want to supply that kind of picture. Even today, she still has the flashes of the photo cameras in front of here inner eye as she was led across the square in front of her house. She is convinced that her arrest had been staged for the media.

Tamara is taken to Madrid and spends two days in a five-square-meter cell. She is not allowed to speak with a lawyer. Tamara remains silent. Nevertheless, she is forced to interrogation. The only phone call she can make is to friends, not her family. Tamara is for an independent Catalonia, her father for the unity of Spain. That’s why they often clash at family gatherings. Back in her cell, Tamara keeps saying to herself, “I did not do anything bad, I’m a strong woman.” She is very scared right then. “Only someone trapped in a cell like that can understand this.”

On the third day, she is taken in handcuffs before the judge of the Audiencia Nacional, a special court for particularly serious crimes. There she meets her lawyer, whom her parents have hired. In court, she only answers his questions. When the prosecutor reads the allegations, Tamara does not recognize herself. She is accused of planning an attack on the barracks of the Guardia Civil in Barcelona. Later, it turns out that the allegation was based on a Google Maps picture that she had saved to help her get to a demonstration. She is also accused of being the coordinator of the “Committees for the Defence of the Republic” (CDR) and of being guilty of inciting to crimes such as blockading highways over the Easter weekend. “If you know something about CDRs, you know their structure is horizontal. They have no coordinators”, Tamara explains.

The accusation papers also mention Adrià Carrasco, who was to be arrested on the same day as Tamara, but was able to escape and seek refuge in Belgium. “The Guardia Civil thought we were related because of the same surname, but we don’t know each other,” Tamara says. The defence lawyer loses his temper at that juncture.

“He complained that it was a political process without a legal basis”, Tamara recalls. The public prosecutor then threatened the lawyer with a lawsuit for partiality. The judge ended the hearing when the exchanges between the jurists began to get heated. A quarter of an hour later, Tamara was let free, with restrictions.

Only later does she realize what these restrictions mean for her. Tamara is only allowed to leave Viladecans to go to work in Barcelona, ​​and she has to report to the local court every week. The Guardia Civil stalks her. After a few weeks, Tamara stays away from work, because the psychological pressure becomes too high. Her family and many friends live in other places and come to visit her. When her mother breaks her leg and cannot drive to see her daughter, Tamara requests permission to visit her. The request is turned down.

At first, the repression against Tamara has an intimidating effect on the CDRs. There have been no more actions in the entire area of ​​the Baix Llobregat where Viladecans is located. The activists are afraid and do not want to give the prosecution any arguments against Tamara and Adrià.

“It’s like a wave that is not only aimed at you, but spreads to your entire environment. Until recently, I was watched very closely – as were all those who surround me”, says Tamara.

No court has jurisdiction

In early November, the judge decides that there is no evidence of rebellion, terrorism and sedition against Tamara. Nevertheless, the house arrest is not lifted. Her current defence lawyer Benet Salellas explains the absurd situation in a telephone conversation:

“There is a final legal decision. The Audiencia Nacional says it has no jurisdiction because it sees no evidence of the allegations. This means the case goes to the general courts. That is, the case is handed over to the court in whose jurisdiction the investigated incidents took place. But we do not know what actions exactly my client is being prosecuted for”.

Since no specific realised actions can be attributed to her, the Audiencia Nacional simultaneously sends the case to the courts in four districts: Lleida, Girona, Barcelona and Tarragona.

“Tamara does not live in any of the four, it’s sheer nonsense,” her lawyer spells out his lack of understanding. It will probably take months for a court to declare its jurisdiction and then possibly suspend her already eight-month-long house arrest.

Her lawyer believes there is a clear intention behind this situation: “We know the CDR phenomenon, and we do not think that the concept of terrorism can be applied to them. They are an expression of non-violent resistance. But Spain wants to paint a picture that worked in the Basque Country in the 1990s and create parallels that do not correspond to reality. When politicians and lawyers compare the CDRs with Kale borroka (violent street actions of supporters of the Basque independence movement), they deliberately mix concepts. I believe that this is an operation by the state to try to change the reality in Catalonia”, says Salellas.

From Tamara’s point of view, her situation has also had positive effects. Before then, daughter and father were ideologically far apart. Meanwhile her family doubts the system. “My dad still opts for Spain, but now he understands why I do what I do,” Tamara says almost proudly.

Many residents of their town Viladecans are more inclined to leave things in Spain as they are. But she receives support from all sides. “Many pro-Spanish neighbours have shown their solidarity with me because they know that I would not harm a fly.” More and more people come to understand that this is not just about the independence of Catalonia, but about fundamental rights, Tamara thinks. “If you’re a nuisance, they use the ‘gag law’ (Basic Law for the Protection of Public Security) against you,” she says.

Staying at home out of fear is not an option for her. She now wants to take part even more: “It’s a question of my dignity.”

“For three days I was the most hated person in Spain. I received more than 300 death threats on my phone. I was made a public person. Adrià had to go into exile. We have not had any legal process to defend ourselves”.

Tamara believes that the repression could possibly bring Catalonia closer to independence. The first thing she would change in an independent Catalonia would be the criminal law. “If we start a republic, we have to make sure that what has happened to me never happens to anyone at all.”

Originally published in Junge Welt, 27 December 2018, republished in Pressenza by kind permission of the author and translated by Miquel Strubell Trueta. 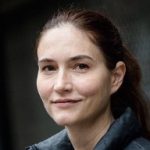