BUENOS AIRES, Dec 22 2018 (IPS) – “In 2001 I was raped. I was 31 years old, had two university degrees and was still doing postgraduate studies, I had family, friends, a job. Many more resources than most rape victims have. Even so, it was the start of an ordeal whose scars I still feel today.”

Stories like this one, published on Twitter on Dec. 13 by Ana Castellani, a sociologist and professor at the University of Buenos Aires, are popping up all over Argentina’s social networks these days.

At the same time, public and private institutions dedicated to the defence of women’s rights are overwhelmed by an unusually heavy stream of demands.

“Her public statement broke down the common idea that these issues should not be talked about in public…In the case of sexual assaults on women in Argentina, the shame was not on the side of the aggressor but on the side of the victim, because it was thought that she had surely done something to turn him on.” — Eleonor Faur

This South American country is experiencing an explosion of reports of sexual violence against women and children, following a shocking public event that occurred on Dec. 11.

That day, at a Buenos Aires theater, more than 200 actresses surrounded a young colleague, Thelma Fardín, who reported that in 2009, when she was 16, she was raped by a well-known soap opera star, Juan Darthés, almost 30 years older, during a tour of Nicaragua with a children’s television programme.

“Thanks to the fact that someone broke the silence, I can now talk about what happened,” said Fardín in tears, referring to two other actresses who had reported weeks earlier that they were the victims of sexual harassment by Darthés. In the days prior to this public revelation, Fardín had traveled to the Central American country to file a criminal complaint against the actor.

“The public repercussion was much greater than we expected. What Thelma said encouraged thousands of women to who were silent to speak out,” Mirta Busnelli, a renowned actress with more than 40 years of experience in film, theatre and TV, told IPS. She is part of the group that backed the complaint with her presence.

“When you talk to women, inside and outside the arts scene, almost all of them have suffered a situation of sexual harassment or abuse, which they silenced even in their own conscience,” said Busnelli.

She added: “This doesn’t happen by chance. It happens because the person who dares speak out is usually revictimised. The veracity of her story is questioned or people wonder whether the woman herself has not provoked the problem because of how she was dressed or because of her attitude. We trust that things will begin to change.”

The magnitude of the wave of reports of sexual violence was such that political leaders felt compelled to take an active stance.

Just a few hours after Fardín spoke out publicly, President Mauricio Macri announced the inclusion, during an extraordinary session of Congress, which usually holds a recess in December, of a bill that establishes mandatory training on the gender perspective for public officials of all branches of power.

The bill was presented by an opposition congresswoman in 2017 after the rape and murder in the eastern province of Entre Ríos of 17-year-old Micaela García by a man who had already served time for rape and was on parole. 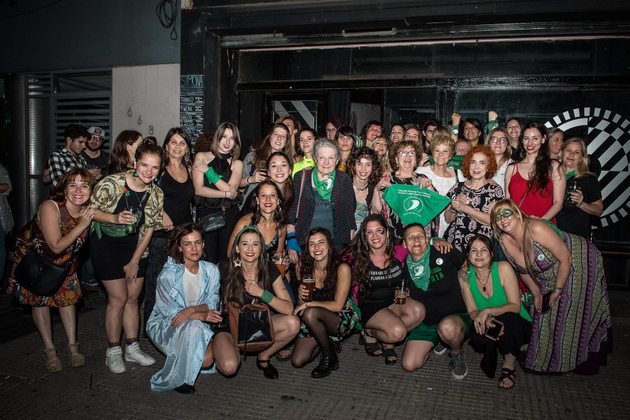 A picture from the end of the year party of the Argentine Actresses collective, which came out in full support of the public revelation by a colleague who said she was raped at the age of 16, in 2009, by a famous soap opera star almost 30 years older than her.

Like Macri, the deputies and senators acted quickly, because in their first extraordinary session, on Wednesday Dec. 19, they passed the law with only one vote against, from Deputy Alfredo Olmedo, who a few hours earlier had traveled to Brazil, where he was photographed with far-right president-elect, Jair Bolsonaro.

“I was the only deputy who voted against gender ideology. I will continue to maintain that God created man and woman,” Olmedo boasted on the social networks.

As a sign of the current climate, the Dec. 19 session in the Senate began with the half-hearted defence of a senator of the governing alliance Cambiemos, Juan Carlos Marino, who after Thelma Fardín’s revelation was denounced by a congressional employee, who said he molested her in an office of Congress and harassed her with Whatsapp

The cases that touched on politics and entertainment were many, in reality, but none was as shocking as that of Luis María Rodríguez, sports director of the city of San Pedro, 170 kilometers northwest of Buenos Aires.

Rodriguez was denounced on Dec. 16 by a young woman who uploaded a video to Youtube in which she said that he had raped her when she was 13 years old and he was her dance teacher. Hours later Rodriguez was found hanged in his home.

The 2015 murder of a teenage girl by her boyfriend was the spark that gave birth to the movement #NiUnaMenos (Not One Woman Less), which has obtained several victories and raised public awareness about femicides – gender-based murders.

“In the last few days, our phones have blown up,” said María Soledad Dawson, one of the coordinators of the Ministry of Justice’s Victims Against Violence Programme, which receives reports of abuse and ill-treatment.

“After the Thelma Fardín case, a lot of people started calling who had never before dared, or who thought that, after several years, they couldn’t report a case,” she told IPS.

“We usually received the bulk of the calls between 6:00 p.m. and 9:00 p.m.. Now we continue to answer the phone into the wee hours of the morning,” she added.

The National Child Sexual Abuse Hotline reported that the day after the actress’s complaint, 214 calls were received, compared to 16 the day before.

For its part, the government’s National Women’s Institute revealed that the hotline for women in situations of violence received 6008 calls in the four days prior to the Fardín case and 12,855 in the four subsequent days.

The sociologist Eleonor Faur, who specialises in gender issues, said the impact is due to the fact that “the presentation by the Argentine Actresses collective was very solid. It was very well-organised, with advice from lawyers and feminist journalists.”

“Above and beyond the specific case, they showed that sexual violence is a completely accepted modus operandi in show business,” she told IPS.

Figures from organisations that address male violence indicate that in this country of 44 million people, some 300 women are murdered each year because they are women. In 2017 there were 295 femicides, indicating that the #NiUnaMenos movement did not manage to reduce these crimes.

The Argentine Actresses, a group made up of more than 300 artists, was formed in April, when the country mobilised for the legislative debate on the decriminalisation of abortion, which in August was narrowly defeated by the Senate (by 38 votes to 31), after it was approved in the Chamber of Deputies.

In fact, when Thelma Fardín made her public statement, the actresses surrounding her wore green scarves on their wrists or necks – the local symbol of the struggle for the legalisation of abortion.

“Her public statement broke down the common idea that these issues should not be talked about in public,” Faur added.

“Now the most interesting thing will be to see how the public institutions and the different social organisations react, which after this cultural change are going to have to do a lot of back-pedalling,” she said.