“We can no longer save the world by playing by the rules,” says Greta Thunberg, “because the rules have to be changed.”

Striking her mark at the COP24 climate talks taking place this week and next in Poland, fifteen-year-old Greta Thunberg of Sweden issued a stern rebuke on behalf of the world’s youth climate movement to the adult diplomats, executives, and elected leaders gathered by telling them she was not there asking for help or demanding they comply with demands but to let them know that new political realities and a renewable energy transformation are coming whether they like it or not.

Thunberg said that she was not asking anything of the gathered leaders—even as she sat next to UN Secretary General António Guterres—but only asking the people of the world “to realize that our political leaders have failed us, because we are facing an existential threat and there’s no time to continue down this road of madness.”

“So we have not come here to beg the world leaders to care for our future,” she declared. “They have ignored us in the past and they will ignore us again. We have come here to let them know that change is coming whether they like it or not. The people will rise to the challenge.” 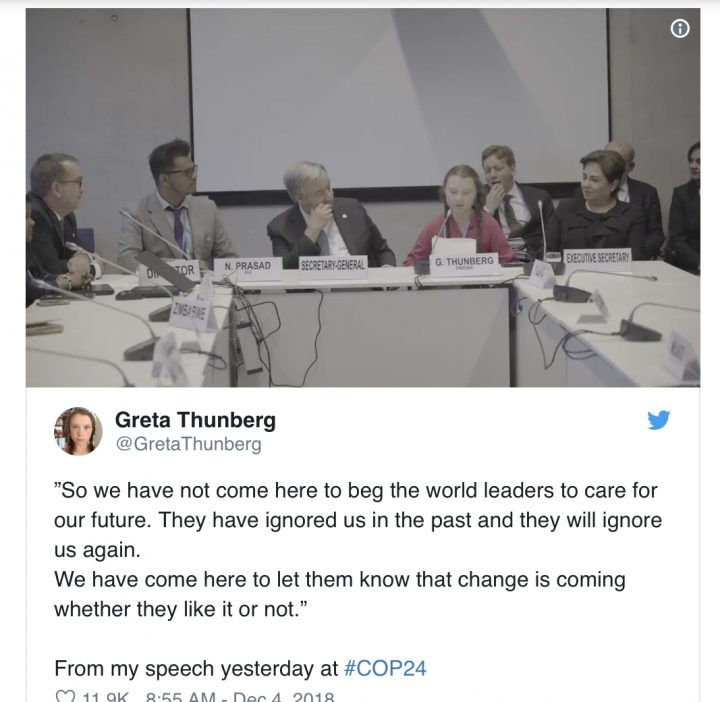 “On climate change,” said Kevin Anderson, professor of energy and climate change at the University of Manchester, the teenage Thunberg “demonstrates more clarity and leadership in one speech than a quarter of a century of the combined contributions of so called world leaders. Wilful ignorance and lies have overseen a 65 percent rise in CO2 since 1990. Time to hand over the baton.”

The climate crisis, she said, “is the biggest crisis humanity has ever faced. First we have to realize this and then as fast as possible do something to stop the emissions and try to save what we can save.”