The Stansted 15 protesters, who stopped a government deportation flight from taking off in March last year, have today been found guilty of breaching terror laws. After 9 weeks the jury found all fifteen defendants guilty of intentional disruption of services and endangerment at an aerodrome under the 1990 Aviation and Maritime Security Act – a controversial use of terror-related law.

The Stansted 15 were accused by the government of putting the safety of the airport and passengers at risk, a charge rejected by all 15 defendants. The trial followed a peaceful action which stopped a chartered deportation flight from taking off in March 2017. The defendants could now face up to life in prison. Sentencing will take place soon.

Responding to the verdict in a statement the Stansted 15 said: “We are guilty of nothing more than intervening to prevent harm. The real crime is the government’s cowardly, inhumane and barely legal deportation flights and the unprecedented use of terror law to crack down on peaceful protest. We must challenge this shocking use of draconian legislation, and continue to demand an immediate end to these secretive deportation charter flights and a full independent public inquiry into the government’s ‘hostile environment’.”

“Justice will not be done until we are exonerated and the Home Office is held to account for the danger it puts people in every single day. It endangers people in dawn raids on their homes, at detention centres and on these brutal flights. The system is out of control. It is unfair, unjust and unlawful and it must be stopped.”

Melanie Strickland, one of the defendants, said: “To be found guilty of a terror-related charge for a peaceful protest is devastating for us, and profoundly disturbing for democracy in this country.  It’s the Home Office’s brutal, secretive and barely legal practice of mass deportation flights that is putting people in danger, and their ‘hostile environment’ policy that is hurting vulnerable people from our communities. It’s the Home Office that should have been in the dock, not us.”

A man who was set to be deported on the flight but has since been granted a right to remain in the UK said: “The Stansted 15 have been found guilty of breaching a barely used terror law. Though the jury were convinced that their actions breached this legislation, there’s no doubt in my mind that these 15 brave people are heroes, not criminals. For me a crime is doing something that is evil, shameful or just wrong – and it’s clear that it is the actions of the Home Office tick all of these boxes – and the Stansted 15 were trying to stop the real crime being committed.  As the Stansted 15 face their own purgatory – awaiting sentences in the following weeks – I will be praying that they are shown leniency. Without their actions I would have missed my daughter’s birth, and faced the utter injustice of being deported from this country with having my now successful appeal heard. My message to them today is to fight on. Their cause is just, and history will absolve you of the guilt that the system has marked you with.’

Raj Chada, Partner from Hodge Jones & Allen, who represented all 15 of the defendants said: “We are deeply disappointed by today’s verdicts. In our view it is inconceivable that our clients were charged under counter terrorism legislation for what was a just protest against deporting asylum seekers. Hodge Jones & Allen previously represented 13 defendants who protested at Heathrow in similar circumstances to the 15 at Stansted, yet they were not charged with this draconian legislation. We believe this was an abuse of power by the Attorney General and the CPS as they should never have been charged with these offences. The fact is that the actions of these protestors resulted in two people who were about to be wrongfully deported remaining in the UK.” 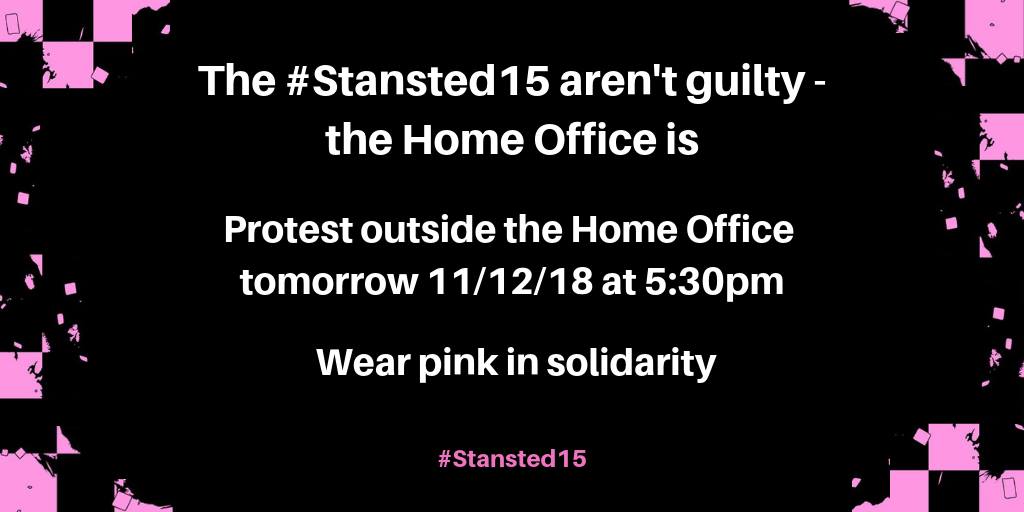