153 US House members and 50 US Senators are millionaires

US Rep.-elect Alexandria Ocasio-Cortez (D-N.Y.) on Saturday called for congressional salaries to be put on hold during the next government shutdown.

The US government went into a partial shutdown at midnight on Friday after President Trump refused to sign a spending bill that did not include $5 billion for his wall on the U.S.-Mexico border. He had long claimed that Mexico would pay for the wall.

“It’s completely unacceptable that members of Congress can force a government shutdown on partisan lines & then have Congressional salaries exempt from that decision,” Ocasio-Cortez wrote on Twitter.

“Have some integrity,” she added, calling for salaries to be furloughed for the next shutdown. 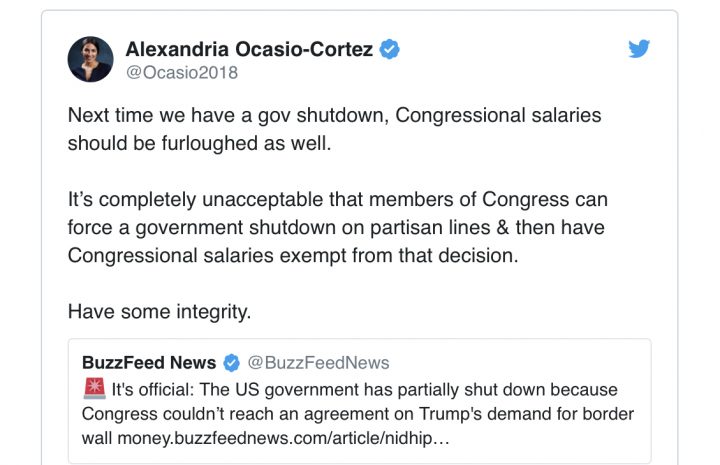 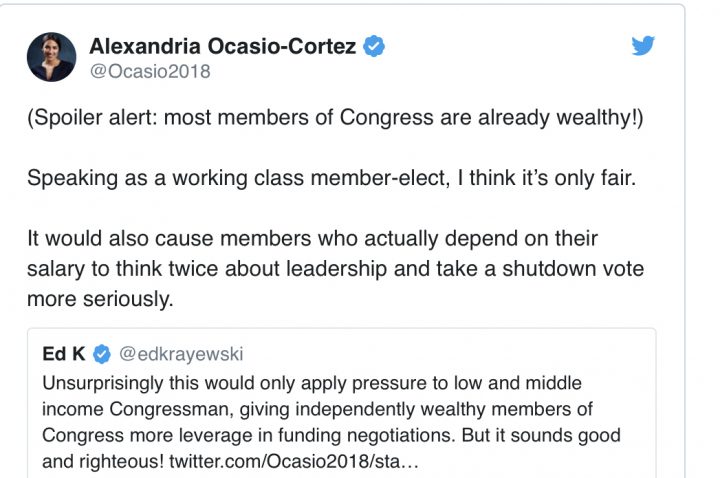 Members of the House and the Senate are paid $174,000 a year. According to Roll Call, 153 House members and 50 senators are millionaires.

More than 420,000 federal workers who are considered “essential” will continue working — but without pay, according to CBS News. Those employees may eventually receive back pay. However, an additional 380,000 workers will be furloughed and may miss a paycheck depending on how long the shutdown lasts.

Ocasio-Cortez, who will join Congress in early January  as the new representative for New York’s 14th District, has been a vocal critic of the demand for $5 billion for a border wall. When the House passed a short-term spending bill with $5.7 billion for border security, Ocasio-Cortez challenged the GOP trope that the federal government simply doesn’t have the money to implement bold progressive policies such as Medicare for All or a Green New Deal.

“And just like that, GOP discovers $5.7 billion for a wall,” Ocasio-Cortez wrote. “But notice how no one’s asking the GOP how they’re paying for it.” 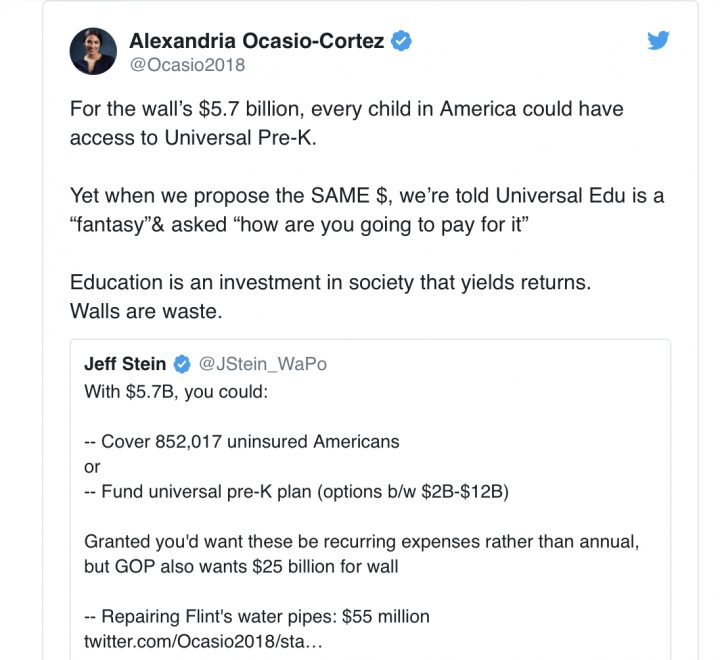 On Friday, she outlined another way the $5.7 billion could be spent instead of Trump’s proposed wall.  “For the wall’s $5.7 billion, every child in America could have access to Universal Pre-K. Yet when we propose the SAME $, we’re told Universal Edu is a ‘fantasy’ & asked ‘how are you going to pay for it.’ Education is investment in society that yields returns,” she tweeted. “Walls are waste.”