The Overtime Act comes into force on 1 January 2019, as President of the Republic János Áder signed the bill the Parliament passed last Wednesday.

The amendment of the Labour Law that the Parliament voted on in a scandalous session on 12 December was proposed by Lajos Kósa and Kristóf Szatmáry MPs. The opposition consistently refers to the new law as the “Slave Law”. At the beginning of Wednesday’s parliamentary session, the opposition blocked the staircase leading up to the Speaker’s pulpit, therefore to preside over the session, the Speaker could only open it sitting in his place. The opposition protested the proposal with sirens and whistles, and they started singing the National Anthem at the time of the final vote. MPs of Fidesz sang with them, then proceeded to vote yes on the amendment.

Will there be a strike then?

Right after the Parliament passed the proposal, the opposition went to Kossuth Square (in front of the Parliament) to protest for three consecutive nights. The series of demonstrations culminated on Sunday, with the crowd marching to the headquarters of the state-owned public media, where they were set on getting airtime for their demands. Several MPs that were with the crowd entered the state TV’s building with the intention of reading the demands live on air (as MPs, they have a right to enter the premises). They were consistently denied access to editors by security staff, so they proceeded to have an all-night sit-in, but in the following morning, in unprecedented scenes, some of them were forcefully removed from the building by the TV’s security staff, while others were supposedly assaulted later on in the day. The protest continued Monday evening, when Tamás Székely, vice president of the Hungarian Federation of Trade Unions promised to organise a general strike in the case that Áder signs the bill.

Should Hungarians brace for the 400 hours of overtime?

The original proposal of Lajos Kósa would originally have raised the legal limit of yearly overtime that can be scheduled for a year from 250 to 400. Later this was changed; the general rule remained 250 with the possibility of raising it to 300 with a collective agreement with the trade union, but based on an individual agreement with the employee the maximum can be 400. The technical term for this is voluntary overtime, but critics say that employees generally are in a more vulnerable position than to be able to say no to voluntary overtime without consequence. 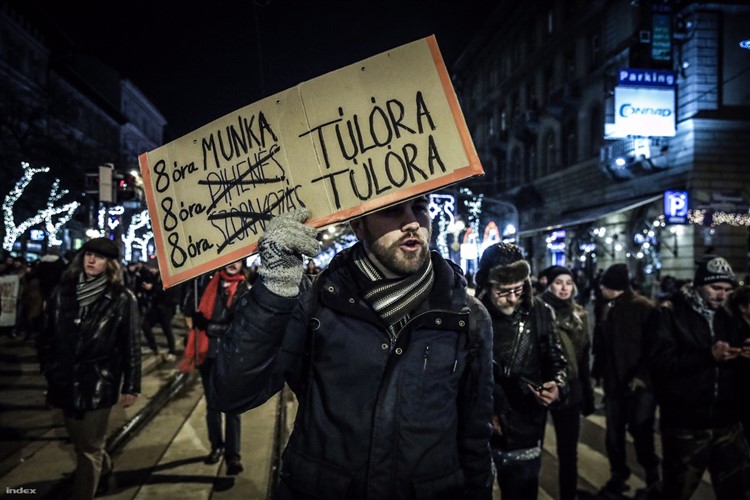 The problem with that is that it is much easier to pressure a work council than a trade union, and work councils are not even authorised to organise strikes, therefore their leverage is smaller as well.

Lajos Kósa, the MP who proposed the Overtime Act doesn’t think that to be a problem since according to him, employees now have a good hand for bargaining.  He said the act could help them in salary negotiations. The 3-year maximum overtime banking period is necessary for some industries to increase competitiveness, and it is not compulsory, he added.

Even Prime Minister Viktor Orbán expressed his views on the topic. He said the new law only serves the interest of the workers, and as he said, he is “respectful of and keeping an eye on trade unions, but they are wrong.”

This article is the translation of the original published in Hungarian.