After 15 years of calling and lobbying state legislators to no avail, undocumented immigrants in New Jersey are coming together to launch a new campaign for driver’s licenses — this time with a unique twist. On Sept. 17, hundreds will participate in an act they are calling “paro estatal,” or a statewide-halt — a day of noncooperation in which workers will stay home, parents will keep  their children from going to school, and local shops will stay closed, all in support of the demand for driver’s licenses.

The main group pushing this new strategy of economic non-cooperation is Movimiento Cosecha — a nonviolent movement fighting for the permanent protection and dignity of all 11 million undocumented immigrants in the United States. (Full disclosure, I have been organizing with Cosecha for the past two years.) In addition to participating in the one day strike, Cosecha will march to the state capital in Trenton chanting “Licensias Si, Promesas No” or “Yes to Licenses, No to Promises.”

The undocumented community is in critical need of driver’s licenses — the lack of which is felt every day with needs like driving to work, taking children at school and running simple errands. If undocumented immigrants are stopped for driving without a license the consequences can be severe, including detention and deportation. Such threats will only continue as Immigration Customs and Enforcement, or ICE, has its contracts renewed and expanded across the state.

Hudson County, which has the most diverse and densely-populated immigrant cities in the state, just renewed its contract with ICE for another 10 years. Contracts like these allow the state to receive money from ICE to “house” immigrants. With the state profiting off the detention of immigrants, it is easy to see why granting driver’s licenses goes against the interests of government officials: More people with licenses will minimize arrests (at least for traffic violations), which means fewer people in detention.

New Jersey is a state with one of the largest undocumented immigrant populations, almost half a million. The state leans Democratic during most presidential elections, but has been governed by both major parties in recent years. For the last eight years, Republican Gov. Chris Christie ran the state until Phil Murphy, a Democrat, won last November’s election. Gov. Murphy ran on a platform that included driver’s licenses for undocumented immigrants in the first 100 days of his administration. Now seven months into his governorship, the immigrant community still does not have driver’s licenses. 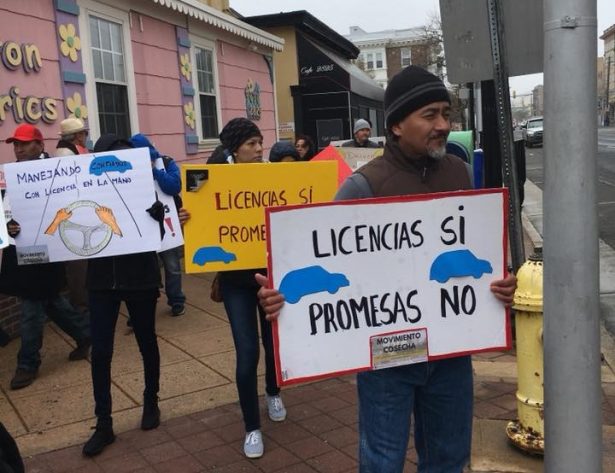 A march by the Cosecha circle in Atlantic City. (Facebook/Cosecha New Jersey)

“Cosecha activated undocumented immigrant workers in the state who no longer want to wait for politicians. We know that no one else will fight this fight but us,” said Carlos Castaneda, an organizer with Cosecha who is coordinating the plan for Sept. 17.

Cosecha’s campaign for driver’s licenses is comprised of three phases. In the first phase, the objective was to organize undocumented immigrant workers into teams, or Cosecha circles. These teams are the now base, anchoring the whole campaign. Getting to this point involved holding community meetings and workshops where people learned and discussed the issue, as well as brainstormed ways to take action in their local communities.

In the second phase, the objective was to activate all the people who had come to the community meetings and workshops. During this phase, Cosecha circles across the state planned and participated in local marches and rallies with the purpose of raising awareness on the issue with those who weren’t yet familiar with the campaign. Circles across the states also participated in an 11-day walk across New Jersey, visiting 25 cities and holding community meetings as they passed through them. This resulted in the creation of more circles in towns like Passaic, Paterson and Red Bank. Now, after much deliberation, these circles are gearing up to launch the third phase on Sept. 17: escalation.

“Since we arrived in this country we have lived in fear of deportation for the mere fact that we don’t have driver’s licenses,” said Alvaro Marquez, a member of one of Cosecha’s circles. “Some things we can’t change, but we have the opportunity to fight for a little peace for ourselves and our family by joining the fight to obtain driver’s licenses. Once we change history, we can look into the eyes of our children, our parents, and tell them that we were part of this change. By joining, participating, we can achieve things we cannot even begin to imagine.”

Yet, no campaign is free of challenges. Since Cosecha is pursuing an outside strategy and calling out politicians, they are having trouble getting information about how the current driver’s license bill is moving through the state’s legislature. A second challenge is that other immigrant rights groups continue to recycle the same actions that have been used over the last 15 years, seeing Cosecha’s introduction of new tactics and strategy as a threat to their past work. The largest and most prevalent hurdle, however, is organizing the immigrant community. 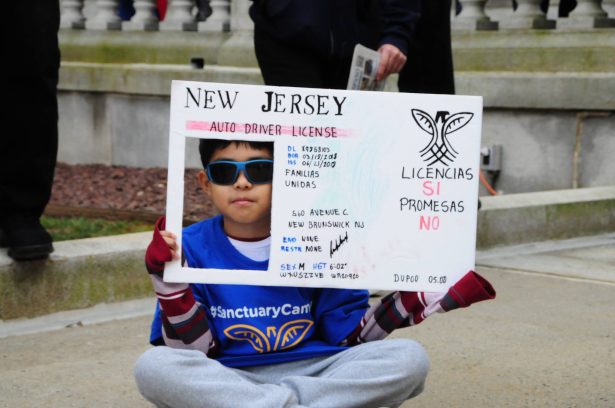 A child named Diego holds a sign at a march in Trenton on April 21. (Facebook/Cosecha New Jersey)

Sept. 17 will be the one of the many days to come when the immigrant community will exercise its power. The state-wide halt will mark a new phase in the driver’s license campaign, which is just the beginning of a longer fight for immigrant rights.

This point is made clear during organizing meetings, when the community talks about the role of the driver’s license campaign in relation to the wider movement. “When we discuss the campaign, people use the slogan ‘licenses today, papers tomorrow’ to talk about how the fight goes beyond the licenses,” explained Dara Marquez, a Cosecha organizer from New Brunswick. “We also ground ourselves in the fight for permanent protection — and more importantly in dignity and respect — because we know that citizenship will not solve all the injustices.”

She also believes the time is ripe for this campaign. “Our community is getting persecuted. What’s the alternative?” she asked. “We can self-deport to where we came from and start all over again, or we can join our communities here, where we now have roots, and fight. We have nothing left to lose.”

When talking about the many strikes by immigrant workers in California, the labor leader and civil rights activist Cesar Chavez once said, “The fight is never about grapes or lettuce. It is always about people.” In a similar vein, the campaign for licenses is not just about licenses, but about people developing a political consciousness and realizing their power.

Regardless of their legal status, immigrants don’t have to depend on politicians to save them. When they organize and take action they become agents of their own destiny and can change history. Undocumented workers will continue to fight, leading the movement themselves, as Castaneda said, “without fear and until they win.”