In May 2018, a group of seven Afghans in the mostly Taliban controlled province of Helmand set off on a more than 370-mile peace journey to the capital city, Kabul, sparking a nationwide movement.

Residents of Helmand have been paying a high price ever since the province turned into a battleground between Afghan forces and the Taliban. The catalyst for the peace march was a car bomb attack during a wrestling match in March that killed 14 people.

The protesters began with a hunger strike and a sit-in protest in the province’s capital, Lashkar Gah, within 24 hours of the suicide attack to demand an end to the violence. The activists held meetings with both the government and the Taliban, but when no results were produced they decided to walk to Kabul to further advocate for their peace message.

The war-weary Afghans traveled across the country, passing through difficult terrain in the scorching hot sun. The final leg of their march happened during the holy month of Ramadan, which they continued while observing their fast. They were welcomed in the villages which they passed through and were offered food, water and places to rest.

In total, they marched across six provinces, passing by Taliban-controlled areas. In the city of Ghazni, they were even warned by the Taliban not to enter an area because it would be dangerous. “We met Taliban fighters and, after an introduction, they told us we shouldn’t have come here because the area is planted with bombs, and they had planned an attack,” one of the protesters told The Telegraph. “After minutes of discussion with them, they seemed tired of it all, and the war. They directed us back to the safest area.”

Their tenacity and courage attracted around a hundred Afghans from places like Kandahar and Herat to join their peace movement, including women. The female protesters were asked to return home after protesting during the day, due to traditional sensitivities around spending nights on the roads. They reached Kabul when the ceasefire on Eid al-Fitr was just coming to an end in June. The protesters had covered over 370 miles by foot in a span of 40 days. They were given a warm greeting by Kabul residents who offered them food and water as well.

Despite being exhausted, the protesters were ready for their next phase of activism. They met Afghan President Ashraf Ghani and gave him a list of demands for sustainable peace. Some of the demands included hosting a place for peace talks, brokering a one-year ceasefire and launching a new mechanism that will look into the interests and needs of all Afghans. The protesters also formed a committee to reach out to the Taliban with a similar set of demands.

The activists then held sit-in protests outside the United Nations Assistance Mission in Afghanistan office and sent a letter to U.N. Secretary General Antonio Guterres, urging him to take a proactive approach towards the ongoing conflict in the country.

The group also strategically targeted key stakeholders and institutions, such as the American, British, Russian, Iranian and Pakistani embassies, which are perceived to have an external hand in the war. They held sit-ins for three days outside each of the embassies and plan to launch solidarity demonstrations in their home countries. “By holding our demonstrations, we want to create a relationship between our people and the citizens of those countries,” Bismillah Watandost, one of the protesters, told TOLO News. “And we hope the citizens of the foreign countries ask their governments why Afghans are protesting outside their embassies.” 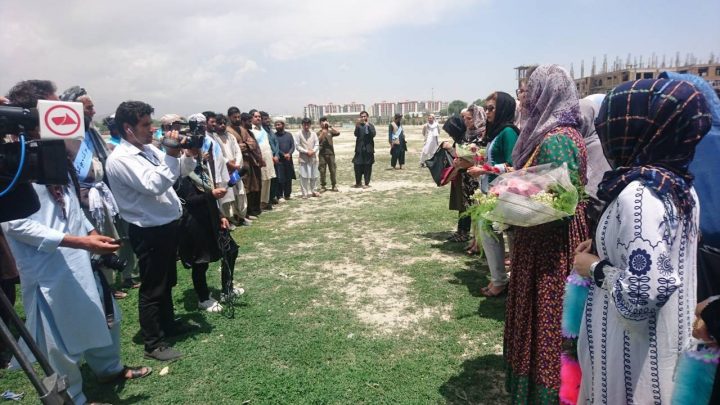 After Kabul, the Helmand protesters carried on with their mission by walking barefoot another 340 miles to reach Mazar-e-Sharif from Aug. 10 to Sept. 11. Their purpose was to bring their message of peace to residents in northern Afghanistan. They also conducted dialogues with religious leaders, tribal elders and the general public in places where they stopped. The protesters had developed various strategies of persuasion and deterrence tailored to the different institutions they were engaging.

Their activism was the result of a well-planned strategy to reach out to their fellow citizens from the southern and northern provinces. The movement was led by Iqbal Khaibar, who is a demonstrator from Helmand and was a key member of the Lashkar Gah sit-in. Khaibar said that they were fearful of reprisals along the way, which is why they developed a strategy of establishing support groups that would continue the march if some of the participants were attacked or killed.

Moreover, the peace march emerged at the right time, just when the Afghan government reached out to the Taliban with an unconditional ceasefire offer. The Afghan High Peace Council — a body established by former President Hamid Karzai to negotiate with the Taliban — has also echoed its support for the Helmand peace movement. The council has played a substantial role in the country’s reconciliation and peacebuilding process.

The Helmand peace march has set a precedent for other nonviolent protests across the country. In June, Afghan women and girls personally welcomed the Taliban with flowers in Helmand province and urged them to extend the Eid al-Fitr ceasefire. Although the Taliban did not respond to the ceasefire extension request, the protest was bold. Their action would have been unthinkable in recent decades, when there were strict restrictions on women’s freedom of movement. Most Afghan women do not leave their houses to attend protests. By pouring out into the streets for an all-female protest, they displayed their audacity and strength.

The peace movement has been one of the key factors pressuring both the government and the Taliban to reach a peace agreement and end the civil war. The three-day ceasefire during Eid al-Fitr was a product of this nonviolent resistance, which added pressure on the Taliban to accept the offer. Although the Taliban ruled out the government’s offer for another ceasefire during Eid al-Adha, it has not stopped the peace movement’s momentum. More peace marches, protests and acts of civil disobedience are regularly springing up in Afghanistan.

The impetus for the peace movement is the growing insecurity and increase in violence since 2001. Most Afghans are simply frustrated with their living conditions and want the war to end. The Uppsala Conflict Data Program has shown a surge in the number of casualties in recent years. In 2001, there were 5,553 deaths in the country. By 2017, the number soared to 19,694.

A 2017 Asia Foundation survey revealed that as the number of fatalities has increased, so too has the fear for personal safety or insecurity — from 40 percent in 2001 to 71 percent in 2017. The survey also demonstrated that the movement is reflective of public opinion in Afghanistan. It found that over 60 percent of Afghans think that a peace process would usher in long-term stability in the country, and more than half of Afghans think that reconciliation with the Taliban is likely to happen. This growing mandate for a peace process has added weight to the country’s peace movement.

Although the Helmand protesters have not said anything about their next phase of activism, the peace movement has become a nationwide phenomenon. It has won the hearts and minds of ordinary Afghans. Moreover, it was also heartening to see the Taliban show compassion to the peace activists. Currently, the Helmand protesters are interacting with residents in the north to gain more support for their movement.

“We [continue to] go to villages and meet the people to support our efforts,” saidMirwais Kanai, one of the organizers. “In the beginning, some people had doubts and were blaming the protesters for being a project of foreigners or the government. That’s why only a small number of protesters marched to Kabul. We have been working on people’s mindsets and now the people have understood that [we] are really working for peace.”