Over 30,000 Palestinian citizens of Israel and their supporters demonstrated in Tel Aviv’s Rabin Square Saturday evening against the Jewish Nation-State Law. The protest, organized by the umbrella organization of Palestinian citizens in Israel, was one of several actions taken against the law, including petitions to the High Court of Justice as well as smaller demonstrations across the country. Saturday’s protest came a week after tens of thousands of Druze citizens came out to Rabin Square to protest the same law.

Although the protest was set to begin at 7:30 p.m., thousands had already converged on Rabin Square hours earlier. Hundreds of Muslim protesters also took part in a mass prayer prior to the beginning of the rally. Protesters flew both Israeli and Palestinian flags, despite an earlier controversy among activists around the presence of national symbols at the demonstration. Shortly after 8 p.m., the demonstrators began marching toward Tel Aviv Museum, while chanting slogans against racism and fascism in both Hebrew and Arabic.

Twenty-six political parties, movements, and civil society organizations, including the Association for Civil Rights in Israel, Peace Now, Sikkuy, Mossawa, and Amnesty International, called on the public to participate in the event. Hundreds of buses headed out from 70 different locations across the country, including from Druze and Bedouin villages. 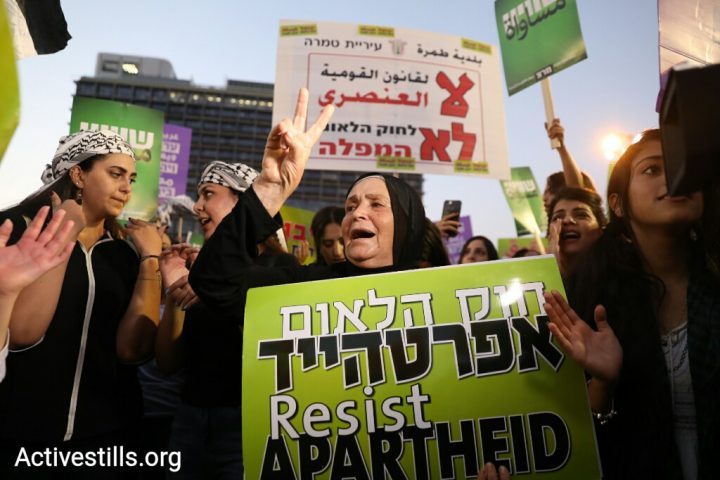 “Not all Arabs and Jews think the same. But all the Jews and Arabs here came out in droves to the square to wipe out the abomination and erase the stain of Netanyahu and his government’s Jewish Nation-State Law. We will also erase the stain that is his government,” Barakeh told the crowd.

“We are not going to rest after this incredible protest,” Barekeh continued. “We are marking the beginning of the way and there is no way back until the law is rescinded. Our struggle will be here, a popular parliamentary and democratic struggle for Arabs as well as Jews.”

“I came to France from Morocco when I was 10 years old,” Eva Illouz told the crowd. “Although I was Jewish and from Morocco, I went to the same schools as the French, and my teachers gave me grades just like the French. I felt that I wasn’t defined by my origin or religion. As a girl I felt deep in my bones the meaning of living in a country where I am treated as an equal.” 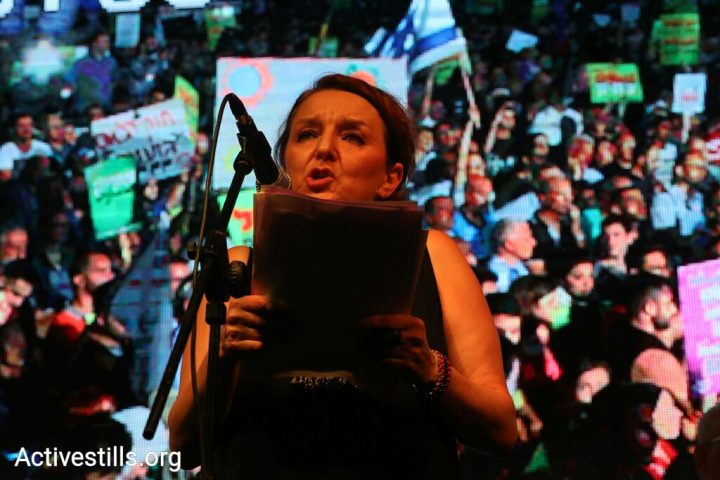 The head of the local Arab councils, Mazen Ghaneim, said, “If we are silent today, tomorrow it will hurt you. This is a law of racists that won’t stand. Bibi, what will you say about an Arab doctor who takes care of a Jewish patient? What will you say to an Arab midwife? To a police officer or a teacher in Nazareth?”

Following Ghaneim, Haaretz publisher Amos Schoken got up to speak. “Seventy years ago, Israel was established by a declaration that defined it as a Jewish state that will be open to Jewish immigration, that will foster the development of the country for its residents, and maintain full equality of civil and political rights for all its citizens irrespective of religion, race or gender.”

“There are deep disagreements about Israel’s identity and direction among those present tonight,” Schocken said. “But when a Basic Law harms the Palestinian minority in Israel, we must come together in order to ensure equal rights for all… the goal is clear: Palestinian citizens will be considered lesser.” 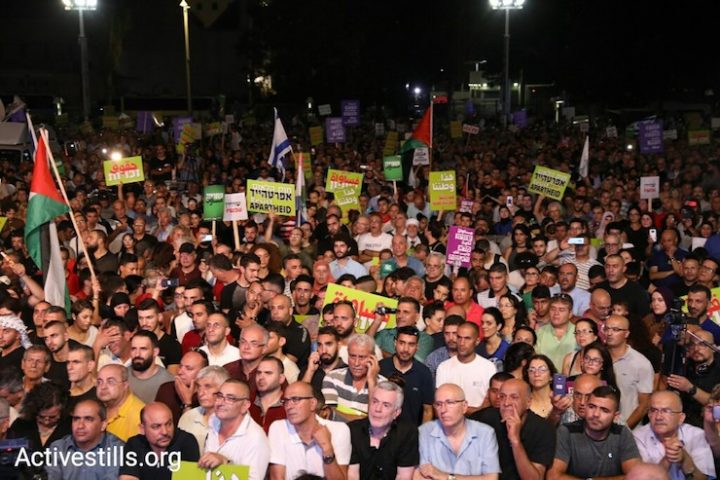 Tens of thousands of Palestinian citizens of Israel and their supporters protest in Rabin Square against the Jewish Nation-State Law, August 12, 2018. (Oren Ziv/Activestills.org)

Meron Rapoport contributed to this report.