“The Crooked Rigged System threw everything it could at Me. But I am the most successful baby at everything I do (unparalleled)—I told you I would fly and here I am!”

The Ego has landed” in the United Kingdom, and the Trump Baby has taken flight.

As U.S. President Donald Trump made clear just how offended and “unwelcome” the 20-foot-tall blimp depicting him as a frustrated, diapered infant grasping a cell phone made him feel upon arriving in Britain for his first official visit, demonstrators let the balloon fly in front of the Houses of Parliament Friday morning to kick off anti-Trump protests that are expected to be historic in size and enthusiasm.

Trump’s arrival in the U.K. was marked by the release of a wide-ranging and bizarre interview the president conducted earlier this week with the British tabloid The Sun, in which he went on a tirade against London Mayor Sadiq Khan that was “dripping in racism” and admitted that he was bothered by the mass demonstrations in London and throughout the U.K.

“I guess when they put out blimps to make me feel unwelcome, no reason for me to go to London, I used to love London as a city,” Trump told The Sun. “I haven’t been there in a long time. But when they make you feel unwelcome, why would I stay there?”

After calling Trump’s attack on him “preposterous,” London Mayor Sadiq Khan—who initially rejected organizers’ efforts to fly the Trump Baby blimp—explained why he ultimately decided to allow the balloon to fly over London.

“Can you imagine if we limited freedom of speech because somebody’s feelings might be hurt?” Khan said. 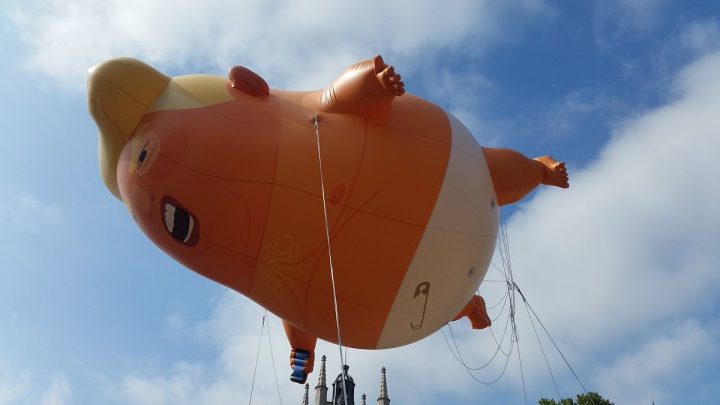