It was a Saturday afternoon, usually the busiest day of the week in Metro Manila. Streets were jammed as people went about their weekend activities and chores. Amidst the hustle and bustle, a motley group of people braved the traffic and converged in a humble center located in a quiet subdivision where The Peacemakers’ Circle was celebrating the UN World Interfaith Harmony Week.

Several women in Muslim garb. Hare Krishna, with their musical instruments. Catholic priests. Young teachers. Students… One of the directors of the Peacemakers Circle is Indian; another, a teacher who belongs to an indigenous tribe from the North. From Japan came the directors of Shumei Philippines, a Shinto inspired organization promoting natural agriculture. The group represented different faith traditions practiced in the Philippines— Buddhist, Hindu, Catholic, Muslim, Baha’i—and even from a non- denominational spiritual group, The Community for the Message of Silo. Together they shared a simple yet heartfelt afternoon, sharing with each other their chants and prayers, their faiths’ beliefs and insights, on the theme of Loving God, Loving One’s Neighbor.

“It is essential to resist forces of division that spread misunderstanding and mistrust especially among peoples of different religions. The fact is, humanity everywhere is bound together, not only by mutual interests, but by shared commandments to love God and neighbor; to love the good and the neighbor. This week, my delegation, with the support of our friends on every continent, will introduce a draft resolution for an annual World Interfaith Harmony Week. What we are proposing is a special week, during which the world’s people, in their own places of worship, could express the teachings of their own faith about tolerance, respect for the other and peace”

A month later, Prince Ghazi bin Muhammad of Jordan, Special Advisor and Personal Envoy to the King Abdullah II and author of the resolution, presented the proposal before the UN General Assembly in New York. The Resolution was adopted unanimously.

The World Interfaith Harmony Week is based on the pioneering work of The Common Word initiative which called for dialogue between Muslim and Christian leaders based on two common fundamental religious Commandments– Love of God, and Love of the Neighbor– without having to compromise any of their own religious beliefs. These two commandments are at the heart of the three monotheistic religions and can provide solid theological ground for dialogue. By extending it to ‘Love of the Good, and Love of the Neighbor’, this dialogue allows all people of goodwill, those of other faiths, and even those with no religious faith, to be included.

Since then, The World Interfaith Harmony Week has been celebrated during the first week of February by thousands of interfaith groups and other groups of goodwill in all parts of the world. These events are often not covered by the media and go unnoticed by the public. Nevertheless, the week gives the opportunity for diverse groups to become aware of each other’s efforts, to strengthen and inspire each other. The week-long celebrations can provide a powerful impetus of peace and harmony to their respective communities, recognizing that inter-religious dialogue and joint activities are important aspects in creating a culture of peace.

In the Philippines, the WIHW was celebrated by the CBCP-endorsed Uniharmony Partners Manila with various events and activities organized by different faith groups). This was coordinated by Fr. Carlos Reyes (Executive Secretary of the Episcopal Commission on Interreligious Dialogue of the Catholic Bishops Conference of the Philippines) and Pablito “Bong” Baybado (Religions for Peace, UST). The Peacemakers’ Circle, as a member of the UniHarmony Partners Manila, organized an interfaith dialogue afternoon to celebrate friendships and harmony among its members and partners.

Peacemakers’ Circle founder, Dr. Maritess Guingona-Africa, began the sharing with reflections on the teachings of her Catholic Faith, reading some verses from the Bible. Mahendra Das and his fellow Krishna practitioners from ISKON (International Society for Krishna Consciousness) explained the meaning of the Hare Krishna Chant and enlivened the event with chanting, complete with drumbeating and music. Different faith practitioners in the circle shared their reflections and gave an introduction of their faith’s beliefs on God and Neighbor– Dr. Genevieve Balance Kupang (indigenous faith tradition), Dr. Potre Dirampatan-Diampuan(Islam), Dr. Shakuntala Vaswani and Mahendra Das (Hinduism), Reimon Sonam Cosare (Buddhism), Rogel Silva (Baha’i), and Tomomi Shima (Shumei). 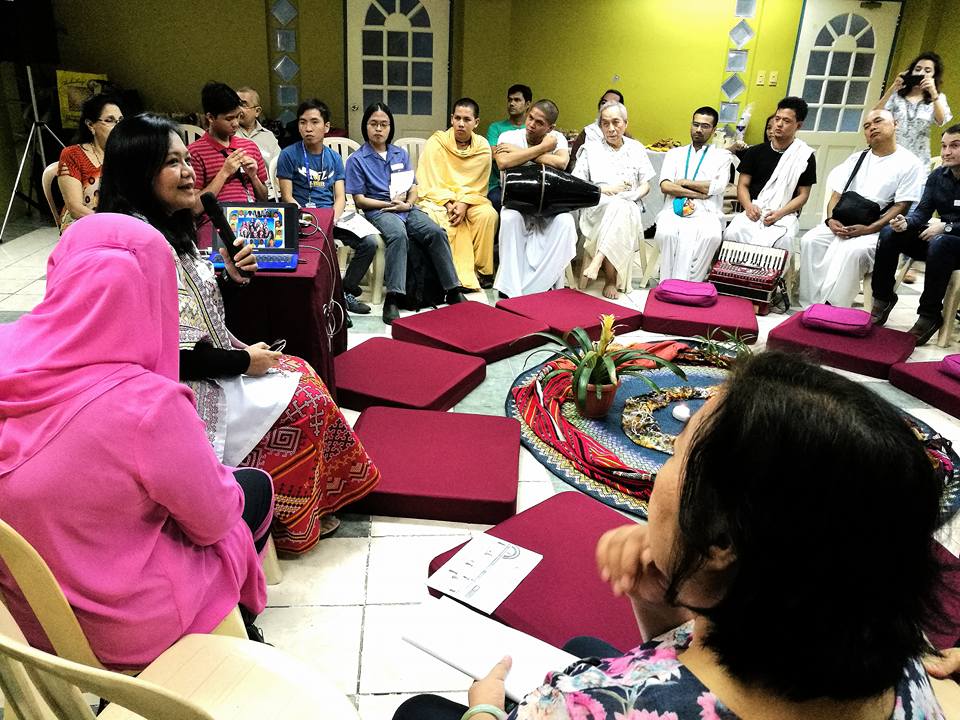 In today’s world where religious strife and tensions grow daily, dialogue and interfaith exchange can serve as a powerful antidote, a means by which different faith traditions can find points of convergence and a way forward towards a planetary civilization of peace and harmony. A common ground for peace-building is the Golden Rule of treating others as you would have them treat you. Expressed in different ways, the Golden Rule can be found in all faith traditions and can serve as a global ethic to build universal peace

Synthesizing the reflections shared within the circle, the following insights came forth. Love is the message of all religions. In love, fear has no place. Fear makes distinctions between the I and the You. But, in reality, we are all one and interconnected.

This interconnectedness can also be seen in the core belief of the Filipino value system, embodied in the word: “pakikipagkapwa” or “ kapwa”, a richly connotative Filipino word hard to translate directly but which is a worldview that sees the self in the other, a sentiment of shared identity and way of relating that doesn’t see oneself as separate from the other.

In the spirit of interchange generated within this Peacemakers’ Circle event, here are some verses from the Bodhicharyavatara (The Way of the Bodhisattva)—Shantideva, shared by Reimon Sonam Cosare:

Strive first to meditate
Upon the sameness of yourself and others
In joy and sorrow, all are equal.
Thus be a guardian of all, as yourself.

The hands and the limbs are many and distinct,
But all are one—one body to be kept and guarded.
Likewise, different beings in their joys and sorrows
Are, like me, all one in wanting happiness.

My pain does not in fact afflict
Or cause discomfort to another’s body
Through clinging to my I, this suffering is mine.
And being mine, is very hard to bear.

And other being’s pain
I do not feel, and yet
Because I take them from my own,
Their suffering is likewise hard to bear.

And therefore I’ll dispel the pain of others,
For it is simply pain, just like my own.
And others I will aid and benefit,
For they are living beings, just like me.

Since I and other beings both,
In wanting happiness are equal and alike,
What difference is there to distinguish us,
That I should strive to have my own bliss alone?

Since I and other beings both,
In fleeing suffering, are equal and alike,

What difference is there to distinguish us,
That I should save myself and not the other?

Note: The Peacemakers Circle is a non-stock, non-profit, non-partisan organization composed of people from diverse religions and cultures, different spiritual expressions, and indigenous traditions, working together for peace, guided by the principles of unity in diversity, goodwill, and cooperation. https://thepeacemakerscirclefdn.org/

As one of the organizations who supported the First World March for Peace and Non-violence in the Philippines, there has been interchange and support between the Peacemakers’ Circle and members of the Humanist Movement’s organisms and The Community for the Message of Silo.