Published by The Conversation

It appears that 2018 is already shaping up to be the year of women working together across race and class divides to fight back against sexism and sexual harassment. On the very first day of January, new movement Time’s Up was announced via an open letter from women working in the entertainment industry. While it could have just been a statement against the alleged sexual assault and harassment of those working in Hollywood, this was a message of solidarity to all “sisters”.

Some very powerful women in the entertainment industry created Time’s Up, but this is not about personal gain – they are using their status to help the disempowered. Time’s Up is all about high profile women using their privilege to highlight and counter sexual discrimination against all women in employment, whatever industry they are in.

The movement is the work of more than 300 female professionals from the fields of television, film and theatre, including producers, actresses, writers and directors. Just a selection of the starry names leading and contributing to the initiative are Emma Stone, Natalie Portman, Cate Blanchett, Ashley Judd, America Ferrera, Rashida Jones, Selena Gomez, Reese Witherspoon, Kerry Washington, Eva Longoria and Ellen Page, as well as Donna Langley, the chairwoman of Universal Pictures, and top lawyers Nina L. Shaw and Tina Tchen. As the days have gone on, more notable women have been publicly adding their names to the campaign and contributing to the fund, too, using the Twitter hashtag #TIMESUP. 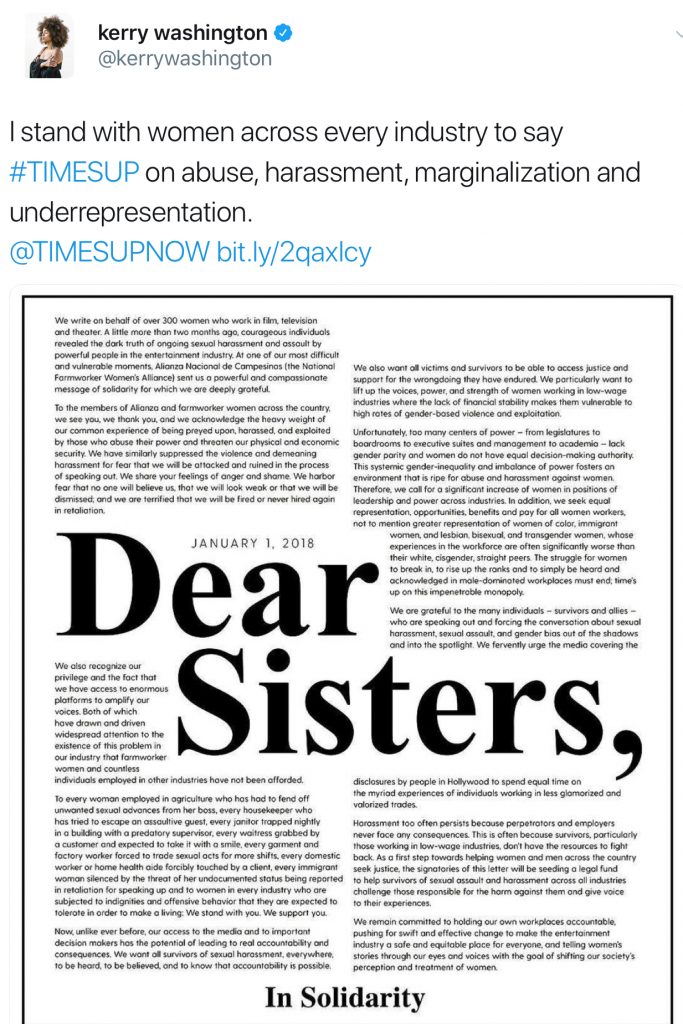 Hollywood’s feminists have previously been accused of representing an elitist group, who are far removed from the struggles of ordinary, less glamorous women. The Time’s Up movement is a serious attempt to counter these accusations through showing solidarity with working women of all backgrounds and ethnicities.

Their aim, is to raise $15m for a legal defense fund that can benefit low income victims of sexual misconduct. They also want to campaign for new legislation to protect women from harassment, and work towards gender parity at studios and talent agencies. A request has also been issued for celebrities to raise awareness by wearing black while walking the red carpet at the Golden Globe awards on January 7.

The campaign’s cross class solidarity was prompted by a letter of support from the predominantly Latina Alianza Nacional de Campesinas. This national female farm workers organisation wrote to the women of Hollywood who had spoken out against sexual abuse following allegations against Harvey Weinstein and others.

In a moving section of their letter, the farm workers wrote:

We do not work under bright stage lights or on the big screen. We work in the shadows of society in isolated fields and packinghouses that are out of sight and out of mind for most people in this country. Your job feeds souls, fills hearts and spreads joy. Our job nourishes the nation with the fruits, vegetables and other crops that we plant, pick and pack.

Even though we work in very different environments, we share a common experience of being preyed upon by individuals who have the power to hire, fire, blacklist and otherwise threaten our economic, physical and emotional security.
While the farm workers might be expected to level accusations of elitism against their wealthy sisters, they stood with them. Despite the enormous gulf in social and economic status, they offered their support – “Please know that you’re not alone. We believe and stand with you.”

This act of solidarity clearly touched the entertainment professionals who have, through the Time’s Up movement, taken the first concrete steps to support poor working women. The Time’s Up letter mirrors the language used by Alianza, while intiatives like the legal defence fund are a clear demonstration that this is more than just a PR exercise:

To the members of Alianza and farmworker women across the country, we see you, we thank you, and we acknowledge the heavy weight of our common experience of being preyed upon, harassed, and exploited by those who abuse their power and threaten our physical and economic security.
This collective action taken by so many women in the film, television and theatre industries is unprecedented. Using the celebrity status created by the very industry in which they have suffered might just be the best way to seek to protect all women from abuse, harassment and sexism​.