This morning, I woke up and found this lovely note from an old college friend on my Facebook page which, for some reason, touched my heart. 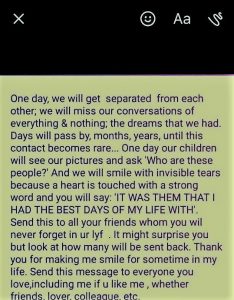 Sure, we receive notes and posts like these which at times may sound mushy and sentimental. But this rang true, coming from an artist friend I used to hang out with during those carefree university days. It was a gentler and more leisurely time in the Seventies when people would meet up at their favorite spot on campus to chill, talk about the one and a million things that were on their minds, swap stories and books, share music… doing those things that young people generally do. Communicating with others and finding a connection with the world at large meant stepping out, being actually and physically somewhere to get to know and experience things first hand. Technological marvels were something you just read in Sci-Fi books as fiction. Computers, Internet, Email, Facebook, Snapchat, Viber… all these advances in technology that we’ve come to take for granted in this day and age were still on the far horizon.

What his message said was true enough. After college, we lost touch just as we all lose touch with friends we once shared memorable moments together. We move on and friends too move on. Connections are lost or are far and few in between as life takes everyone on their own journeys. Careers, family, new interests, and preoccupations come in between.

Along the way, analog gives way to digital. Time and space are compressed as information, news, images, data from all corners of the globe comes streaming in in real time. A technological revolution has ushered in changes and at dizzying speed, among others is the rise and pervasiveness of social media. The debate goes on the positive and negative impact with the current contentious issue being the manipulation of social media for political and economic ends Fake news and disinformation, what they call the weaponization of digital media, is one of the pressing issues of the day, adding to the general confusion and disorientation people feel, as the diving line between what’s real and what’s digitally manipulated to look real becomes blurred.

Where before, people had to go out, touch, smell, look at or listen to the real thing, today’s digital natives just have to open their laptops or mobile phones and go online. The real is giving way to the virtual in more ways than one. Much to the horror of the older generation who see the demise of honest-to-goodness ways of doing things and communicating– physical, face to face, one on one, in a specific time and space. And yes, that reality has its good side too.

Social media does have its downside and ill effects on society. But just like any tool humankind has created, it depends on how we use it.

On the other side of the coin, social media has given everyone with access to the Internet a way to interconnect and communicate in ways not possible before. And what an explosion it has become. Who can deny the upside of the digital revolution, which, among other things, allows us to traverse time and space at the click of a button, to connect with others, instantly, wherever they may be. To express views and opinions freely. To share interesting titbits found here and there on the Internet. And yes, to re-establish ties with old, long-lost friends.

These days, as a digital migrant who has made the crossover to this “brave new world”, I, just like most people on this planet, now almost routinely check in on FB, Instagram and Twitter over a morning cup of coffee– to see what’s up with friends, to listen in on the social chatter and hear what’s on people’s minds. I browse or enjoy a good read shared by a friend while stuck in traffic. Google to find out something—a recipe, a factoid, a poem.

We post letters via email and share pictures through Flicker or Instagram. We send birthday greetings complete with emoticons and announce engagements, births, and deaths in the family on Facebook. We express scathing almost vitriolic reactions for or against what some politician or celebrity has said and done. Share jokes. Inspirational posts. Reflections on things and events. Memories. Imaginings. Thoughts… etcetera, etcetera, etcetera. Scrolling down one’s newsfeed, browsing through Instagram, going on Pinterest for some inspiration is a veritable human parade, a colorful kaleidoscope of bits and pieces that make up this weird yet wonderful thing we call life.

This morning’s post from a friendship rekindled made me reflect about the human impulse to connect with others and the general interconnectedness of life itself. (Of course, this is the same impulse that social media has capitalized on and with great success.)

For better or for worse, we can intuit that these developments brought about by technology are yet another means for the human consciousness to express itself, an interconnectedness and an intersubjectivity that can project itself, even beyond this physical space and time.