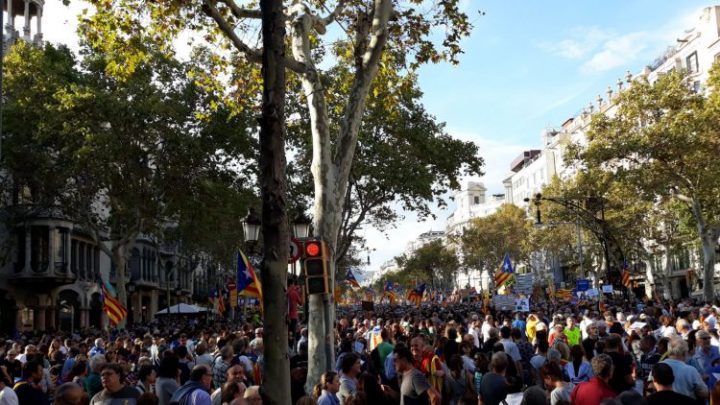 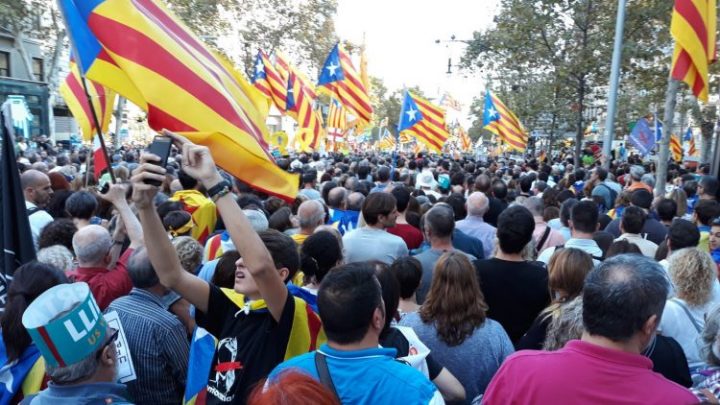 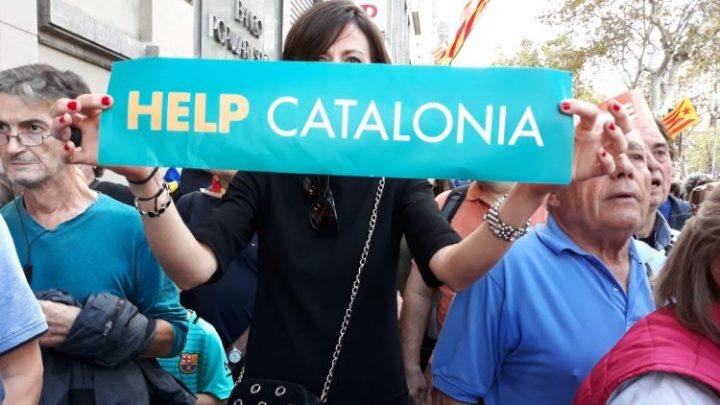 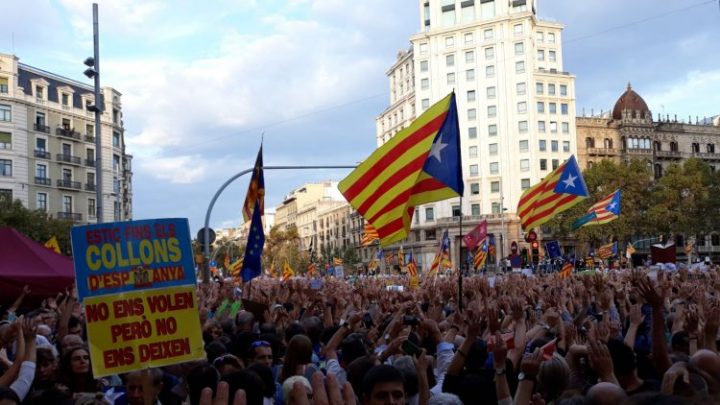 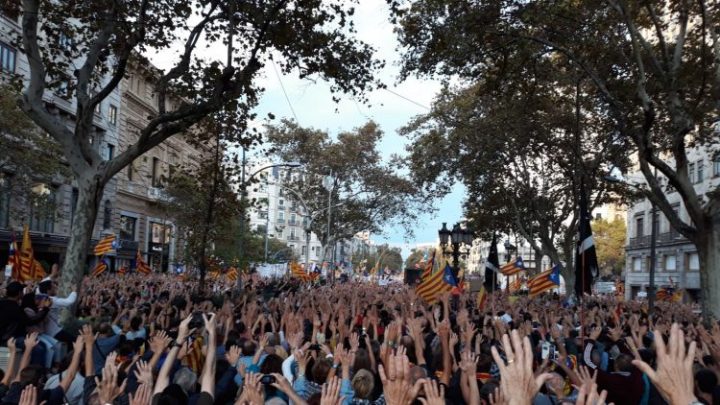 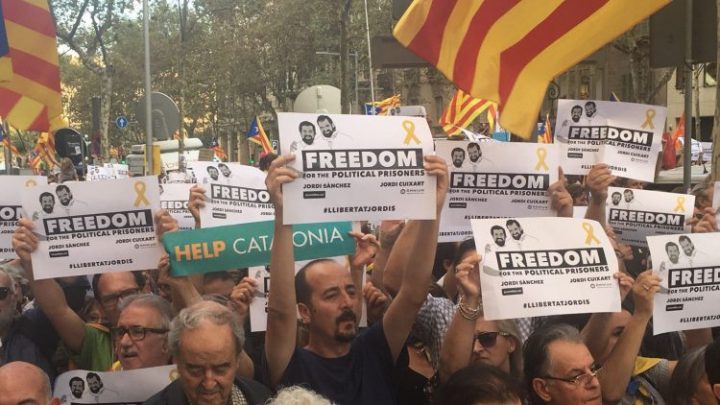 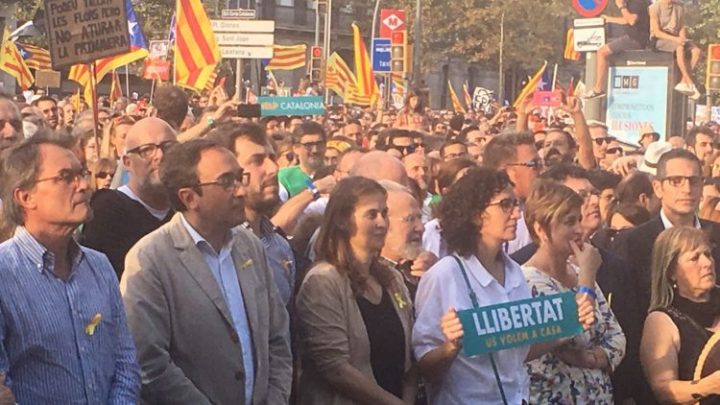 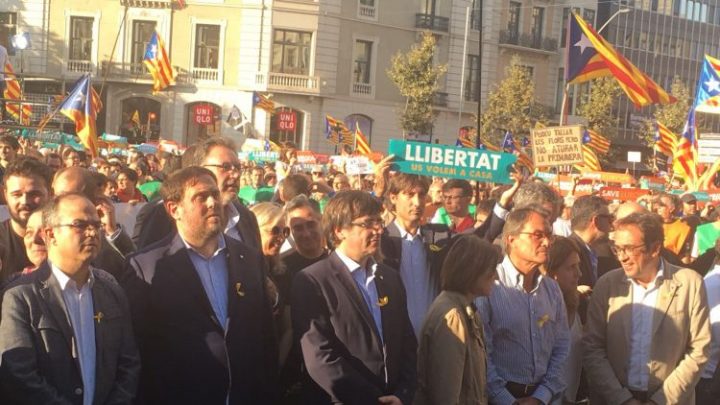 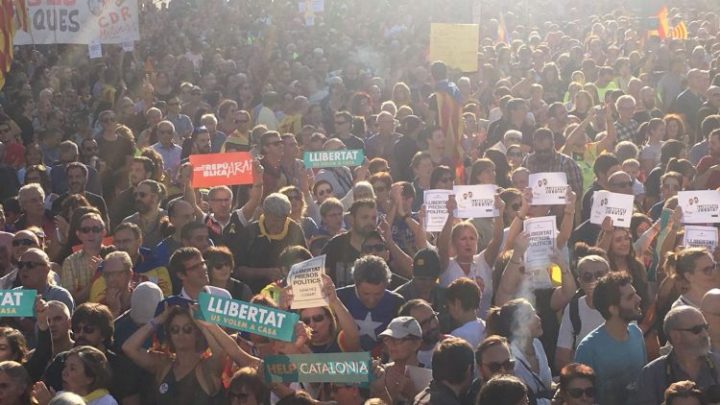 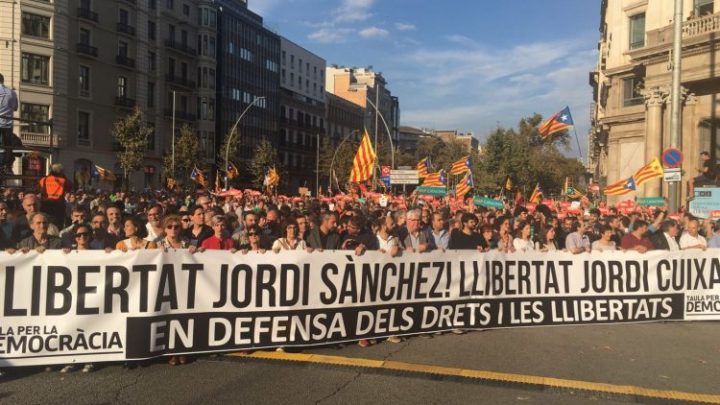 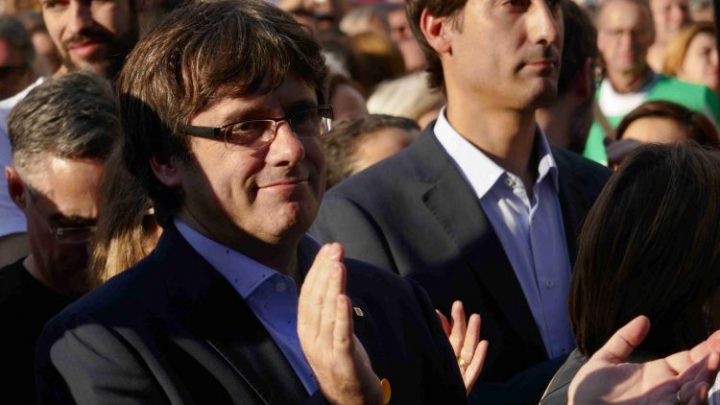 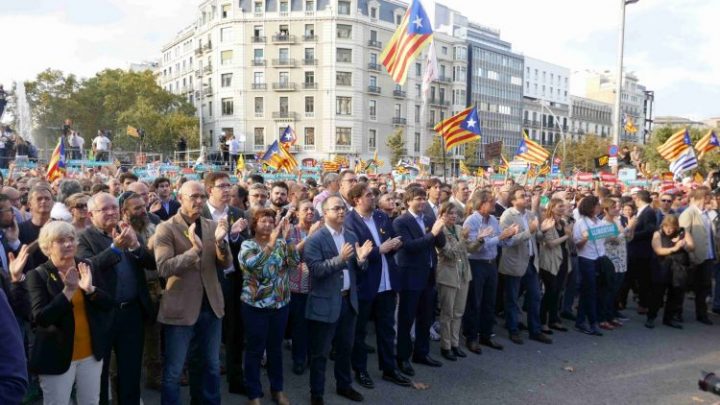 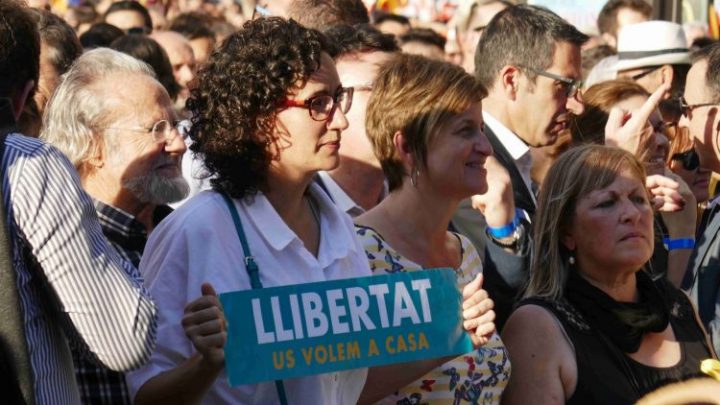 “The streets will always be ours”. This is the slogan that resonated on Paseo de Gracia [Barcelona] this afternoon, from the throats of hundreds of thousands of people who wanted to respond to the government in Madrid, which this morning announced that it will annul the self-government of Catalonia.

A multitudinous and civic response, democratic and peaceful. The anger of the people only showed when, from the air, the helicopter of the National Police Corps was approaching the demonstrators. The cries changed: “Out with the occupation forces.” It was a demonstration to demand the release of two individuals, Jordi Cuixart and Jordi Sanchez, imprisoned by an exceptional court, the Central Court of Instruction of the National Court, heirs of the infamous Public Order Court, which remained with the excuse of terrorism and is now used, without contemplation and without legal criteria, as a repressor of citizen movements.

How many were we? 500,000 people? 750,000 people? From the “Cinc d’Oros” to the Gran Via, Paseo de Gracia was an immense sea of ​​people. It was not a fluid manifestation. The crowded and tightly packed corners filled with people, grandchildren and grandparents, parents and children, baby strollers, handicapped chairs … everyone lifted their hands to the sky demanding freedom and demanding that Europe turn their eyes towards this city, Barcelona, to this country and to a government, the one in Madrid, which has lost its common sense in politics.

“What do these people who call at dawn want?” [original in Catalan] Sang Maria del Mar Bonet. For it seems that the same as when she composed the song: to trample without considerations the freedom of people.

When time passes and perhaps with the coldest perspective of a historian, we may look back and see what happened during this month of tension. The intense day of last September 20, with the searches to the Councils and the subsequent detentions collapsed Barcelona. It had never been so close to a citizen revolt since the Transition. It was a warning but someone ignored and again on October 1 will be recorded in our consciences, not as a party, but as a day of resistance to police assaults ordered by a government that did not intend to avoid a referendum, but to frighten the citizens. The general strike, two days later, filled the streets again. And in a very peculiar way since Spanish constitutional flags accompany señeras y esteladas [Catalonia’s National symbols]. We all want democracy and freedom.

Although on Oct 6th President Puigdemont, as he would later say in one of the letters to Rajoy, had not proclaimed the independence of Catalonia, the central government wanted to give it one more turn and a huge demonstration, the silent majority as the Popular Party government called it, filled Barcelona demanding the unity of Spain. And on October 12 it was tried again, but it failed, it just filled Plaza Cataluña and with the company of people as recommendable as the “Spanish Social Home” and “Platform for Catalonia.” And the icing on the cake, that everyone could see, was when the terrace of one of the most classic and central bars of the city, Zurich, was devastated by action of ultras groups, who fought each other, since despite their common right-wing ideology, they can not stand each other. Of course this did not appear in any Spanish media.

At the end of today’s demonstration, spontaneously people sang “Els Segadors”, the national anthem of Catalonia. “… How we make spikes of gold fall, when it suits us to reap chains …”. This is the official and modern version of the hymn. The original version, from the eighteenth century, has a second verse: “Now our king, our Lord declared war on us.” It refers to the War of the Reapers, in the Catalan Revolt of 1640 and to King Philip IV. Given that it was Philip lV that defeated the people on September 11, 1714, was it inevitable that Philip VI was to end the autonomy of Catalonia?

And what will happen now? The President of the Generalitat, Carles Puigdemont, announced this evening that he will convene the Catalan Parliament. In the face of this veritable coup d’état led by the decision of the Council of Ministers this morning, it is quite possible that the declaration of independence will be effectively proclaimed. It does not matter since President Rajoy’s use of Article 155 of the Constitution may be unconstitutional. The worst of all is that, in the face of a declaration of effective independence, the fire of this morning would be useless and they would apply the state of emergency of Article 116, which implies a total limitation of all fundamental rights.

Indeed, in spite of the crowd of people, two ambulances have been able to cross the multitude. I have not seen any other kind of incident. Only faces of people, indignant ones, excited others, but all confident and firm in the defence of freedom and democracy