I suppose the list is lengthy and includes dancing, comedy, karaoke singing, vodka drinking, monument building, diplomacy, novel writing, and thousands of other fields of human endeavor, in some of which Americans can teach Russians as well. But what I’m struck by at the moment in Russia is the skill of honest political self-reflection, as found in Germany, Japan, and many other nations to a great degree as well. I think the unexamined political life is not worth sustaining, but it is all we have back home in the not so united states.

Here, as a tourist in Moscow, not only friends and random people will point out the good and the bad, but hired tour guides will do the same.

“Here on the left is the parliament where they make all of those laws. We disagree with many of them, you know.”

“Here on your right is where they are building a 30-meter bronze wall for the victims of Stalin’s purges.”

Moscow has a museum devoted exclusively to the history of the gulags as well.

A tour guide in the shadow of the Kremlin points out to us the spot where a political opponent of Vladimir Putin was murdered, and goes on to lament the delays and failures of the justice system in pursuing the case. 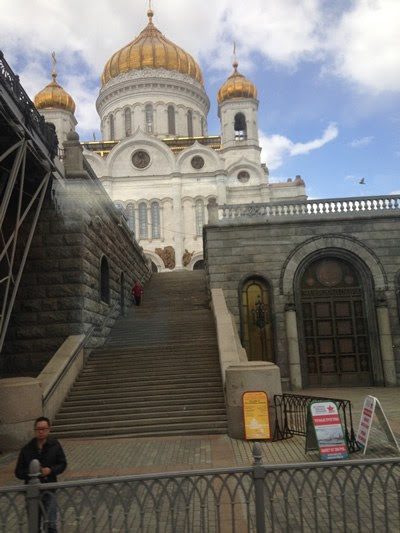 When told about Lenin’s mausoleum you are as likely as not to have him presented to you as a thug. Yeltsin is likely to be described as the guy who was too dimwitted to figure out a better approach to the parliament than shooting at it.

A great many sites are “glorious.” Others elicit different adjectives. “The hideous buildings on your left were put up in the time of ….”

It may be that the length and diversity of history here helps. Jesus stares across a square at Lenin’s grave. Soviet constructions are loved and hated, just like Soviet history. Across the street from our hotel, a huge park is left over from an exhibition of economic achievements put up in the 1930s. It still creates pride and optimism.

Back in Washington, D.C., a Native American Museum and an African American museum have joined the endless parade of war memorials and the museum about genocide in Germany — that committed by Nazis in camps, not by the U.S. bombs that still pose a danger to this day. But there is no slavery museum, no North American genocide museum, no McCarthyism museum, no crimes of the CIA museum, no museum recounting the horrors inflicted on Vietnam or Iraq or the Philippines. There’s a news museum that criticises news from anywhere other than U.S. news corporations. Even a proposal to include a little fact-based commentary alongside the display of an airplane that dropped nuclear bombs on cities created an uproar.

Can you imagine a bus tour in Washington D.C. with a guide remarking over a sound system: “To your left are the monuments glorifying the destruction of Korea and Vietnam, with the giant temples and phallic symbols for the slave owners behind there, and up that street there’s a tiny little memorial that promises not to lock up Japanese Americans again, but mostly it praises a war. Our next stop is the Watergate; who can name the band of crooks that got caught there sabotaging this so-called democracy?”

When we Americans hear Russians tell us that Trump is right to fire anyone for disloyalty, we find such notions backward and uncivilized (even as Trump proudly announces them to the world). No, no, we think, there should be no following of illegal orders or of orders opposed by the people. Oaths are sworn to the Constitution, not to the executive charged with carrying out the laws of the Congress. Of course we’re living in a dream world that exists only in elementary school text books and tour guides. But we’re also denying recognition of the rigidly imposed demand for loyalty to the United States, its flag, its wars, and its foundational mythologies. 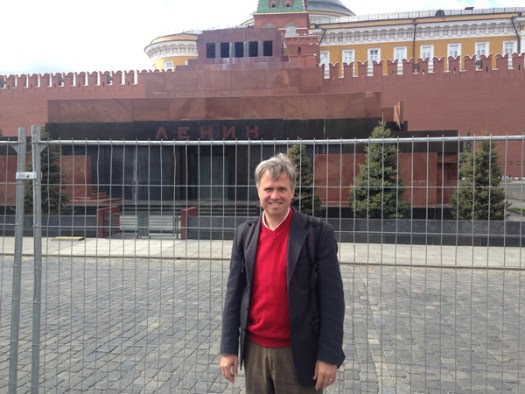 How many people did Stalin kill? A Russian can tell you an answer, even if it’s a range.

How many people has the U.S. military killed in recent wars? Most Americans are off by orders of magnitude. Not only that, but most Americans feel they are acting immorally in allowing the question into their brains at all.

In the end, both Russians and Americans allow love of their country to dominate. But one group does so in a more complex and informed way. Both are, of course, utterly and catastrophically misguided.

These two countries are leaders in the dealing of weapons to the world, with horrible bloody results. They are leaders in the development and holding of nuclear weapons, and in the proliferation of nuclear technologies. They are major producers of fossil fuels. Moscow has recovered from the economic destruction that the United States helped inflict on it in the 1990s, but done so in part by selling oil, gas, and weapons.

Of course, the U.S. leads the way in its own military spending and its consumption of fossil fuels. But what we need from the U.S. and Russia is leadership on disarmament and on transition to sustainable economies. Neither nation’s government seems particularly interested in the latter. And only the Russian government seems at all open to disarmament. This state of affairs is unsustainable. If the bombs don’t kill us, the environmental destruction will.

Muscovites are calling this current month “Maynovember” and proposing fur swimsuits. They’re used to warmth in May, not cold and snow. One hopes they are able to keep their sense of humor to the end.