In a sweeping move that follows a wave of divestment activism in Portland, Oregon, and across the country, the Portland City Council voted last week to pull all of the city’s investments in corporate bonds and securities.

The decision was a major victory for a broad coalition of activists who have pushed for the city to end its investments in corporations that have questionable records on the environment and human rights, including ties to the Dakota Access pipeline, the private prison industry and the Israeli occupation of Palestine.

“As their decision stands now, it’s permanent.… We can rest assured in Portland that our money won’t be funding prisons, pipelines and the occupation of Palestine,” said Amanda Aguilar Shank, an organizer with the racial justice group Enlace, in an interview with Truthout.

Portland’s City Council had originally considered adding Caterpillar, Wells Fargo, JP Morgan Chase and six other companies identified by a volunteer committee on socially responsible investing to a so-called “Do Not Buy” list, but the council was unable to come to an agreement on which companies to blacklist from the city’s investment portfolio. Instead, in December, they voted to place a temporary halt on all new corporate investments until permanent decisions could be made.

Hyung Nam, a Portland public school teacher and former member of the Socially Responsible Investments Committee (SRIC) behind the proposed “Do Not Buy” list, said the vote was a victory for “human rights and climate justice.” 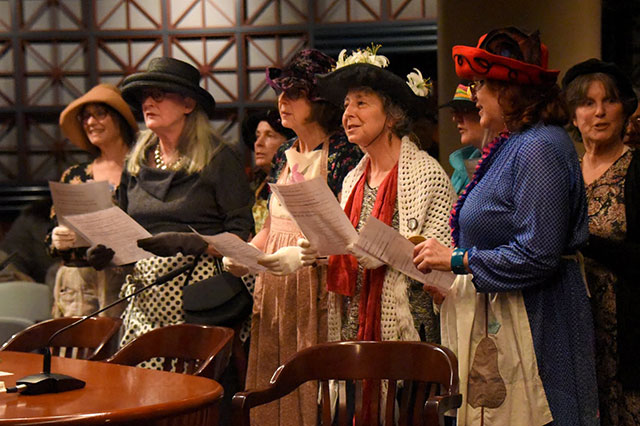 About a third of Portland’s $1.7 billion investment portfolio rests in corporate bonds and securities, including with Wells Fargo and Caterpillar, two companies currently targeted by divestment activists nationwide, according to reports. Portland will let its corporate bonds expire over the next three years instead of returning to haggle over a “Do Not Buy” list every time the city undertakes annual, state-mandated reviews of its investment policy.

Shank said Enlace and its allies started the divestment push in Portland four years ago with a focus on Wells Fargo, which finances major private prison companies that build and maintain prisons and immigration jails. Mass incarceration has taken a heavy toll on communities of color, making companies who profit from it targets for immigrants’ rights and racial justice groups.

The campaign in Portland against Wells Fargo gained momentum last September after a scandal erupted over 2 million unauthorized customer accounts created by employees under intense pressure to meet unrealistic sales goals. The scandal and resulting investigations prompted several major cities to stop doing business with bank, while Seattle made its decision to divest from Wells Fargo in part to protest the Dakota Access pipeline.

In addition to immigrants’ rights and racial justice activists, opponents of the Israeli occupation of Palestine were also pushing for divestment. Local inter-faith anti-occupation groups wanted the city to divest from Caterpillar for providing armored bulldozers used by the Israeli military. In its main report to the council, SRIC found that Caterpillar’s bulldozers were used to carry out violations of United Nations agreements “involving attacks on civilians.”

Then the resistance at Standing Rock to the Dakota Access pipeline captured the world’s attention and prompted international calls for divestment from banks financing the pipeline — including JP Morgan Chase and Wells Fargo. Activists also discovered that Caterpillar had contracted to help build the pipeline as well as President Trump’s proposed wall on the southern border.

Soon, Native activists were returning to Portland from the protest camps in North Dakota and joining local divestment campaigners in their effort to pull taxpayer dollars from the city’s investments in Wells Fargo, Caterpillar and other companies. It was this broad coalition of intersecting causes that finally pressured Portland to abandon corporate investments altogether.

“It became such a multi-issue push, with so many reasons to divest from every corporation,” Shank said.

Solidarity and Tenacity Pay Off

The council agreed to end corporate investments on a narrow 3-2 vote, rejecting a compromise proposal put forward by the city’s mayor, Ted Wheeler, that activists said lacked teeth and transparency. At least one member of the council indicated that he supported ending all corporate investments because the divestment issue — and the determined activists behind it — took up too much of the council’s time and needed to be resolved once and for all.

“To be honest, what it shows is that we moved them,” Shank said. “They did not want to do this, and we made it impossible for them not to do it.”

Top city officials were resistant to the idea of divestment. Along with City Treasurer Jennifer Cooperman, Wheeler warned that the city could lose around $4.5 million in revenue over the next year by switching from corporate bonds to lower-performing bonds, according to local reports. That money could be used for affordable housing and other initiatives, the mayor said.

Mayor Wheeler also suggested that instead of divesting from companies, the city could have a bigger impact on corporate behavior as an investor. Other critics pointed out that divestment has a much stronger impact in the media when cities single out a bad actor for a specific issue, as several cities did last year with Wells Fargo after the false accounts scandal.

However, Shank said Portland’s decision shows the power of coalition building in the Trump era and presents a challenge to the entire system, instead of just one corporation or another. “I also feel like the way that, as a movement, we’ve come together to target the concept of making profit off of corporations: It challenges capitalism, it challenges the way our economy is working,” Shank said. “And I am very proud to be part of that challenge at a time when we are up against an ideology, you know, the Trump ideology, that says the government should serve corporations.”

As for the prospect of losing revenue due to divestment, Shank said Portland’s City Council is already considering a proposal to create a municipal bank that would allow the city to reinvest locally and with increased input from residents, instead of seeking returns from corporations that may actually be causing harm to Portland’s communities in the long run.

Shank added that activists in other cities should take note of the victory in Portland, which does not always live up to its progressive reputation, especially when it comes to issues such as police violence that have particular impacts on people of color. The divestment campaigns in Portland won because they chose to organize together along intersectional lines.

“What we need to be doing now is something that is broader and bolder and puts forward another vision of how our cities can function,” Shank said.