The Bayerische Landesbank (BayernLB) was one of 17 banks to have invested in the Dakota Access Pipeline. The highly controversial pipeline, which is destined to transport oil obtained by fracking across the North American continent is a threat to the environment and drinking water supplies and would also desecrate ancestral burial grounds of the Sioux who live there. The ruthless manner in which authorities and security forces have suppressed the nonviolent resistance to the pipeline has raised protests worldwide.

Towards the end of last year the water protectors of Standing Rock launched the “Defund DAPL” campaign, as a result of which some big investors have already pulled out of the project. Now BayernLB is to follow. On 23rd February, BayernLB’s Johannes Jörg Riegler had to answer to the Bavarian parliament during a hearing behind closed doors. According to media reports he was not prepared to comment afterwards but distributed a paper instead that states BayernLB’s intention to divest.

BayernLB has invested 120,000 dollars into the pipeline project. 75% of the bank is owned by the Bavarian state, 25% belongs to the Sparkassen, the municipal savings banks in Bavaria. Although now suddenly politicians of all persuasions show themselves concerned about the effects of the pipeline, it is clear that it was the public pressure created by civil society which has led to the bank’s decision. Apart from several media articles there has been huge engagement in social networks, two petitions, a big advertisement in Munich’s newspaper Süddeutsche Zeitung (see picure below) paid for by donations as well as a protest organised by the three NGOs Fossil Free Germany, Campact! and Urgewald e.V. which took place in front of the bank’s headquarters in Munich and which also saw television cameras present.

The other German Bank still involved in the project is Deutsche Bank, one of Germany’s biggest private banks. The petition addressed to Deutsche Bank, which has been set up by SumOfUs – People before Profit, is continuing to collect signatures.

A petition in English language addressed to all banks involved can be found here: http://petitions.signforgood.com/NoDAPLbanks?code=IEN 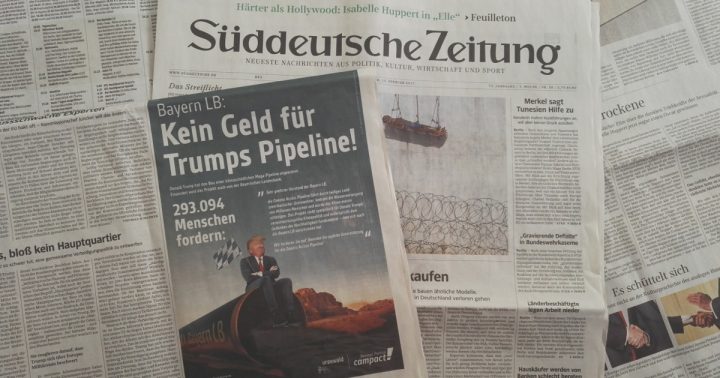