“The Conference, while welcoming achievements in bilateral and unilateral reductions by some nuclear-weapon States, notes with concern that the total estimated number of nuclear weapons deployed and stockpiled still amounts to several thousands. The Conference expresses its deep concern at the continued risk for humanity represented by the possibility that these weapons could be used and the catastrophic humanitarian consequences that would result from the use of nuclear weapons” (emphasis added).

So said the 2010 UN conference to review progress of the nuclear Non-Proliferation Treaty (NPT) after a turbulent 4 weeks in which several delegations walked out when the Iranian president got up to speak at the start of the conference, and the Iranians had to then delay agreement of the consensus document at the end of the conference in order to seek advice from Tehran because they never thought the USA would agree to calls for a conference to establish a zone free of nuclear weapons in the Middle East.

Nevertheless, the 2010 consensus document was accepted by all countries except the 4 nuclear-weapon-bearing countries that aren’t signatories to the NPT and weren’t there (India, Pakistan, Israel and North Korea) and so a new impulse was unleashed to drive forward civil-society organisations and countries anxious to disarm the planet, in the same way that efforts to ban landmines and cluster weapons were able to focus on their effects on human beings and not on geopolitical and business interests of weapons sellers and manufacturers.

A series of conferences to analyse these humanitarian consequences was held in Norway, Mexico and Austria in 2012 and 2013, in which we learnt that 100 bombs dropped on cities would effectively wipe out human civilisation as we know it today, and Austria launched a pledge in the final meeting in Vienna, subsequently known as the Humanitarian Pledge which included a call…

“…on all states parties to the NPT to renew their commitment to the urgent and full implementation of existing obligations under Article VI, and to this end, to identify and pursue effective measures to fill the legal gap for the prohibition and elimination of nuclear weapons and we pledge to cooperate with all stakeholders to achieve this goal” (emphasis added)

In 2014, support for the pledge grew, it was turned into the form of a resolution at the UN General Assembly and received the support of 127 countries. In 2015, the NPT failed to make any progress on nuclear disarmament at all and a consensus document couldn’t be agreed upon even when non-nuclear-weapons states allowed all strong language in favour of progress to be removed. But what was seen to be a failure as some was taken as an opportunity by those nations supporting the humanitarian initiative and new resolutions were taken to the UN General Assembly; firstly in 2015 to convene an Open-Ended Working Group (OEWG) to examine effective measures for nuclear disarmament which recommended advancing with a ban-treaty; and secondly in 2016 to convene talks in 2017 to act on the OEWG recommendation for a treaty effectively prohibiting nuclear weapons. This latter resolution L.41 of 2016 was passed with the overwhelming support of 123 countries.

And here we are!

Talks start on the 27th of March, 2017 in New York and anti-nuclear civil society organisations and countries supporting a ban treaty can barely contain their excitement that a substantive step in fulfilling NPT article VI commitments to nuclear disarmament is going to take place for the first time since the Comprehensive Nuclear-Test-Ban Treaty was opened for signing in 1996 (it still hasn’t come into force because eight countries refuse to sign it: China, Egypt, India, Iran, Israel, North Korea, Pakistan, United States).

No one expects the USA, Russia, France and the UK to take part in the talks, but China looks like it will. No one expects even one nuclear weapon to be dismantled following this treaty either.

Nevertheless, it is an important step on the path to NPT compliance and a legal norm will be established, nuclear weapons will be legally banned, their possession will be stigmatised, doing business with companies involved in the supply-chain of nuclear weapons will be very controversial in the eyes of the public, and civil society organisations will have new weapons with which to sensitise the public through divestment campaigns about the devastating effects of a nuclear war and the increasing imperative to get rid of them once and for all.

And this is what the USA, Russia, France and the UK fear the most: negative public opinion towards nuclear weapons, because it is only internal domestic pressure that will create the conditions for nuclear disarmament.

Talks convene for a week in March and for two further weeks in July.

Pressenza and our network of friends in the International Campaign to Abolish Nuclear Weapons will be there to bring our readers all the latest news, developments and stimulating opinions on everything to do with this historic moment on the road to nuclear disarmament. 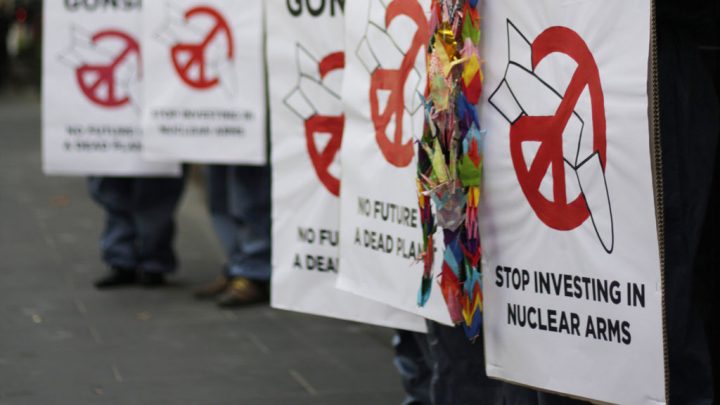