The Civil March for Aleppo is a civil movement that goes all the way through Europe, along the refugee trail, heading for Syria. It is a solidarity initiative that at the same time encourages the participants to become active for refugees, for peace and for civil society in Syria.

Since the beginning of february the civil march has been in Austria and already passed through Lower Austria on foot. On the 7th of February the marchers arrived in Vienna. More than 1500 people already took part on the route from Berlin to Vienna.

Interview with Anna Alboth, initiator of the march:

How are you after these 45 days?

I am happy that we managed those 45 days. When we started I was afraid that the people would be fed up after some time and that the team would fall apart. There were so many challenges and we didn’t know how many more problems were going to come. If we had known before maybe we wouldn’t have started the march. There are logistical problems like the weather. During the march some people became sick. There was also much criticism by people who were against the march and tried to boycott  it.

Different information was spread, for example that I paid the people to march with us. That is very painful for me. Physically I have a lot of power and I believe that this march makes a lot of sense. However when you arrive in the evening tired from walking and then start your computer and you are confronted with this “online war”…I often cried.

Physically I am okay, and mentally…. Each one of us had their moments of exhaustion. But I feel deeply connected with the people.

Every two or three days we meet Syrian people, there is a lot of communication and exchange between the marchers, the Syrians and other people who we meet. What I wouldn’t have expected is that the people who participated in the march would go home and start projects there. Deep inside I feel that this march makes a lot of sense and that it is good what we do. But I did not expect these rapid effects.

What will happen when you reach the Syrian border?

For the moment it is impossible to pass the Syrian border. If we arrive at the border tomorrow it would be impossible to enter Syria. And this is exactly the problem. It should be possible for people to enter Syria. And it should also be possible to reach the cities. The situation has changed since we started to plan the march. Many people asked us if we knew that the situation in Aleppo has changed. I said, yes, I am in contact with people. But I think after all these years of war it is important and we cannot just forget it. That’s why the name of the march is “Civil March for Aleppo” and not “Civil March to Aleppo”.

And even when there is peace, happiness and democracy and everything that we wish for, there is still a lot to do. Like after every war for many years. And I wish that the eyes of the world would be directed there and that people don’t forget. And of course, in my most beautiful imagination, we will arrive and we will risk nobody’s life to come to Syria. And maybe I will hug everybody who I meet there.

Which other experiences do you want to share with us?

We started the march with about 500 people. Ten people have done the march the whole way since its start. There is a permanent fluctuation of participants. Until now 1500 people have joined. Sometimes we are 20, and sometimes 200. Some people walk for one day, some for one week. It is amazing that there is a rotation and also very diverse because the group mixes anew every day. There is no chance for a group dynamic to develop. In general for the project this is difficult.

We need a balance between serious things, e.g. events, discussions in the evening or we watch a movie and discuss afterwards. We want to educate ourselves. But then we also need some fun because we are nonstop together with a group of people. We sleep at the same place, we go 30 km, sometimes the temperature is at -16°C. The people need some rest, otherwise they become crazy.

I have no experience to organise something. Therefore we have made a lot of mistakes. I have the feeling that the Civil March is a long process of learning, an apprenticeship in politics, expression and how to discuss without fighting. And all the logisitical issues, how to organise a breakfast and how to cook for 200 people. I did not know that but now I know. 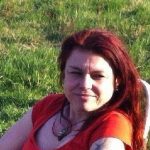 Sabine Schmitz
Was born in 1968, lives in Vienna, and has been active in humanist projects in Germany, Africa and Austria since 1990.