In the midst of winter, I found there was, within me, an invincible summer. And that makes me happy. For it says that no matter how hard the world pushes against me, within me, there’s something stronger – something better, pushing right back.
— Albert Camus

By Srećko Horvat for DiEM25 Newsletter

The season is nearly over, but that doesn’t mean DiEM25 hasn’t been active during this summer’s hot days. On the contrary…

Besides working on creating a network of “Rebel Cities” from Barcelona to Naples, it seems spontaneously DiEM25 started to create a network of “Rebel Islands”, from Aegina (Greece) to Vis (Croatia). Already during the dark times of 1930s, these islands were spaces and symbols of resistance.

Thanks to the DSC (DiEM25 Spontaneous Collective) in Aegina, who first met on May 4 and appears to have more than 50 members at their regular meetings, DiEM25 held a wonderful evening debate with messages from France, Germany, Italy, Spain and Croatia. 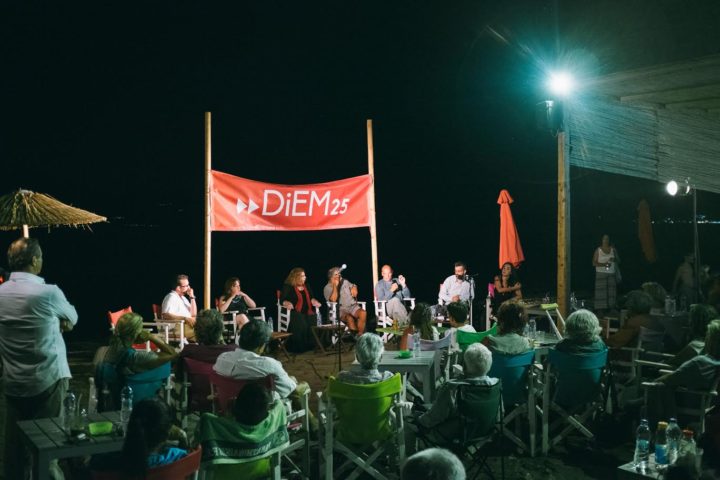 Among the speakers were Yanis Varoufakis, Judith Meyer, Sandro Mezzadra, Cristina Soler-Savini, Luis Martín, Lorenzo Marsili, myself and many others.

Although German, Judith Meyer explained in fluent Greek the reasons why she joined DiEM25. Before joining DiEM25 in February 2016, Judith followed the Greek situation closely and tried to understand and change the perception of Greece in German media. After the July referendum last year, she explained, her “European dream had been demolished. In my depression, I wrote an email to Mr. Varoufakis on July 14, in order to thank him for having shown us the true face of the European Union.”

Yanis didn’t know her, so she didn’t expect a reply. But she got one: “Thanks Judith. We need to remain pro-European and criticise actively those who have usurped Europe.”

The rest is history. Only several months later DiEM25 was launched in Berlin’s Volksbühne where Judith, Yanis and many others began to work on a real alternative for today’s collapsing Europe.

Luis Martín then conveyed two messages from Spain: “Warmest greetings from DiEM25’s members in Spain – from the men who, like you, have joined our struggle. I also wish to convey our gratitude for your courage; because it takes courage to join and take a step forward. Your courage inspires us all.”

Martín underlined how DiEM25 members across Spain are gathering and actively getting involved in the creating of DSCs from coast to coast, from his homeland in the island of Gran Canaria to Madrid and Galicia. “They gather on their own, spontaneously,” he said. “In some cities, like in Barcelona, they are energised by DiEM25’s close friends, like Ada Colau’s En Comú Podemos, one of Europe’s “rebel cities” leading the municipalist democratising forces.”

A political scientist and journalist, Martín joined DiEM25 during its founding days in Berlin back in February, and currently works on the movement’s communications and organisational tasks.

DiEM25’s French DSCs were also present in Aegina, with Cristina Soler-Savini. On one hand she drew alarming conclusions about the current situation in Europe, saying that “Greece is only the first destination of austerity experiments by the Troika” and that soon France will be targeted too. As if this were not enough, she added, “the French government carries out its duties in an extremely violent manner. Hollande has invented the ‘pessimism of the will.’”

But one can feel a glimmer of hope. Cristina mentioned the innovations in movements rising against the Labour Act and the French government. Nuit Debout has brought the concept of the ancient Greek ‘agora’ to France, she said, adding: “The traditional forms of struggle are backed by direct communication between citizens, in innumerable agorae and through social media.” For her, DiEM25 must be the platform that federates and never gives up: we will win the fight, she said, because we embody the “optimism of the will”.

Sandro Mezzadra, philosopher and political theorist from Italy, said it was vital not to label the movements against austerity in Europe since 2010-2011 (from Greece to Spain) as ‘failures’: “They have produced solidarity and changes at the level of everyday life; they have transformed the political agenda in Europe”, said Sandro.

“Nevertheless,” he said, “they have not been able to win at the general political level.” This is because, he argued, these movements have been ‘contained’ and limited within the boundaries of the nation state. “It is not possible to politically win, to produce a radical transformation in the sense of freedom and equality in Europe, within these borders. It is to tackle this question – the most important political question of this age in this part of the world – that DiEM25 was founded as a transnational and pan-European movement.” He added: “The task [we are] confronted with is not easy. In a way it is unprecedented. What is needed is a radical political invention. DiEM25 is an attempt to contribute to this invention. We are living in extraordinary times; ‘business as usual’ doesn’t work.”

As the summer turns into a new beginning, with many more DiEM25 actions to come all over Europe, after the Aegina event DiEM25 switched its focus to another island and was present at the Green Academy in Vis, Croatia, to strengthen ties with our Green comrades and discuss climate change, de-growth and the urgent need for new internationalism.

One of the speakers at the Green Academy, Lorenzo Marsili, co-founder of European Alternatives and one of DiEM25’s initiators, concluded that we could speak about “The resilience of the octopus. A year ago in Greece they cut one of our legs. Today it’s grown stronger, with DiEM25.”

Europe’s disintegration has accelerated further this year, but as Albert Camus would say describing the ‘invincible summer’: there’s something stronger, something better, pushing right back!

That something is the Democracy in Europe Movement, DiEM25.