Chilean student protests against their own educational system seem to last forever. Almost exactly five years after the most intense demonstrations since the end of Pinochet-Dictatorship, violence is capturing the streets of Santiago de Chile again. A day report.

The sun lights bright at the 4th of august. Approximately seven thousand students gather at Plaza Italia in the center of Santiago. Like any demonstration before, the “Marcha de la Educación” takes place on a Thursday. The students appear focused and resolved. It seems that they know what to estimate. Thousands of students and pupils are preparing themselves. Finally, the movement starts.

At the same time, about four metro stations later, the musicians of Ywana are preparing themselves as well. Like always before a gig, the atmosphere is easygoing and concentrated. Ywana is a “Nueva Cumbia” – Band, sometimes performing at social events. Because of this they weren’t hesitating when Confech, the Confederation of Chilean Students, spontaneously invited them to play live on stage at the final destination of the manifestation near Plaza República.

The stage is ready for the “celebration of education”. As the demonstration gets closer, people are bustling, nevertheless in a relaxed atmosphere. The soundcheck fades away when the frontrunners of the demonstration arrive, entering the stage: “don’t exclude yourself”, Daphne Concha says, president of Corpade.

One can hear screaming, singing and sirens. Anything that is happening, happens quite fast. The Confech, Corpade and other representatives basically formulate the requests: mobilize, fight and especially don’t repeat the mistakes of the predecessors. The speeches address unity, while a growing mass of students is listening. They all share the exorbitant costs of education in Chile. They all share the disadvantages of the teaching procedure. They all share the vibe of the situation, as it gets more hectic around the stage.

The political speeches are over and that’s basically why everyone is here: they need a change. But there is also another thing they all share: they all desire to dance. To foot away the oppressive behavior of the responsible politicians, to rave away the liabilities of a restrictive educational system. To leave behind the violent incidents and just acclaim the moment. The artists of Ywana therefore just deliver the right vibrations in the right moment.

It seems like the eye of the storm, as the stage is surrounded by hundreds of carabineros which are chasing students, throwing water and teargas, whereas students are throwing back stones and other objects. Motorcycles, armored cars, running masses, press which tries to take the perfect shot. And in the middle of it, marked of by a little fence, the stage. A cultural event, authorized by the municipal administration, where technicians, musicians, and other artists do their work peacefully.

Armored with rapid drums, accordion, bass, keyboard, drum kit, guitar, trumpet and an intense voice the event turns into a little island, where the beach sometimes gets flooded by the rough sea but the scenario basically comes down to a harmonious being. Surely, Ywana is a “band from and for the streets” which identifies with the protest, but does that legitimate throwing teargas in front of the stage and in the middle of a dancing crowd?

Nevertheless, the concert continues while the crowd has to move back due to more and more teargas bombs. Eventually five to six gas bombs are too much. People are trying to escape the foggy place, but the gas is suddenly everywhere. One can’t see anything, nor breathe. Everywhere people cough, blindly searching for water, stumbling around within the fence. It takes about two minutes till the dense smoke disappears. Two minutes of stinging particles scratching one’s lung, acid-treating one’s nose and the painful threat of suffocation.

It was supposed to be an “answer to students’ violence”, the police reclaimed afterwards. Which violence? The violence of euphoric music? The violence of young people dancing? And what is with the violence to one’s body? The psychological violence a person faces after experiencing how it feels to lose the ability to control their body? When the teargas itself forces one to breathe in more and more of its toxic steam. It is unavoidable to call off the concert at this moment.

The gas goes away. Ambulance men are providing the victims of the attack with water. Faces are white and covered with salty deposits. “We tried to play as long as possible”, the members of Ywana say. The band reunites behind the stage: “we will not be intimidated”, they proclaim. A familiar expression, hearable also by officials of the students` movement.

In the whole city of Santiago there where about 40.000 demonstrators in the streets. All over Chile even more students marched; they are marching for several years now. No matter what happens, they will continue fighting for and demanding a better educational system.

Together, they learned to dance within the violence. 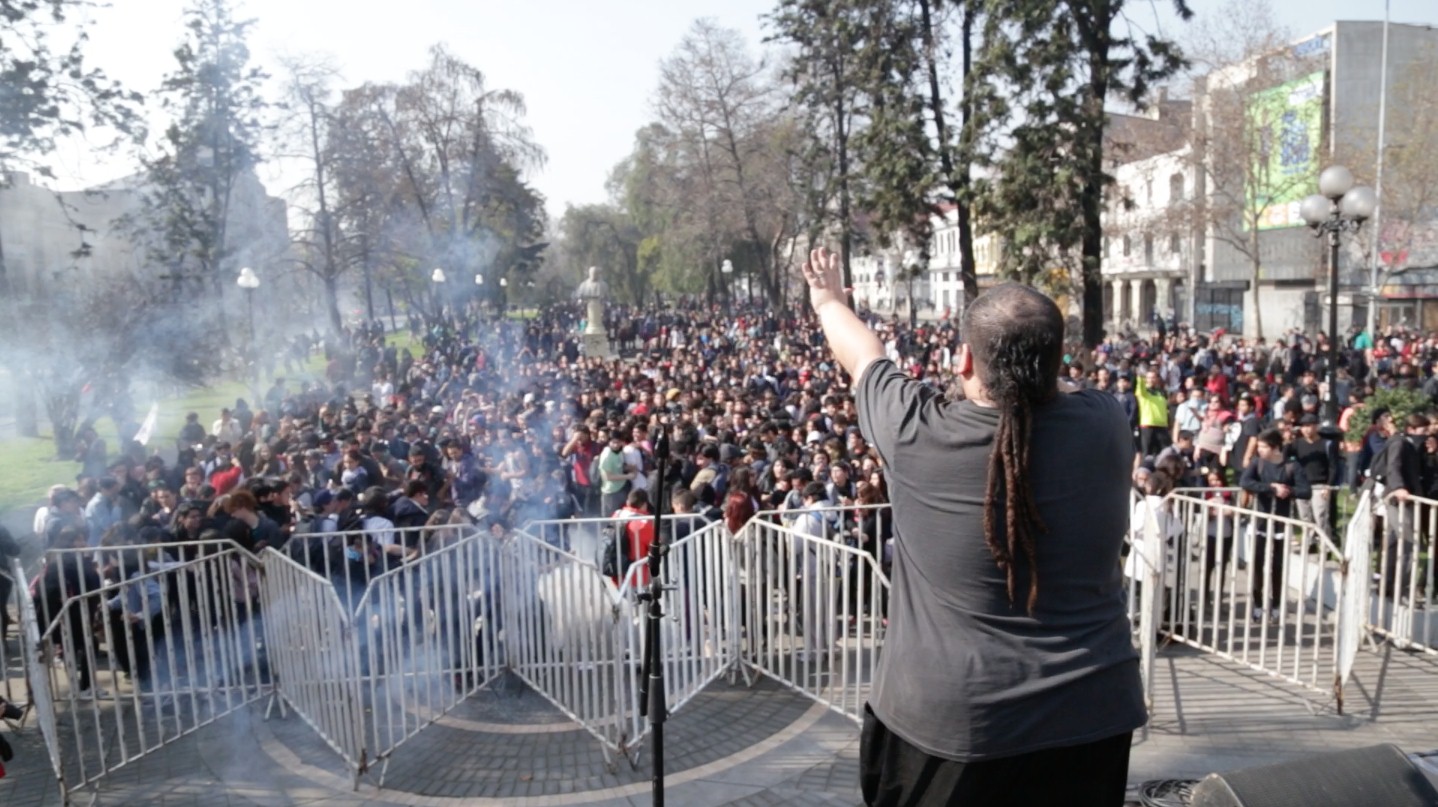 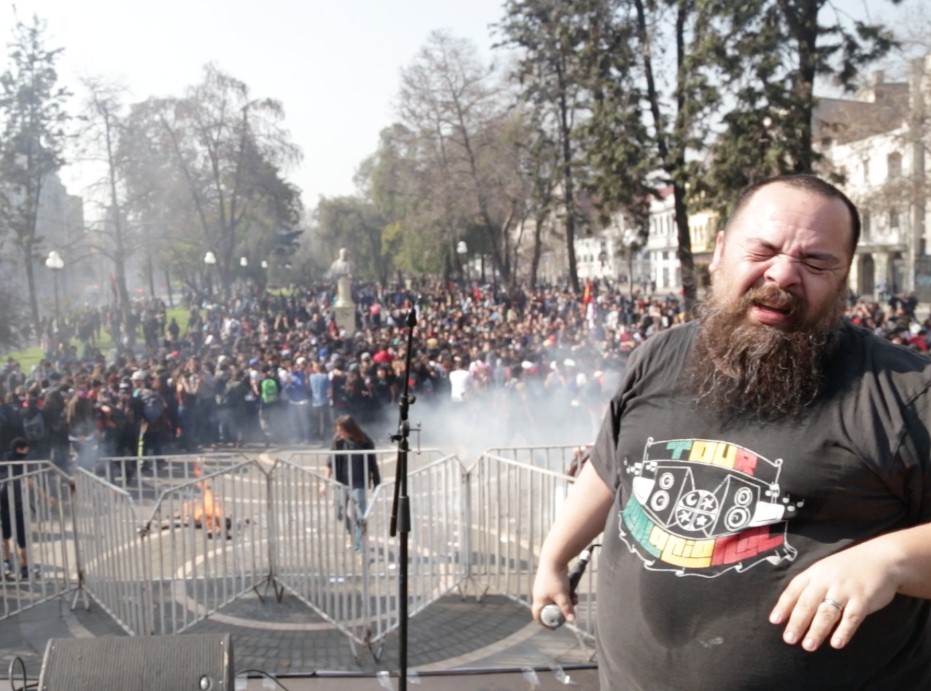 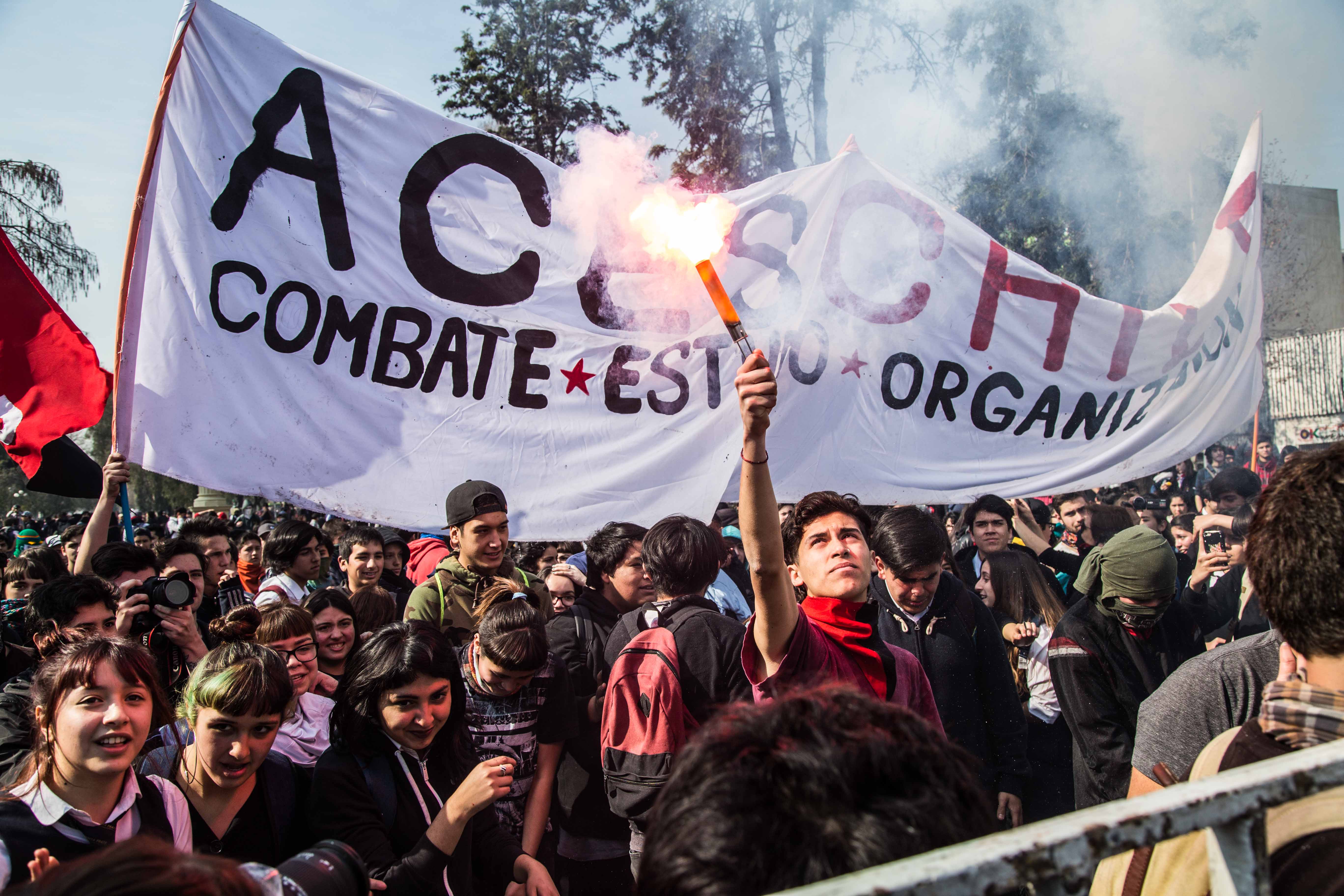